The Diamondbacks continue to struggle in all aspects of their game, dropping their tenth contest in the last 12, with a defeat at Dodger Stadium tonight. It was never going to be easy, Ian Kennedy facing the reigning National League Cy Young winner in Clayton Kershaw, but the game was largely decided by fundamentals. Both teams had a solo home-run: the Dodgers scored their other two on an RBI ground and sacrifice fly, while Arizona had another runner thrown out at the plate, and Kennedy gifted Los Angeles two bases, directly leading to their first run. There are reasons one team is in first, and the other six games below .500.

First inning. Dee Gordon gets on base. Obviously, a threat to steal, and Ian Kennedy pays close attention to the man on first. Unfortunately, the throw over was not so attention-filled, sailing past Paul Goldschmidt, and up the first-base line into right-field. Gordon motors around to third, easily scoring on a groundout. Second inning. A.J. Pollock leads off, ropes a bullet back into center, and is bunted over to second by Kennedy. Willie Bloomquist dumps a bloop single into center field, but Pollock gets a poor jump. Worse was to follow, as Matt "The Windmill" Williams - reviving a nickname for previous third-base coaches - waves Pollock around, and he's out by a mile at home.

Perhaps the most amusing Fail (in a sad way) was the bottom of the third inning, with Kennedy pitching to Kershaw, leading off. You may remember last year, where Kershaw and Gerardo Parra got into it, the former hitting the latter. Oddly, this - rather than the multiple times Justin Upton has been plunked - was deemed worthy of retribution. But when Kennedy threw at Kershaw. he missed him. Twice. And ending up walking the opposing pitcher. I give you the 2012 Diamondbacks, the Four Lions of baseball revenge and retaliation. Mind you, Kershaw failed to hit Kennedy in the fifth, and ended up walking him too. A "draw in a pillow-fight," according to Grace. This may or may not be over.

Through the first five innings, this was otherwise one of Kennedy's best starts, as he allowed three hits and only the semi-unearned run [yeah, I tend to agree with Songbird: runs that result from a pitcher's error should count against his ERA]. However, he missed his spot and surrendered a homer in the sixth, to some guy who might have a vague connection to Arizona - there was a passing reference to it from Grace and Sutton. More missed spots led to two singles, the second on a beautiful hit and run, and a sacrifice fly = 3-0 Dodgers. Six hits in six with, two walks and five strikeouts, was Kennedy's final line. The D-backs are now 1-4 in the last five quality starts from their rotation.

Unfortunately, the D-backs were even more stymied by Kershaw, They had their share of base-runners, on four hits and three walks, but failed in the clutch - the only hit with runners in scoring position was Bloomquist's bloop, which led to an out anyway. Once again, the heart of the order failed to produce for Arizona, with the third through sixth spots in the order, combining to go 1-for-15 with five strikeouts [though Paul Goldschmidt was robbed of a walk in the ninth by a horrible call on a pitch nowhere near the plate], Miguel Montero was 0-for-4 with two K's, and over his last eleven games, is hitting .194 (7-for-36) with seventeen strikeouts.

Aaron Hill was the only Diamondback to reach more than once, drawing a walk, and breaking up the shutout with his fifth home-run of the season, a solo shot in the eighth on a high fastball. Finally, someone has tied Chris Young for the team lead in home-runs - Young, of course, hasn't played in more than two-third of the team's games; however, he is on his way back, going 1-for-4 with a double for Visalia this evening. So there's that. Nice outing by Craig Breslow out of the bullpen as well, allowing one hit over two scoreless innings, with three strikeouts. He has got his season ERA down to 1.45, and has 16 K's in 18.2 innings. Difficult to argue with that.

I'd be lying if I said this defeat was in any way unexpected. Kershaw has been better than Kennedy in just about every start this season, and that's reflected in their ERAs of 2.22 and 3.81 respectively. Add in the horrible struggles of so many spots in the Diamondbacks' lineup of late - their collective OPS in May was .678, coming in to this game, not much more than Willie Bloomquist's career number of .651 - and this looked like a struggle. But the Diamondbacks certainly didn't help themselves, with bad base-running/coaching, bad defense and poor at-bats in the few scoring chances they had. Got to do the little things right, when facing the reigning Cy Young winner. 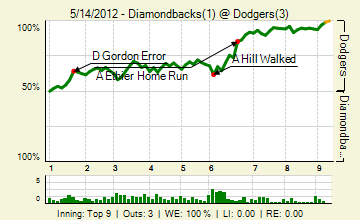 The most rec'd comment appears to refer to something called "Arrested Development." I do not know what this is, so it's not getting Comment of the Night. Instead, it's the other green comment, provided by hotclaws, which has a strangely poignant, yet pithy quality:

Knock,knock
Who’s there?
Opportunity
We’re the D,backs,so just eff off.