Welp. That wasn't much of a way to celebrate Mother's Day. It was a bit like popping round her house, and opening the doors for a horde of barbarians with muddy feet, to carry our a home invasion and trample her prized begonias. The Diamondbacks' pitching gave up 14 hits to the Giants, but could muster only five off Barry Zito and his crew, and Arizona dropped their fifth consecutive home series.

Joe Saunders struggled for his second consecutive start, and when it it went south, it went south quickly. He had retired the Giants in order, without much difficulty, in the first two innings, and the Diamondbacks offense had shown early signs of life against Barry Zito. They had loaded the bases in the first, though Cody Ransom had shown why he 5,717 minor-league plate appearances, demonstrating an inability to handle the off-speed stuff. And Arizona had taken the lead on the second inning, on a Jason Kubel RBI single - one of three hits he'd have in the game, taking his season average back up to a team-leading .304.

That was as good as this afternoon got for Arizona fans. For by the time Saunders got the first out in the fifth, the Giants had scored six runs on nine hits and a walk. It only took Saunders 73 pitches through five innings, but it was a no-brainer for Kirk Gibson to go to the 'pen, with Josh Collmenter allowing one run over his three frames of work. I don't think Joe is as bad as this week has shown him to be, but with his season ERA now sitting at 3.43, it's safe to say that the good luck which helped him in April. like a .217 BABIP, has now regressed - his BABIP over the last two starts has been .395.

Getting that third out was too much of a problem. Four of the six runs off Joe came with two outs, which has been an issue for all AZ pitchers this year. Last year, in the NL, 37.8% of all runs were scored with two outs. For Arizona, the number this season is now 43.0% - coming into today's game, opponents were hitting .279 with two outs, compared to .259 and .233 with one and two men gone respectively. Today, a key example was the fourth. SF were 2-1 up, and had men on the corners with no outs. Saunders almost escaped on a hard ground-out to third, intentional walk, and the force-out at home shown on top. But the two-RBI single that followed was soul-destroying.

Large chunks of the Diamondbacks offense also continued to struggle. We'll get to them in a moment, but the bright spots were probably Kubel and A.J. Pollock, who reached safely three times on a hit and a couple of walks. After a terrible start to his major-league career, with one hit in his first nine games, he has begun to turn it around. Though that wretched beginning means his season BA is still an unimpressive .256, over his last eight appearances, he is 9-for-21 with a solid K:BB ratio of 4:3 over that time. Any games he starts, I'd be penciling his name into the leadoff spot, before anything else.

And then there's the bad, which would be just about everyone else, with the exception of Ryan Roberts, who had the only other Diamondbacks hit, drew a walk and scored a couple of runs. The third through sixth spots in the Arizona order this afternoon combined to go 0-for-14 with five strikeouts, three off the bat (or rather, the air around the bat) of Paul Goldschmidt. In the six games of this home-stand, the team managed a total of only 19 runs, while conceding 35, hitting .249 and striking out more than three times as often as they walked. Since sweeping the Giants to open the year, we're now 4-12 at Chase Field. It's a relief to be going on the road again.

It's worth looking at the line on top of this recap a bit more. The 2012 Diamondbacks, expected to contend in the NL West, are currently on course for the fourth-worst win total in franchise history. And yet, at the same time, they had exactly this record after 35 games in the 2011 campaign, so it's clear things can still be turned around. However, there's a gulf between "can" and "will". While the team should start to see people coming back off the DL this week, there's a limit to how much that will help. Looking at the depressed expression of the Arizona dugout in the later innings, suggest that the 1920's incarnation of Babe Ruth could come back, and this team would still struggle.

Interestingly. Kevin Towers suggested that personnel changes might be in the offing if the team's current struggles continue. Some discussion in the Gameday Thread as to what that might mean, mostly centered around the corner infield positions. Of course, the question of who would replace them is another matter... 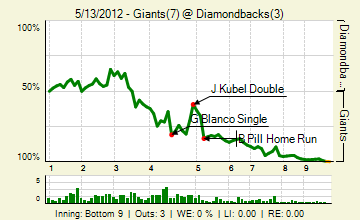 A light GDT, a lot of people likely having mother-related things to do. imstillhungry95 and Rockkstarr12 - not present for this Saunders start (probably a good thing) - combined for about half the comments between them, with blue bulldog in third. Also taking part in the day's "festivities", and I'm using quotes quite deliberately: Dan Strittmatter, asteroid, snakecharmer, AzDbackfanInDc, Clefo, Jim McLennan, hotclaws, rd33, Britback, Turambar, txzona, dback4life, SongBird, Bryn21, PR151, dbacks79, CaptainCanuck and edbigghead.

No comment of the day. The only one to receive more than a single rec was rd33's suggestion that Barry Zito was the more expensive Jamie Moyer, and in the light of subsequent events, giving that CotD would be like firing off both barrels at your own extremities. Hey, tomorrow, we get to face the division-leading Dodgers and their ace, Clayton Kershaw? What could possibly go wrong?