What's Wrong With The 2012 Diamondbacks?

Share All sharing options for: What's Wrong With The 2012 Diamondbacks? 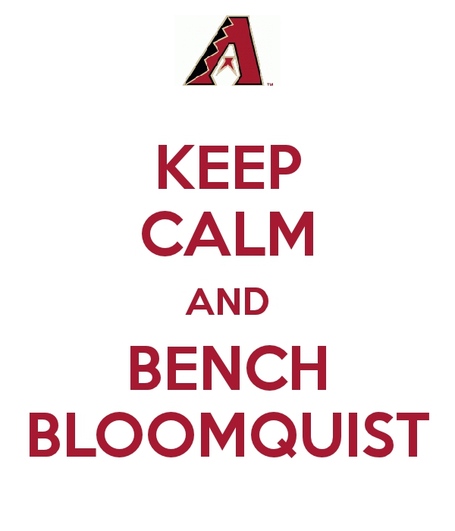 Only four teams in the National League have a worse record than the Diamondbacks' 14-18. That's the stark reality of a front 20% of the campaign which, while certainly subject to external forces, has been almost entirely disappointing. Indeed, since the first week, when we beat the Giants and Padres, things have been worse still, with Arizona's record after that point a dreadful 9-17. Finger-pointing and assigning blame is not helpful. However, it is remarkably therapeutic, so that's what I'll do after the jump, in no particular order, picking on players, situations and other aspects of the Diamondbacks which have been found wanting to date.

Health. As former scout Bernie Pleskoff put it on Twitter, "Can't start a car if engine is gone." The losses of Chris Young, Daniel Hudson and ongoing absence of Stephen Drew have certainly proved problematic. While those who have replaced them have performed adequately, you can't expect replacement players to be of the same quality. Young has barely played in one-third of the team's games to date. But to this point, he has still generated 50% fWAR more than any other position player for the Diamondbacks. We need him back, a healthy Hudson working as he did last year, etc. But if we keep playing the way we have been, the start of June might be too late.

Bullpen Blowups. In the last third of games, the Diamondbacks are allowing opposing hitters to post an .800 OPS, with 16 home-runs allowed already . Both figures are the worst in the league, and the OPS figure is 115 points higher than the comparable figure last season. That's a key ingredient in why the team has lost four games they were leading after seven, which matches the number from 2011. In particular, Closer J.J. Putz has allowed four home-runs in 10 innings of work. Sure, small sample size - but the ten earned runs he has given up to date is a mere four short of his tally from the entire previous campaign, when he threw 58 innings.

Where are the Never-say-Diemondbacks? Arizona hasn't just blown leads - half of their losses, they were leading at some point - they haven't been able to overcome deficits. Last year's team had 48 comeback wins, and 21 times, they won when tied or trailing going into the eighth inning. This year, as we hit the one-fifth mark of the schedule, we have only five comeback wins, with two late victories. The offense is as much to blame as the pitching: our hitting is also dead-last in the league during innings 7-9, with a pathetic line of .214/.289/.294 over the final stages. The net result is, we've been outscored 36-15 in the eighth and ninth frames. That won't get you comeback wins.

The evaporation of Josh Collmenter. I don't know what our prospects' off-season regimes are like, but that's two seasons in a row we've seen a starting pitcher apparently lose it during the winter. And we all swore that Collmenter was different: he had decent peripherals that suggested sustainability, rather than smoke and mirrors. Major-league hitters, however, begged to differ on this point, belting him to the tune of a .965 OPS in his starts. That was on the heels of a spring training campaign which provided evidence that stats there can sometimes foreshadow what will happen in the regular season.

Willie Bloomquist. Question #1. How the heck did we get into a bidding war with the Giants for Willie B's services? Question #2: Why did we win? For what's not to love about the man? He's hitting .209, can't get on base, has no power, mediocre defense and is a liability on the base-paths. But cheer up! There's only 292 games left on his contract! And things could be worse, too: his .576 OPS is currently better than 22 major-league players with 90+ PAs, including Chone Figgins, Jimmy Rollins and Albert Pujols, who are earning $32 million combined this year. That's a lot more than Willie.

Hitting or pitching? It has been a bit of both so far, but the blame scales incline somewhat towards our pitchers. In 2011, the Diamondbacks scored 4.51 runs per game, which was 0.38 more than league average. This season, that has dropped to 4.12, compared to an average of 4.04, so they've lost three-tenths of a run compared to league average. Their pitching has gone the opposite way, from allowing 4.09 last year to 4.47, which is a larger increase, of about half a run, again when it's measured against league average. Both starters and relievers have seen their ERAs increase, by roughly the same amount.

Home field disadvantage. The 32 games played have been evenly split between home and road, and scoring by Arizona has been not far off equal: 63 runs scored at home, 69 on the road. But it's what we have allowed at Chase that has killed us - 90 runs, compared to only 53 elsewhere, giving us a home ERA more than two runs worse than when we play out of state. The home-run has been particularly brutal, with 24 long-balls allowed in Phoenix, and only eleven everywhere else. But an opponent's batting average here of .287, fifty-seven points worse, suggests the problem is not just the bombs we saw in the Cardinals' series.

Turning Goldschmidt into Leadschmidt.Right alongside the disappointment at Upton's performance, has been that felt at Paul Goldschmidt's sophomore slump. Pre-season hopes were high that he would become the power-hitting first-baseman the team hasn't had for some time. But it has been 86 at-bats since his last home-run, and a line of .218/.289/.322 shows the power hasn't been converted into contact or plate-discipline. He's part of the reason the team is back to leading the league in love strikeouts, though both Miguel Montero and Jason Kubel are whiffing at an evern higher rate than Goldzilla this season.

April is the cruellest month. There has been grumbling over the schedule faced by Arizona, in comparison to that of our rivals. Some of this appears to be justified. ESPN rate the D-backs' Strength of Schedule at .502. That's not exactly brutal, and is ranked 7th in the National League. But it's a good deal tougher than anyone else in the West; the rest cf the division come in at 13th (Giants), 14th (Dodgers), 15th (Padres) and 16th (Rockies). Put another way, the four easiest schedules thus far in the entire league, all belong to our divisional rivals.

Some of these should sort themselves out over time, e.g. we'll get players back, and the schedule should even itself out, more or less, over the course of the year. I also have faith that Upton will sort himself out: there's just too much talent for it to be otherwise. But the late-inning losses are a concern, with the team apparently not having the mental appetite which, last season, translated into a sense that they never gave up. I'm not feeling that from the stands this year: at Chase on Monday, almost as soon as Rafael Furcal's lead-off homer left his bat, the sense of deflation was palpable. Last year, coming back was almost a given. This season, it's more an unexpected shock.

Let me be clear: the season is not over. Far from it. But there are a lot of problems, which have resulted in the current 14-18 record, and one wonders how much further things will go on, before Something Is Done. The upcoming series against the Giants will be key. They're one of the few teams worse at hitting left-handers than Arizona, and we send up two of them, plus Trevor Cahill. Having won our last eleven billion games (approximately) against the Giants, it could be a chance for Arizona to get back on track. But if we don't, the calls for the team to free Trevor Bauer and his prospect brothers will become even louder.