With Geoff Blum, Stephen Drew, Daniel Hudson, Takashi Saito and Chris Young all currently on the disabled list, the Diamondbacks are over half way to being able to put out a team of wounded warriors. They're making their way back from the infirmary - some of them at a rather better rate of progress than others. After the jump, you'll find the latest updates on all five of the Arizona DLBacks.

Geoff Blum
Blum was laced on the 15-day disabled April 18 with a strained left oblique, which he tore during batting practice. "The only person I can be mad with is myself, but it's just one of those freak things," Blum said at the time. He was moved to the 60-day DL on April 30th. The latter move was necessary, in order to open up a spot on the 40-man roster for Patrick Corbin - players on the 15-day DL still count as using a 40-man roster slot, but 60-day players don't. That means Blum is now not eligible to return until mid-June at the very earliest, the far end of the original estimate of 4-8 weeks. 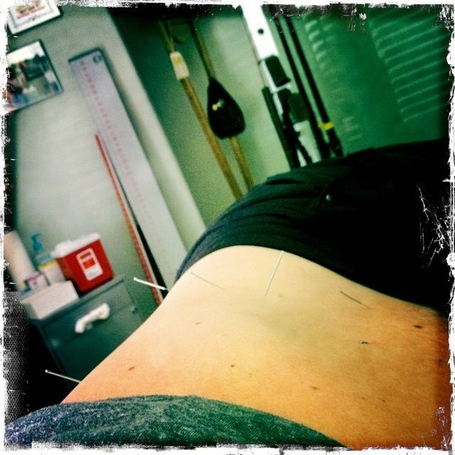 There hasn't been much in the way of progress reported since. Geoff did Tweet a pic yesterday of him undergoing acupuncture, to try and speed up the healing process. However, a very significant question is whether there'll be any space on the 25-man roster for him at that point. It was mooted before the season began that Blum would likely be on the bubble whenever Drew came back, and managing one hit in 11 at-bats before his injury, did little to improve the position. Indeed, the way Cody Ransom has been hitting of late, he's probably preferred to Blum, but any decision there is still at least a month away, so plenty of time for situations to change.

Stephen Drew
It's approaching ten months since Drew suffered a fractured right fibula while sliding in to home plate on July 20 last year. The process of rehab was always going to be a lengthy one, but there does appear to be steady progress - the original estimate was up to a year, so we're still apparently ahead of schedule. He played five innings on Tuesday at Salt River Fields in extended spring training, and went 2-for-5 with an RBI triple and run scored - it's definitely a good sign that he's apparently capable of legging out the three-baggers, though reports suggest he has yet to slide into base. ArizonaSports.com had footage of Drew's most recent outing

Drew is currently playing about every second day, so is scheduled to appear again today, and then on Saturday. There's no timetable for his return, but our short-stop recently said, "It's coming along really well. Hopefully that pace continues. It's still sore, but at the same time it's gotten better. Not like it used to be, I've came a long way. It's good to see some bounce back after working hard." As well as sliding, which Drew thinks will be "a week or two," a big step will be getting him into games on consecutive days,. and seeing how his ankle reacts to the additional strain.

Daniel Hudson
Good news on the Hudson front, with our starter throwing off the mound on Tuesday for the first time since he went on the disabled list with a right elbow "impingement" on April 19th, the day after starting for the Diamondbacks against the Pirates. Going by Hudson's reaction, the session represented a psychological hurdle for Hudson, as much as a physical one. "The biggest step where you are dealing with something like this is the first time you throw and the first time you get off the mound. You have some bad thoughts going through you mind. 'What happens if this happens?' For the arm to feel as good as it did today is a huge positive. It’s one more step closer."

Hudson threw 30 pitches, and is scheduled for one more bullpen session before moving on to facing live hitters. Gibson said, "We'll see how he feels tomorrow, If that's good, he'll throw a bullpen [session] probably in two days then in three days he might throw live. If he doesn't feel so good, we'll do two bullpens." From there, if all goes well, it will largely be a question of getting Hudson's pitch count back up to the level it was before the injury. Jack Magruder speculated Huddy could be back in the rotation by the end of the month, but the key words would be "if all goes well." "It’s hard, especially because it’s the first time dealing with anything like this," Hudson said.

Takashi Saito
This is a weird one. Saito was originally placed on 15-day DL at the start of the season, with a strained right medial calf. Initially, it seemed like he wouldn't be out of action for much longer than a couple of weeks, and on April 17, Gibson said, "When he feels like he's ready to go, I'd probably ask him if he'd go down somewhere in the Minor League system to pitch a time or two and see how he covers the bases." Two days later, Saito worked a scoreless inning for Single-A Visalia, allowing a walk and a single, but while doing drills the following day, his calf stiffened up and his rehab process came to a sudden end.

Kirk said at that point, ""He's on the shelf. It's a setback. He's not ready. We'll bring him back here, keep his arm going and get the calf healed. It's not healed now." Since then? Absolutely nothing. Caution is understandable, given Saito's long track record of injuries - he made only 30 appearances last year, and hasn't had a truly healthy campaign since his "rookie" season, as a 36-year-old, in 2006. But most calf muscle tweaks wouldn't seem to need six weeks of rehab, which is where Saito is at this point, with no end in sight. This signing could end up being a roll of the dice where Arizona comes up snake-eyes.

Chris Young
He might be the first returnee from the sick bay, with Jack Magruder writing on Monday that CY "could return in two weeks." That will be welcome news - he still leads the team in home-runs, even though he hasn't appeared for more than three weeks. He went through a workout at Chase on Monday, which involved Young throwing from about 120 feet, running and taking around fifty swings in batting practice. Nick Piecoro said Young was "almost giddy" after the session, saying "A few days ago I didn't know if I'd be able to do all of that, but... you get the GM behind you while you're hitting BP, it kind of fires you up and puts you in a different mind-set. It was an extremely positive day."

Manager Kirk Gibson was more cautious: "He's come a long way, but he has a ways to go... We want to make sure he's ready to come back and play at full speed. I think he still favors it and is not 100 percent comfortable with it yet, certainly not with his throwing." Young didn't quite agree: "I treated it like a normal day. I didn't overdo it. I didn't baby it in any kind of way. I'm just happy I can do everything baseball-related and not look like I'm guarding it.." Guess you didn't quite fool Capn' Kirk there, Chris. :) "My own timetable is as soon as possible," he added. We're down with this, and it looks like he'll join Drew in an extended spring training game at Salt River Fields today.