There was some surprise when Josh Collmenter was announced as the #3 starter, especially as dismal pre-season performance followed dismal pre-season performance. But, hey, it's only spring training, right? It doesn't mean anything? Well, today's game did, and the result were, if anything, even uglier, as Collmenter allowed six runs in three innings of work, to put Arizona in a 6-0 hole. I started work on the recap. But I should have known better, as Arizona clawed themselves out of a six-run deficit (without the aid of supernatural help) to complete the sweep of San Francisco.

I'm revising the recap quite heavily. :) Given the GDT ran long, please discuss the incredible contest here, while I make some minor changes. Here's a brief summary of the game, however: if there's a better victory this year, I want to see it.

Can I just say, "Woooooooo"? Thank you. It's amazing how things can turn around. When Arizona were 6-0 down, I would have accepted defeat with a shrug and a "Can't win 'em all." But the more the team came back into things, the more I wanted them to complete the recovery. When they tied things up, the result suddenly mattered in a way that would have been inconceivable only a couple of innings previously. And after they took the lead, if the Devil had sidled up to me and offered an assurance of victory, in exchange for donating our puppy to Dr. Josef's House of Medical Fun.... I'd have thrown in the basket and helped Lucifer to his car. But let's start at the other end.

The big pre-game discussion was, would Collmenter be able to address his spring struggles? Nick Piecoro Tweeted that the team had noticed an issue with Josh's arm slot being lower during the Cactus League, and believed that was responsible for the problems. Certainly, the first inning was a marked improvement, as he retired the first three hitters in order, on two strikeouts and a ground-ball to first. He had a lengthy battle with Cabrera, before finally getting the swinging K with the tenth pitch of the at-bat. The SnakePit breathed a collective sigh of relief - though as we'll see, both that and the team's belief would turn out to be horribly premature.

The Diamondbacks had a chance, once again, to get on the board in the bottom of the first. Willie Bloomquist singled and then tried to steal second. Any kind of decent throw would likely have nailed him, but St. Buster made his second error of the series, wrong-footing the Giants' SS and Bloomquist scurried to third with no outs. Aaron Hill did put the ball in play, but his shallow outfield fly wasn't sufficient to get the runner home. It was, however, a better effort than Justin Upton and Miguel Montero managed, both going down swinging, to strand Bloomquist at third, and for the first time, the game remained scoreless after one.

That seemed to shift momentum into the visitors' dugout, and the second inning was completely different, with Collmenter's mechanics a lot more wobbly, and he failed to finish his delivery properly, leaving pitches up. A single and a walk started things off, and one out later, a double down the left-field line scored both runners after Gerardo Parra bobbled the ball badly, then over-threw the cutouff man as he tried to show off the Parrazooka, allowing the runner to reach third. That set up the squeeze play, which was safely executed, and the Giants suddenly had a three-run lead, though at least some of that was probably more on Parra than Collmenter.

You couldn't say that about the third inning, as a ringing double off the right-field wall and a bloopsie from Kung Fu Sundae was followed by a bomb the other way from Posey. While there was no further damage, that inning marked the end of Collmenter's day, and the questions which were being asked before Opening Day have suddenly become a lot more pointed. How long a leash does Collmenter get? If he struggles next time, do we swap him and Wade Miley in the rotation? What about the uber-prospects pitching in the minors? How long before we turn to Patrick Corbin, or call up CTU and ask for Bauer?

We may have got something of a glimpse of the future this afternoon, with Miley replacing Collmenter for the fourth inning, and e did a very solid job through the first two frames, not allowing a hit. However, he wasn't helped by the D-backs fielders, who made him get not just a fourth but a fifth out in one inning, courtesy of errors by Miguel Montero and Ryan Roberts, and then Aaron Hill booted what looked like a sure-fire double-play ball. Roberts did redeem himself with a snatch of a butcher-boy swing off the bat of Cain, and nailing the lead runner at third, though Bloomquist's throw to 1st failed to get the batter there and allowed the runner on first to go all the way to third.

Still, Miley escaped that with a strike-out and ground-ball, and ended up giving Arizona four scoreless innings when they really needed them. It's worth comparing the lines of our two "starters" this afternoon:
Collmenter: 3 IP, 5 H, 6 R, 5 ER, 1 BB, 4 K
Miley: 4 IP, 0 H, 0 R, 0 ER, 2 BB, 1 K
If you looked only at the peripherals, e.g. K:BB ratio, you'd think that Collmenter had the better day, but on the day, it was undeniable. Miley allowed the offense a chance to dig themselves out of the six-run deficit, and there's certainly a case that the gulf in performance should lead to an immediate change.

The Arizona hitters were basically unable to solve Cain early on, save the honorable exception of Bloomquist, who added to his lead-off single with a double in the third. The D-backs did make some noise in the fourth, two runs being driven in by the much-maligned Lyle Overbay, with a crisp drive down the right-field line for a double after Montero and Chris Young had reached base. And the sixth then saw Ryan Roberts and Overbay went back-to-back, pulling Arizona back within one run. But could they close that gap?

Of course they could. Who am I trying to kid? These are just a new incarnation of the Arizona Comebacks, with a couple of new faces but the same indomitable resolve. The 7th was interesting, as the defensive incompetence that had plagued Arizona for five errors shifted to the visitor's dugout. Jason Kubel got his first Arizona hit, going the other way to left-field though Bloomquist then hit into a fielder's choice. Aaron Hill walked, and Justin Upton repeated the process - Fat Raccoon seemed somewhat upset with Willie, seeming to indicate that he might have been stealing signs and passing them to J-Up. The two exchanged words as Bloomquist trotted to third.

Miguel Montero then hit into what could well have been an inning ending double-play, but the Giants' SS booted the ball, and the game was tied. Chris Young then hit another ground-ball and the play was at the plate, but St. Buster decided it was wiser to let the go-ahead run score, having his foot off home-plate when he caught the ball - replays proved the umpire's got the call dead right. A Roberts double-play ended the game, but the D-backs had clawed their way back and taken the lead. The question now was, with J.J. Putz and David Hernandez both having pitched on Friday and Saturday, who would be used Sunday?

Your answers: Craig Breslow and Bryan Shaw. Breslow didn't exactly make a great first impression, his first pitch sailing over Miggy's head and the second bouncing at about the 55-foot mark. He walked the leadoff batter, but got a double-play when it was needed. Shaw retired the first two in the ninth easily, before a broken-bat single put the tying run on base and Fat Raccoon to the plate. The pull of Planet Sandoval sucked in a pitch to its gravitational well, putting two aboard for St. Buster. But three pitches and three strikes later, LOLPosey went down swinging. Shaw getting his first major-league save and cementing a truly epic victory.

For the record that brought an end to the Giants' streak of 25 consecutive victories when scoring six or more runs. Here's the Fangraph, which can also be used as a teaching aid to illustrate the U-shaped valleys formed by glacial erosion... 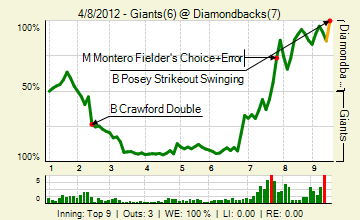 I enjoyed the Jekyll and Hyde-like personality of this afternoon's GDT. Early on, it was like The Hunger Games in there, as we tore each other's throat out over Collmenter's performance, unearned runs and whatever else. The Fangraph is a good representation of the tone of the discussion too: by the end, it was all hugs and smiles, like a My Little Pony convention on ecstacy. I'm really looking forward to seeing how McC reacted to this one. I think I should probably bring a knife of some sort. Three players reached three digits, with blue bulldog top, followed by txzona and clefo. The full roll-call of the rest deserves a paragraph to itself, I think.

why is Lyle Overbay playing?

The latter came just before Overbay's homer, one of his three extra-base hits this afternoon. Any questions? Indeed, it was a good day for the oldsters all round. As well as Overbay, Bloomquist got two knocks and stole a base, while Parra went 0-for-3 and picked up an error in his debut start, and Goldschmidt struck out coming off the bench. This wasn't a pretty win, but we'll take it. There can't be many times a team has watched their starting pitcher allow six runs in three innings, made five errors, and gone 1-for-13 with runners in scoring position [including squandering a pair of man on third, no outs situations] but still come out on top.

It's a well-deserved off-day for the team, and they then head on the road for their first road trip, which takes them to Colorado and San Diego. The start of the season couldn't have gone much better, sweeping a divisional foe, though I don't think winning all our games by one run is sustainable somehow... That said, there's 159 games left, and it's tough to see how there will be a game quite as memorable as this one. Prove me wrong, D-backs!