Intro by Jim. This one had some eerie similarities to yesterday. In both, Arizona jumped out in front early, on a pair of home-runs, then watched the Giants claw their way back into things. The starter - Daniel Hudson today, instead of Ian Kennedy - went 6.2 innings, flagging a bit at the end, and the bullpen held on for the victory, by the score of 5-4. Of course, Aaron Hill probably much preferred this game...

The first inning, with our raking pitcher Hudson on the mound, started splendidly. Pagan and Cabrera made outs on ground balls, Sandoval struck out, swift and deadly. Then the Diamondbacks, still happy from yesterday, came out ready and willing. Roberts grounded to Sandoval, but the 2nd at bat worked i's magic again, with Hill this time launching a home run. Upton drew a walk and Montero also got on base before.Young, with a searing double, got Upton home. Bumgarner wanted nothing to do with Goldschmidt and intentionally walked him, but unfortunately Kubel ground into a double play. Still, two runs up is always a pleasant start.

Hudson then took care of Posey, Huff and Belt in no time at all and the D'backs came out hungry for more of the same. McDonald struck out but Hudson laced a single - no flukey hit, an honest to goodness at bat. Roberts flew out again, a little unlucky but.Hill was up and calmly launched another long bomb, his second in consecutive at-bats. Upton singled but Miggy could do nothing .By this time Bumgarner was on 52 pitches. In the 3rd, Bumgarner did a Huddy behind Theriot and Crawford who could do nothing - nor could Pagan advance him. If inspired by his hit,the Giants pitcher sent the next three D'backs down easily.

In the 4th, Cabrera singled then Sandoval homered to make the score 4-2, but no-one else managed to score, though they had a chance to build a big inning. Bottom of the 4th: McDonald could do nothing, Hudson singled again, but Ryro - still a tad unlucky - popped up by the fence and Hill was caught. The 5th saw McDonald rob Crawford with a great catch, then the Giants took their best hitter (Bumgarner) out and put in Schierholtz, who only managed to pop up, and Jup caught the Pagan.One again. The Diamondbacks had forced the opposing pitcher out early.

Then, they poured more pressure on Otero, making his Major League debut, with Miggy singling and taking second on a wild throw from Posey, which allowed CY to get him home with a hit. Unfortunately Goldschmidt struck out; after Kubel was intentionally walked, and McDonald couldn't get anything going. In the 6th ,the Giants went down tamely but there was some excitement in the bottom of the order when Huddy laced one back at the pitcher. Roberts at last got a hit, but to no avail. Score still 5-2.

In the 7th, Belt was walked, Theriot SO, and Crawford was caught by CY, but then Hudson had to swallow a bitter Pill as he came in to pinch-hit for Otero and promptly homered, making it a 5-4 game. That was it for Hudson, who had done enough to keep us in it, plus his two hits. Shaw got Pagan for the final out. Casilla came in for the Giants and though he walked Montero and gave everyone a nasty moment by hitting Young on the hand, no-one could score, Kubel breaking his bat as he remained ineffective today. Hernandez took care of the next with what appeared to be two pitches, it was all over so fast. Unfortunately, Javier did likewise.

So here it came. Top of the 9th, one run lead and JJ Putz in. His splitter was filthy and even substituting Blanco for Theriot didn't help and the Diamondback won by one run - or, business as usual. It was a brisk romp through in just over two and a half hours and is apparently the first time the team has started the season 2-0 since 2002. Let's hope tomorrow warrants bringing the brooms! 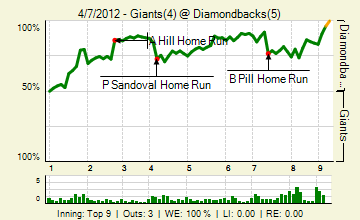