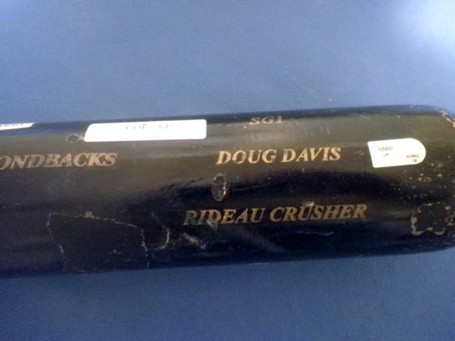 Up for sale is an Arizona Diamondbacks, Texas Rangers, and Milwaukee Brewers great Doug Davis game used bat. Not a signed bat. Bat was acquired directly from the Diamondbacks and comes with the Major League Baseball #'d Authentication hologram. (025922LH) This authenticates the bat as Game Used and can be verified on their site. Bat is cracked mid handle with a bit of missing wood but still in tact. It is a Sam Bat SG1. Lots of game use.

I was amused by this, simply because the concept here is so beautifully contradictory. Doug Davis was not exactly renowned for his hitting. In fact, he was epically bad. I cranked BR.com's Wayback Machine as far as it'd go without breaking - which took me to the start of World War II [note: when it actually started, not when you guys joined in later....]. In that time, Davis is the only player with 400+ PAs and an on-base percentage below .100. He doesn't have the worst batting average - that's the obscure Dean Chance, who hit .066 from 1961-71, which makes Davis's .083 look MVP-like. But DD's poor plate discipline wins him the overall prize, with an MLB worst OPS+ of minus 49.

He wasn't quite such a rabbit in his time with Arizona, though even that is entirely relative. Over 163 at-bats for the Diamondbacks, he got 18 hits, including a double and triple, driving in seven runs. That's a .110 average, which ranks him only third-worst among Arizona pitchers with 100+ PAs, ahead of both Miguel Batista (.100) and Claudio Vargas (.094). The latter's OBP and OPS were fractionally worse than Doug's as well, though Davis's scintillating K:BB ratio of 55:1 in the desert - yep, read that again, fifty-five to one - is likely going to survive all challengers for quite some time to come.

In fact, his career ratio of 175:4 is almost unparalleled as well. In baseball history, seven players, including Davis - not surprisingly, all pitchers - have a K:BB ratio of worse than 40:1, again over 400 PAs. The worst was Tim Belcher who struck out 149 times in his career, while walking twice. However, there could be a new leader before long, with Aaron Harang closing in quickly. He needs only three more strikeouts without a free-pass to improve his current 218:3 ratio sufficiently to overtake Belcher - and he's starting for the Los Angeles Dodgers tomorrow, so the milestone could be within immediate reach.

The 'Rideau Crusher' thing is kinda interesting. It was the original maple bat, first presented for the use of Barry Bonds during spring training 1999 in Scottsdale. From there, the concept expanded through baseball, but subsequent to the story linked above, the negative effects, in the shape of a much higher rate of shattering provoked concerns, not least in the D-backs booth. Yet, curiously, the piece, written in 2002, praises maple's durability, saying "Stories of seemingly unbreakable maple bats circulate like Arthurian legends." Doesn't seem to have been the case here, with the bat described as "cracked mid handle with a bit of missing wood."

Of course, there's no telling how long Davis used the bat for. The advert says "Lots of game use." and given Doug's fondness for the strikeout and taking his bat back to the dugout with him, it could have seen months of fruitless waving at strike three. The authentication information further down the auction information specifically mentions Arizona at Colorado on August 13, 2008, and Doug did indeed start that day. He didn't actual whiff either, grounding out to the infield in both the 3rd and 5th. He allowed four runs, three earned in five innings, but the loss went to an old friend, Jon Rauch, for the two-run homer given up to Brad Hawpe in the eighth.

Davis may have left the Diamondbacks now, and has taken his bats with him. Or not, considering he hasn't had a hit in the majors since his penultimate appearance for Arizona, on September 29, 2009. He's therefore currently riding an 18-game hitless streak, in which he has gone 0-for-26. And with Davis currently not employed by any team, that could be the note on which is major-league batting career ends.