There are non-believers who doubt the wave is evil, poo-poohing the suggestion that actions of fans in the crowd can affect the game on the field, or that waving your arms in the air (like you just don't care) and shouting "Wooo!" is a harmless pastime. To those doubters, I say, "Hah!" For barely had the left-field bleachers started their antics in the fifth inning, when the Giants went double, homer and the 3-0 lead, which had looked nicely comfortable, was now the slimmest of margins. "Correlation is not causation," the skeptics may mutter. I say again, "Hah!" I was there, and have absolute faith that the wave was directly responsible the two runs. Crucifixion's too good for 'em.

Still, we won. Woooo! But if I have to endure 161 more games like that, my digestive tract will resemble bubble-wrap by the All-Star Break. And not just because I was molested by Baxter... 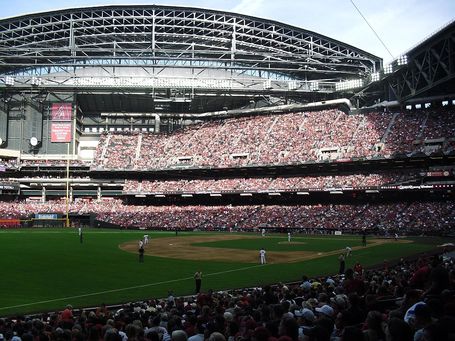 We opted to get downtown early, and Mrs. SnakePit and I met up with kishi and luckycc at the Rose & Crown. We arrived about 2:20pm, and it was packed at that point, but got a good deal less busy quite quickly, so we were able to move to a shady table. emilylovesthedbacks arrived a little later, having "enjoyed" the experience of taking the light-rail to a sold-out Chase Field. Official advice was to get there at 3:30, but we cheerfully disregarded this, in favor of finishing our BBC sandwiches [luckycc excepted] at the R&C. Despite concerns, there were also no real issues at the gate, and we got our free T-shirts as well. 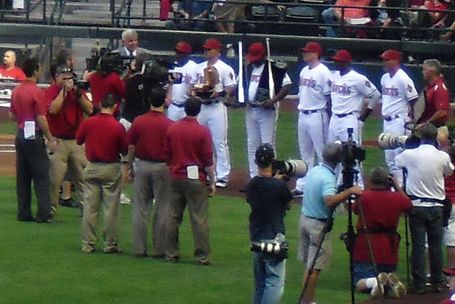 Despite our rampant disregard for protocol, we reached our seats [location kept private this time, to avoid further frothing accusations...] just in time to see the D-backs being announced. Interesting to compare and contrast the volume of cheers for the players: Ryan Roberts, Justin Upton and Geraldo Parra probably received the loudest ovations. They then presented the 2011 silverware: Silver Sluggers for Upton and Daniel Hudson, Manager of the Year to Gibby, and Parra's Gold Glove, accompanied by a nice montage on the Jumbotron of some of the plays which brought him the award. 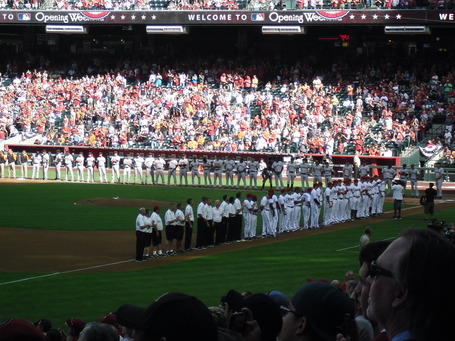 Was a bit concerned, walking to the park, that there'd be an unsightly number of Giants fans, but they were clearly in the minority. The unveiling of the 2011 championship banner in left-field was then carried out, by what seemed to be a dangerously-dangling Baxter, resulting in comments that I'm sure you can imagine. Then it was time for the National Anthem, sung by some chick from some show I've never watched, and never will. Took her time about it, almost 1:50 according to Steve Gilbert. Liked the flyover from Luke Air Force Base, as ever. Oh, and the coaches of U of A ("Boo!" go the crowd) and ASU ("Yay!" go the crowd) threw out the first pitches. 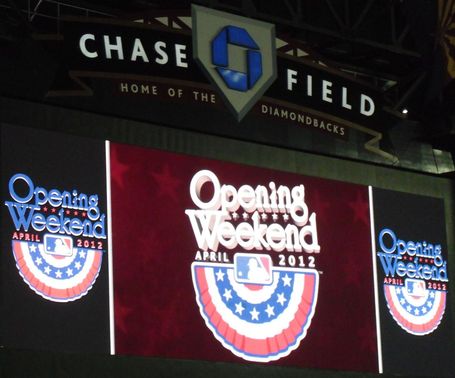 Was very glad to be sitting on the shady side of the ballpark, as the first-base side looked to be pretty exposed to the sun this afternoon. Even in the sixth inning, there were rows in the upper deck that were in direct sunlight, and there were occasional shots on the Jumbotron of people who were using the T-shirt giveway as an impromptu headscarf. A packed ballpark did also mean significant queues at the concession stands, particularly the beer ones it seemed - when I went to get Mrs. SnakePit a lemonade, there was no queue at all there, though the vendor seemed grumpy his stall was completely screened by the line snaking back from the neighboring stand,

It was on this trip that... that... that it happened. As I headed lemonade-wards, I felt someone rubbing the top of my head. Worse was to follow as a furry arm encircled my waist. Yes, as I enter my 12th year of attending D-backs games, my luck had finally run out: I'd just been Baxtered. Words can not describe the horror I felt at this gross violation of my territorial bubble, and I returned to Mrs. SnakePit, weeping inconsolably about this assault. I just trust the Diamondbacks will see fit to cover the years of therapy which will doubtlessly be needed to get over the trauma and subsequent PTSD. 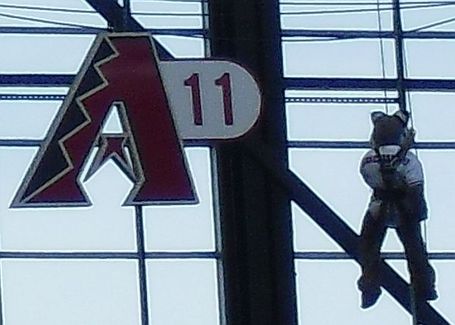 The first inning was quite epic, and it was a huge relief to get on the board first - it took the tension out of the early innings. I think the crowd was even louder for the Goldzilla bomb, though that maybe was just because it made me look like a genius, having just told Mrs. S how Paul owned Timmeh, 5-for-9 with two home-runs, blah, blah. I have to say, the Giants offense looked largely impotent, particularly early: outside of Posey and Sandoval, you just don't feel much of a threat when they come to the plate, while with our line-up, there's a sense of "anybody, any time". That said, they fought back to tie it up, discomforting the crowd significantly. Especially the wavers...

'charmer has already covered the game, but in the ninth, I realized exactly what I hadn't missed in the off-season. That would be our team, trying to protect a lead, and the opposition getting hits and chipping away at the deficit. Still, if J.J. Putz is going to give up a run, doing so with a two-run lead is probably the best time for it to happen, though I trust that 9.00 ERA will be heading down. Very nice of Posey to choke when his team needed him most: the rush of adrenalin, and random high-fiving of complete strangers which ensued, was more than adequate payback for all the trauma. Yes, even the inappropriate mascot touching! 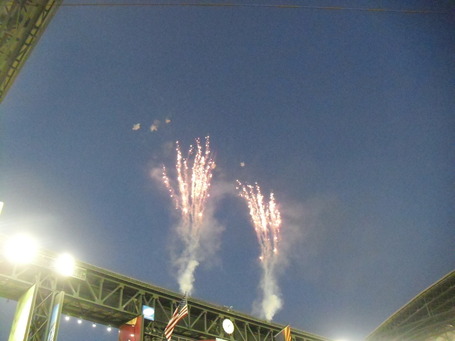