Diamondbacks 5, Brewers 3: Take Me Out To The Ballgame

Share All sharing options for: Diamondbacks 5, Brewers 3: Take Me Out To The Ballgame

Well, much as I'd have liked to stretch the tension out a bit longer - not least because I'm sure I could have squeezed a couple more posts on the topic - it looks like Josh Collmenter will be starting the season in the Diamondbacks rotation. The news, as posted earlier, that Patrick Corbin has been assigned to Mobile, follows on the heels of a solid, if surprisingly short performance against the Milwaukee Brewers at Chase Field tonight. Collmenter allowed no hits in his three innings of work, though did allow an unearned run in the third.

Admittedly, this was mostly a Brewers' line-up that had particularly failed to solve Collmenter during the 2011 season. Including his start against Milwaukee in the Division Series, they had managed only eight hits and one run off Josh in 21 innings, and tonight started off more or less the same way, as he mowed them down in order in both the first and second innings. He was throwing plenty of strikes and seemed to be locating the ball pretty well, He did run in to trouble in the third, as the Brewers loaded the bases and scored a run without the benefit of a hit, on a hit batter, error by Paul Goldschmidt as the ball squirted under his glove at first, a wild pitch, walk, and RBI groundout.

However, Collmenter got the necessary outs, and finished with three innings and one unearned run, though only one strikeout of the dozen batters faced, suggests he may not yet be entirely out of the woods. However, he did succeed in getting his pre-season ERA down into single digits, at 9.95, and this was far and away his best performance of the spring. He said afterward, "I felt really good. I just got back to basics and felt more like myself. The rhythm and tempo was there, and I think that was the big thing I was missing. I was trying too much to figure out why things were happening and I just got back to getting the baseball and throwing it." 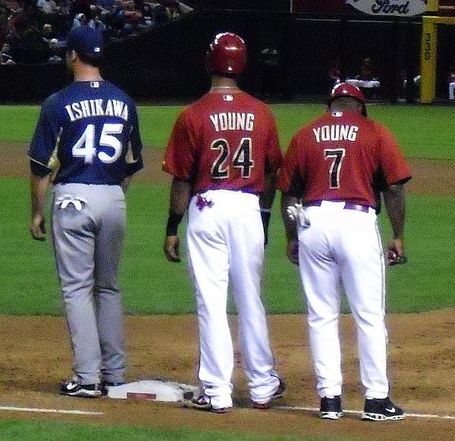 He was followed by Tyler Skaggs who looked impressive to start with, blowing the doors off Aramis Ramirez with a 95-mph fastball for strike three. However, as shoewizard pointed out in the Gameday thread, he seemed to hemorrhage MPH thereafter: a single was followed by a home-run on another fastball, this one a less impressive 91-mph. He loaded the bases with no outs in the sixth, but a foul out to shallow right-field and a double-play helped him escape damage, but by the time he faced his last batter, Skaggs' fastball was down to 86 or 87 mph, which is definitely unimpressive. Oh, well: that's why we have a farm system.

Skaggs ended with a line of five hits and two walks in three innings, with four strikeouts and two runs allowed. The expected members of the bullpen got rolled out thereafter, with Brad Ziegler and Craig Breslow putting up zeroes for the seventh and eighth inning respectively. Joe Paterson started the ninth, and initially struggled, with the first two batters reaching on a walk and hit batter, meaning the tying run was on base with no outs. He recovered to get the next two (both left-handers), but wasn't allowed to close it out. Instead, Thunderstruck was heard, and J.J. Putz got the save, though the Brewers #98 put up a brave fight, fouling balls off before grounding out on the ninth pitch. 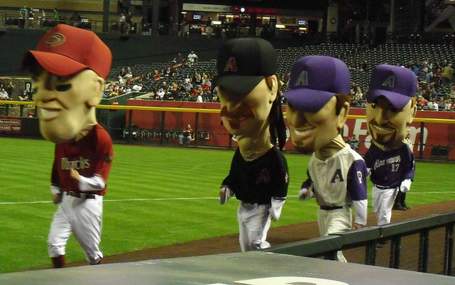 The victory, truth be told, was largely a case of our minor-leaguers beating up on the Milwaukee minor-leaguers. Arizona was trailing 3-1 in the middle of the eighth, but another player with a number approaching body temperature failed to retire any of the five batters faced, The last was Evan Frey, who crushed a ball down the right-field line to empty the bases, the three-run triple turning a 3-2 deficit into the final score. One of the runners who crossed home plate as a result was Jake Williams, who'd come in as a replacement at first-base for Goldschmidt. It's worth a mention, since he's the son of third-base coach Matt Williams...

The D-backs bats didn't have much success against Randy Wolf, especially after Ryan Roberts and Aaron Hill both reached in the bottom of the first to start things off. The next nine Arizona batters were retired in order, and the only run we got off Wolf was a kinda bizarre play in the fourth. With Chris Young on first and Justin Upton on third, Montero grounded sharply to first, for what looked likely to be a double-play as the 1B stepped on the bag and then threw to second. Young stopped in his tracks, headed back to first and ended up avoiding the rundown and safe there, with the ball coming loose - meanwhile, Upton came home to score. Weird.

Other vaguely player-y stuff of note. Our catcher Michael Perez showed off a cannon, nailing a Brewer trying to advance on a ball in the dirt, and almost getting another. Meanwhile, on the Brewers side, credit to outfielder Carlos Gomez. We were sitting two rows behind the Milwaukee dugout and at one point, he came out and lobbed some balls to the kids who were ballhawking in front of us. When his attention was brought to a kid who'd been left ball-less, he went down into the dugout and got another ball for that kid. It wasn't something he had to do, but the kid will remember that. And so will we. 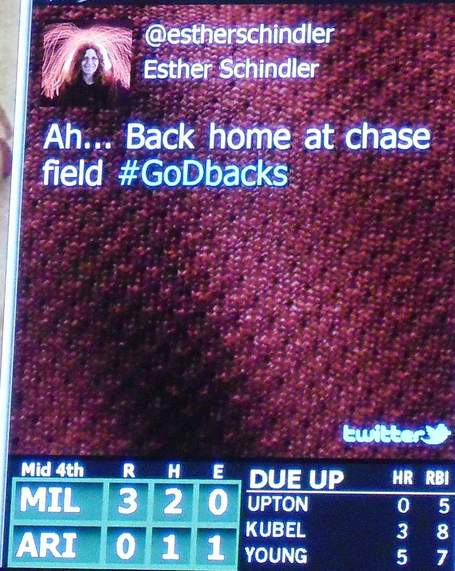 Apparently, we were on the Jumbotron, but didn't notice. Sigh. The asteroids were up there as well, immediately after an asteroid Tweet also made the big screen. Well, at least I have an excuse, managing to lead commentors on the Gameday Thread, while ducking foul balls, booing Ryan Braun and consuming Cold Stone. It's a dirty job, but... Amusingly, the other party present at the game, asteroid, was just a couple of posts back in second, with txzona third. Also taking part: snakecharmer, 4 Corners Fan, NASCARbernet, hotclaws, rfffr, shoewizard, Dallas D'Back Fan, PR151, kishi, blue bulldog, SongBird, Clefo and G.O.B.

With the decision on Collmenter, there's really only one question left, at the back of the bullpen. Steve Gilbert Tweets that Takashi Saito tweaked a calf muscle and will be evaluated on Wednesday. If it's decided he won't be ready, that seems to open the door for Mike Zagurski to stick around for a bit. And we're back at Chase Field tomorrow - well, not actually physically there ourselves - for a rematch in the final tune-up against the Brewers in the afternoon.