The long national nightmare is almost over. Exhibition games will soon be a thing of the past, at least for another year, and we can finally get down to the brass tacks of trying to figure out 2012. You already know I'm not much a fan of Spring Training, but here's another reason why I'm down on it: it seems like every statement about the month March has to come with the disclaimer of "it's just Spring Training, it doesn't matter." And I'm not trying to argue the opposite.

As far as the average fan is concerned, Spring Training is just practice to get ready for the marathon of the season. Like Formula 1, the testing means not a lot until you've driven the car in anger. Kevin Towers has put together a team, or a prototype car, if you will, that might work on paper. Or it might be the F2012, and look like dog food. Even in Spring Training things might not work right, but it's hard to put much stock simply because the factors don't match the real competition of the season.

So let's put this to bed, shall we?

If Spring Training doesn't matter, the strawman I just created might ask, then why do we endure it? Beyond the historical and economic reasons that teams still draw upon, there's a distinct exchange between MLB and fans. For the league, teams and players get a chance to pocket a little extra cash and do a little workout, while fans get a more intimate opportunity to watch their favorite players. Originally Spring Training was exclusively in areas that had no team and had no foreseeable chance at a major league franchise. There's a reason why Spring Training exists exclusively in Florida, Arizona, and (historically) the South.

There is real work to be done for teams, but most of it is frankly boring for the fans. Who cares about some no name roster invitee? So what if the fifth guy in the rotation is working on a new pitch that he'll throw just as bad as the others, or that the defense is really focusing on fundamentals? Most of the actual work that goes into playing the game is distance and obtuse to the fan, and it's probably better that way.

Fans generally care about the big picture. What does Spring Training mean for the real thing? Is the team going to be as bad/good as they were in March? The standard response is that it doesn't matter, but there has been some work that suggests that there is a slight correlation between the Spring winning percentage and the regular season.

I decided to run just the Diamondbacks and see how predictive Spring Training could be. Usual disclaimers of small sample size are in effect. I started with just a simple ST win % vs. regular season win %, thinking to myself that there are good reasons to believe it wouldn't be particularly significant, if at all. 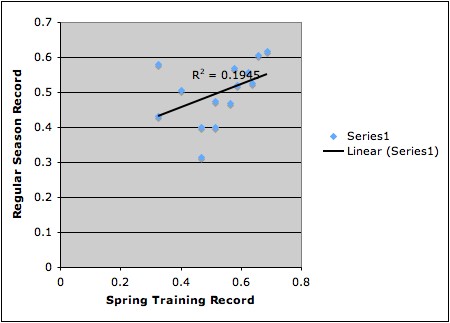 Okay, so a slight correlation but not statistically significant. That's not surprising, given that the roster that performs in March is certainly not the same that performs for the entire season, or even necessarily the majority of the season. So I next looked at whether there was any correlation between just Spring Training and April, the month that should be most similar to ST. 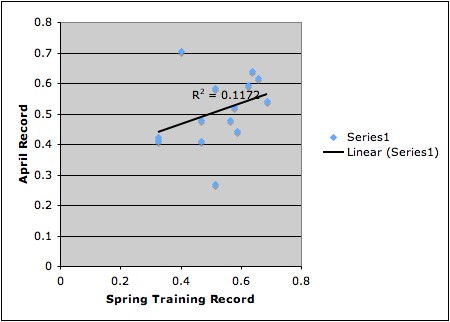 Hm. Slightly less correlation between ST and April records. I'll admit I'm a bit surprised, but perhaps that's because April has a largely static roster, while ST is more similar to a long regular season that should feature a rotating cast as players underperform or are injured. Record can be deceptive, though, so perhaps there's a better relationship between runs scored or runs allowed. Again, it would be logical to assume that April would be more similar to ST than the regular season, especially for pitchers. 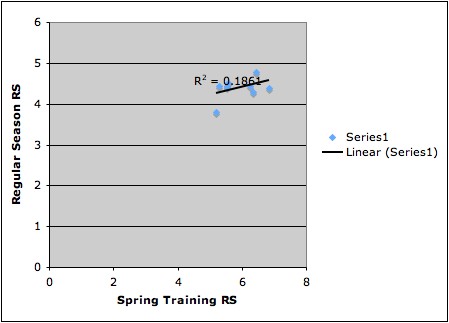 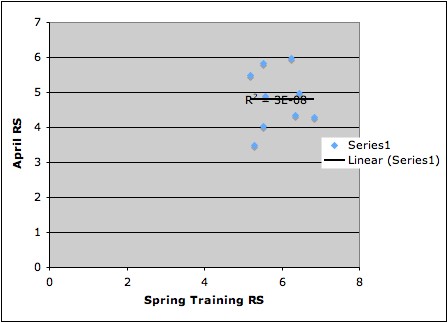 Again, ST is more predictive of the entire season for RS, than for April. In fact, there's virtually no correlation between ST and April for offense. As far as batters are concerned, the two months are just two different months, yet April seems to have some predictive power for the entire season. 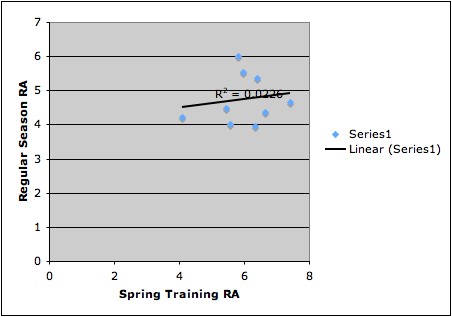 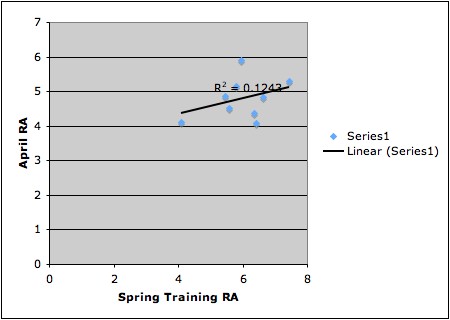 In the reverse of the batters, ST seems to better predict April than the rest of the season. This intuitively makes sense, as pitchers are on strict pitch counts at the beginning of ST, meaning more low level pitchers see time and consequentially give up runs. Also, pitchers need more time to stretch out, as it were, than batters.

Well, let's hope that the correlation is as weak as it seems.

(Of course, last year the D-backs had a particularly poor Spring, and still managed to turn the season around, largely through the play in the second half.)