Early game for most partying people, not for me though as I was up at 5:30 am letting my dog outside. This game started out at a high pace and kind of dragged on after that. There was a lot to like in this start from Miley, he took a no-hitter into the 6th before finally giving up the first hit to John Buck. The offense didn't do a bad job either, scoring 8 times while having 14 hits. Overall, it was a nice day to be a Diamondbacks fan.

With bad memories from yesterday seeming to carry over into today because of a certain shortstop who felt like it was his duty to strike out to start the ball game. After Doomquist, Parra immediately singled to left. Justin Upton continued my fear that Josh Johnson would strike out every single batter when he was called out on strikes. Kubel grounded out to end the inning, stranding the runner, but it wasn't a strikeout at least. Wade Miley followed his counter part by having a 1-2-3 inning with 1 strike out and 2 pop ups.

After a quiet 2nd inning by both sides, the good guys went into the 3rd where they got something going. Aaron Hill lead of by lining out to center, but then Wade Miley came up and helped his own cause by hitting a ball past the third baseman for a single. Doomquist then followed with a bloop single to right, temporarily changing his name to Bloopquist. With runners on the corners and 1 out, Gerardo Parra had a bloop single of his own to left, scoring Miley and moving Bloopquist to second. Justin Upton tried to help, but all he could do was ground into a force out at second. With two outs and runners on the corners, Kubel came up and struck out swinging. The Marlins failed to get anything going again in the bottom of the third, not getting on base yet in the game.

So now we go on to the 4th were Montero lined out and Ransom stuck out before Overbay had a two out double. The Marlins intentionally walked Hill to face the pitcher Miley. Trying to help his own cause, he almost blooped a ball down the left field line for a hit, but it was foul. He ended his at bat with a strike out. Miley continued his perfect ways in the bottom of the fourth, until Random decided he wanted to make an error on a ball hit to him. Miley got out of it though when Logan Morrison poped up to Ransom.

In the top of the 5th inning, Doomquist grounded out to the pitcher, followed by a Parra walk and a Upton single. Kubel came up and decided he should do his part and drive in a run with a single to right. Montero decided he too wanted to contribute with a single to right scoring Upton. Ransom and Overbay followed by striking out swinging. In the Marlins half of the inning, Omar Infante lead off with a walk before Giancarlo Stanton just missed making Miley pay for hanging a change up, hitting one out to the wall in left where Kubel was standing to catch. Gaby Sanchez put a charge into one, but Kubel ranged over to make a good catch. Kubel then threw the ball back into the cutoff man, who threw it to 1st doubling up the runner (who didn't quite give all his effort to get back). Kubel now has 6 outfield assists on the season, making him the new Gerardo Parra...no?

The Diamondbacks offense really exploded in the scoring 5 runs. Aaron Hill lead off with a single and then went to second on a sac bunt by Miley. Bloomquist ended his doom again when he singled up the middle scoring Hill, he also took second on the throw which ended up paying off. Parra grounded out to second, what would have been a inning ending double play turned out to be a runner on third with two outs. Relief picher Mike Dunn intentionally walked Justin Upton to put runners on the corners for Jason Kubel. After starting out 3 and 0, Kubel had the green light and swung at a pitch right down the middle and hit a double off the wall in center scoring both runners. With Kubel on second, and Montero on first after walking, Cody Ransom came up and hit a double into the gap scoring both runners. Lyle Overbay ended off the top of the 6th with a strike out. With Miley having a no-hitter through 5, he came in and gave up a lead off double to John Buck. Buck was stranded at second after the Marlins failed to score.

Hill lead off the 7th with a single, Miley hit into a double play and Doomquist grounded out. The Marlins came up in the bottom of the 7th and put up a fight. Hanley Ramirez lead off with a walk and Logan Morrison hit a ball to Lyle Overbay for what might have been a double play turned out to be no outs when he bobbled the ball. Infante followed with a indirectly productive line out to Doomquist. After catching the line drive, Willie tried to double up the runner at second but threw it away allowing the runners to move up a base. Miley was taken out after 6.1 innings pitched. Stanton followed up by grounding out to Ransom scoring a run. John Buck ended the inning by lining out to second base.

In the top of the 8th, after a Parra walk, Upton line out, Kubel single, Montero ground out and a Ransom strikeout, they failed to score. In the bottom of the 8th, Craig Breslow came in to force 3 fly outs, one a piece for each outfielder.

After an uneventful top of the 9th, the Marlins came up in the bottom of the inning and did some damage. Mike Zagurski replaced Breslow and started off good getting Hanley Ramirez to pop up, but then it kind of fell apart after that. Logan Morrison singled to right, then Omar Infante doubled. Giancarlo Stanton showed off how bad ass his first name is by crushing a home run to dead center. Bryan Shaw replaced Zagurski, getting Donnie Murphy to ground out, he walked John Buck, then getting Austin Kearns to ground out. 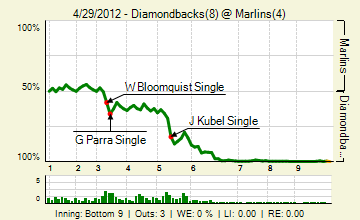 Comment of the day goes to Britback for his thoughts on the Marlins' 515 million dollar stadium.