This is Pit Your Wits, the segment where you try to think of something clever like a doohicky thinks of a thing. Don't try these similes at home, kids.

Intro is brief this week. I need to keep writing academic papers about Robots. After the jump will be last week's winners of the Josh Collmenter Poetry Slam and the standings, as well as this week's challenge!

The Gold Paint Chip goes to SenSurround for this 8 rec'd limerick:

There once was a pitcher named Josh,
Who stomped out all hitters as a frosh,
This year not so much,
The strike zone he can't touch,
As so far with base hits he's awash.

We have a two-way tie for second. First up, ISH95's typo tribute to George Takei and Kasumi Tendo got 5 recs:

Sharing the prize is luckycc with this:

Once upon a day so sunny, for a ticket I paid lots of money
To see a pitcher named Collmenter they called Tomahawk.
From Homer, Michigan, did he hail and all last year he did prevail
But the hits rained down like hail and so rattled he nearly balked.
Out to the mound the manager stalked
Quoth Kirk Gibson, "Take a walk."

Third prize was also shared. This sounds like commie talk, I will have to look into that later. Anyway, we had Nonpartisan with this 4 rec 5-7-5:

Josh Collmenter's hand
Tomahawking overhead
Where will the ball go?

And finally, soco with this tribute to Sylvia Plath:

the maw of ruin
through which he throws
chaffed wheat burning

he
leaves me breathless
under neath this bell jar

while I
stick my head
in an oven

I will mention that jinnah had a post in that thread that had 8 recs, but it was not a poem about Josh Collmenter, per se, and I will risk a cupcake embargo by just giving her an honorable mention. And as far as what that particular post was about, I'll say this:

People can rec things for whatever reason they want. It doesn't really matter in the big picture. This is a silly feature on a sports blog, nothing to get worked up about. Be funny and clever, and the recs will flow.

Now I hope that is the last I have to say about that.

And after Week 2, here are your standings:

This week's challenge is simple. Look at the photo below, and think of a funny caption from it. Scoring is the same as the previous two weeks. Your image is below: 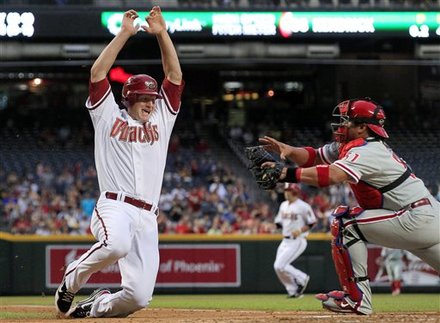 Write your captions below. Entries before 11:59 PM Arizona Time next Wednesday will be accepted.