What do we want? Expanded instant replay! When do we want it? Like, yesterday! Okay, it's perhaps not the catchiest of chants, but the first two games of the series against the Braves have brought home to Arizona fans the need for expanded review of calls made by umpires. And also proven the truth of Washington's statement above - a statement which, incidentally, resulted in the manager being fined a significant amount by MLB. Fortunately, as fans we are not subject to the same restraints, so we can say, without fear of retribution:

Angel Hernandez is an incompetent idiot, unfit to call Little League games. Why is he still employed?

If you missed last night's game, Hernandez's error came at a crucial point. Josh Collmenter had navigated his way to the seventh inning, but put the first two Phillies on bases in a 4-1 game. He was replaced by Bryan Shaw, and a sacrifice bunt moved the runners up. The next hitter delivered a pop-fly to shallow left-field, which brought Jason Kubel running in, to make the sliding grab. Daron Sutton called it a good catch, immediately responding with "He made the play!" Mark Grace agreed, even before seeing a replay, sating, "This looks like a catch." Replays proved them both absolutely right, and instead of two outs, the Phillies had the based loaded and one down.

Now, the following batter rendered the umpire's mistake slightly less important, banging a bases-clearing double down the line to empty the bags, but it doesn't take any imagination to come up with a slightly different scenario in which that error would have had a massive impact on the outcome of the game. And there is absolutely nothing the Diamondbacks could have done about it. They can't even protest the worst umpire miscall like this, because those are only allowed on misinterpretations of rules, rather than judgment calls, however egregious, by the umpires - just ask the Padres, victims of an dubious triple-play, about that.

It wasn't even Hernandez's first, or even worst, blown call of the series. In the first inning of the opening game, Aaron Hill had driven a ball down the left-field line, which clanged off the fence in the corner, bouncing back into play. Hernandez signaled that one a home-run, apparently believing it had hit the foul-pole above the yellow line, and was thus out of here. No, Angel: not even close. 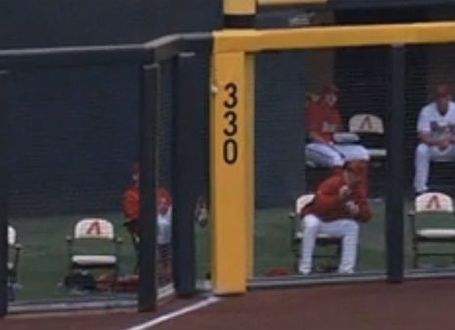 However, Angel Hernandez does think this is a home-run.

The big difference is that the rules allow for home-run calls to be reviewed. So, the umpires left the field briefly, reviewed the video footage - hopefully taking the time to laugh at Hernandez and make some pointed comments about his ocular incompetence - and came back with absolutely the correct decision, which was that it wasn't a home-run at all. The sad thing is, there were plans before the season, to expand replay to cover things exactly like Kubel's catch:

Baseball had sought to increase video reviews this season to include trapped balls, fair-or-foul rulings down the lines and fan interference all over the ballpark. The additional replay required the approval of MLB and the unions representing the umpires and the players.

"We weren't able to come up with an acceptable set of agreements between the three parties," MLB executive vice president for labor relations Rob Manfred told The Associated Press on Tuesday. "We hope we'll be able to do it in time for the 2013 season."

I think there is little doubt who was responsible for dragging their feet concerning this matter: the article goes on, "As part of the negotiations, the umpires would like something in return - maybe additional retirement or disability benefits, or perhaps a seventh umpire for postseason crews so more umps could get a chance in October." The umpire's union, who have been vehemently against any kind of technological improvement which they perceive as taking authority in any way out of their hands. And that's why I have little or no sympathy for the "anyone can have a bad day" argument.

Yes, everyone makes mistakes. But when you actively fight to prevent ways by which the effects of those mistakes can be limited, you then become part of the problem. If you screw up, it's your responsibility, and you should be held accountable. Not that this will happen with Angel Hernandez, who has consistently been voted among the worst umpires in baseball whenever the player's are polled on the matter. He had to split up from long-time partner Joe West last season, MLB finally taking action after criticism of the crew reached unprecedented levels.

Indeed, the pair came in for criticism after a Diamondbacks game against the Padres last year, in which West called a Padres runner out for leaving third-base too early on a sacrifice-fly attempt, even though he was looking into the outfield at the time. Padres reliever Mike Adams said the following day,""You really don't expect anything less out of that crew.. There's a reason (West and Angel Hernandez) were voted two of the top three worst (umpires) in the big leagues." No word on whether he received a slap to the wallet for his comments.

In my work, I wouldn't last very long if I rejected changes that would make things better for the customers. It would also be very nice if customers were fined large sums for Tweeting or making Facebook posts that said bad things about me or my co-workers. I trust the company will be right on implementing that. I firmly believe that technology should be used to the greatest extent possible to reduce the possibility of human error - whether that's Questec, expanded instant replay or a fifth umpire overseeing things from off the field. As far as possible, the game should be decided by the skills of the players, not the foibles of the men in blue.

The bad news is, Hernandez is playing today's game at first-base. If he blows another call there, I'll be running two blocks down from my job and storming the field at Chase.