Share All sharing options for: Diamondbacks 9, Phillies 5: Miley Proves UnderWade-d, And J-Up's Back!

There's a famous British soccer chant, sung when you are thrashing an opponent, which goes, "Can we play you every week?" It would have been thoroughly appropriate for use at Chase tonight, as the Diamondbacks dismantled the reigning NL East champions, until a meltdown in the ninth made the score respectable. Wade Miley, making his first start, was economical, effective and pitched six shutout innings, while the offense beat up on Philadelphia spot starter Kyle Kendrick for a season high nine runs on 16 hits. Better yet, Justin Upton busted out of his season-starting slump, beginning with his first RBI, then adding his first home-run of the campaign. More to follow, we trust.

The Diamondbacks have come out of the gates quickly a lot this season, and they wasted no time doing so tonight, with Gerardo Parra and Aaron Hill doubling to start things off. Hill's shot down the left-field line was initially called as a home-run, but this was overturned on review, the replay showing it was clearly below the yellow line [and, in fact, was a good deal closer to being a foul ball than a home-run]. Still, Hill rendered it moot, by stealing third base, setting up Upton for a sacrifice fly. He delivered, driving in his first run of the year, ending a streak of 14 consecutive regular-season games without an RBI, tied for a career high.

But, wait! There's more! After Miguel Montero was hit, Jason Kubel doubledK him home, Miggy steaming all the way around from first, puffing like a locomotive. A ground-out, Lyle Overbay walk and John McDonald RBI single made it 4-0, and we could have had more, but for Matt Williams confusing Overbay with Usain Bolt, and waving him around third, on a hard-hit ground-ball to right-field by Miley. The ball reached the catcher. Continents formed. Species evolved, flourished and died. Clouds of cosmic dust condensed into stars, giving birth to life, then flickered out into the darkness. And Lyle Overbay eventually arrived at home-plate.

If that had proved decisive, I'd be rather more upset, though Williams did at least learn from his mistake, doing everything short of bodily tackling anyone attempting to score. He didn't need to intervene in the second inning, when Cody Ransom brought tacos to the masses, driving in two more with a bases-loaded double. At that point, the Diamondbacks offense this evening had gone 9-for-13 with a walk and a hit batter, Over the first sixteen games of the season, we had managed a total of 24 hits with runners in scoring position. We had five such knocks in the first five outs of this evening's game.

However, Justin Upton and Jason Kubel opted to bypass the whole concept in the fourth inning, both delivering solo shots into the bleacher. That was a particularly huge relief for Upton, it being his first of the season - thus tying him with John McDonald on the 2012 Diamondbacks roster. But Kubel also had his best night as a Diamondback, picking up three hits totaling eight bases, on a night, where everyone in the line-up had reached base safely by the end of the second inning. McDonald had three hits, with Hill, Upton and Montero having two-hit games and A.J. Pollock getting his first major-league knock.

I had concerns about Miley coming in to this one, as his success thus far had relied on a freakishly high rate of outs from his defense. While that continued to a certain extent, this felt like six much more legitimate shutout innings tonight. Miley struck out a career-high seven, and taking only 81 pitches to chew through 21 batters, allowing two hits and one walk. He retired 14 of the first 15 batters faced, and I feel a lot more confident about his next outing in Miami. Brad Ziegler and Jonathan Albaladejo pitched thereafter, delivering zeroes - though the latter received help from the Kubel Kannon, which gunned down its fourth victim of the year, nailing the runner at home.

With the Diamondbacks 9-0 up after eight innings, you didn't expect to see J.J. Putz warming up in the bullpen. But that's what we ended up seeing, largely due to Kirk Gibson's rank mismanagement of Joe Paterson. You know Paterson; our lefty specialist, who was nails last year, retiring tough left-handed batters? Witness this sequence of batters against which Gibson used our LOOGY:

Craig Breslow came in, allowed a lead-off infield hit, but the defense cleaned it up with a nicely-turned double-play, and real disaster was averted. Except as far as Paterson is concerned. Paterson's ERA is now 37.12, and it was clear tonight that he has no confidence at all against anyone. Oh, and I'm not sure who we're going to use for long relief tomorrow if Collmenter struggles, because somehow, despite having a nine-run lead, the Diamondbacks ended up using everyone but Hernandez, Putz and Shaw. 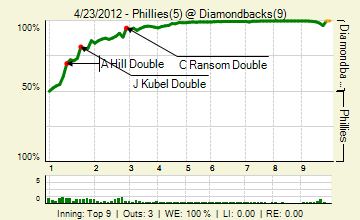 Some good comments - honorable mention to CaptainCanuck and luckycc, but we go with this double-handed snark from Dan:

A phenomenal hitter of Triple-A pitching. Lucky for us, that’s basically Kyle Kendrick.

We reconvene tomorrow night for a contest between the same two teams, in a strange new land where the Coyotes are actually in the second round of the playoffs. Who knew?