Share All sharing options for: Diamondbacks Thing of the Week: Schedule Watch 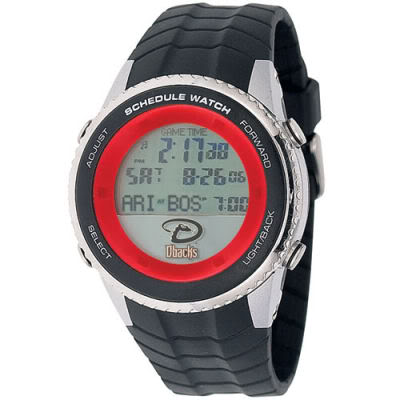 Do people still wear watches? I'm not sure. I know I certainly don't. It seems superfluous to strap a device to your wrist, simply for the purpose of advising you of the time, when the same information is available from a multitude of sources, just about everywhere I am, e.g. from the computer, cable box or, most obviously, my cellphone. I suspect watches are gradually going the way of all those other separate devices which are now integrated into your phone. Why bother with a separate GPS, camera or MP3 player, when something else you carry around with you can do the task adequately?

But for now, here's one of the 152 results found on Ebay for "Diamondbacls watch." And this is not just any watch. No: this one will tell you when the Diamondbacks are playing...

Arizona Diamondbacks fans will love this Game Schedule watch by GameTime. The Game Time Schedule Watch may be the coolest sports watch ever made. Pre-programmed with your favorite team or school's schedule NASCAR version has the Sprint Cup schedule. Song plays at the start of each event. "Star Spangled Banner" (or "O Canada" for Canadian teams). MLB games play "Take Me Out To The Ball Game." College versions play the school fight song.

$99.95 plus shipping. There's just so much deliciously wrong with this, right from the very concept. Who came with the idea? What is the target audience for this? Rabid sports fans with selective amnesia? Those who can't miss a game, but don't quite want to take the Memento approach of tattooing the schedule on their arm? [Rainouts are a bitch, I imagine] It seems particularly unnecessary for baseball fans, given the length of the season. I mean, I'm about as hardcore as they come, but if, for example, I forget there's a day game, my reaction is more "Oh, well, there's 161 other ones," rather than "Oh, no! If only I had a watch to remind me of the start time of every contest!"

And it's not even a subtle reminder, like a beep or a gentle vibration on the wrist. No, it's an entire song, no doubt rendered with all the loving care to detail only obtainable from retro 80's technology. My first thought was, is there a way to stop it from playing? I mean, there will surely be some times in even the most devoted fan's life, when they do not want to be reminded of game time. There you are, lowering your beloved Uncle Bob into the ground, as his wife weeps hysterically over the coffin, and all of a sudden the mourners are being exhorted to "buy me some peanuts and Crackerjack," because "i don't care if I never get back."

It also strikes me that we MLB devotees get rather hard done-by, in comparison to the NASCAR folks. Both do get the schedule and an appropriate song. But compare and contrast the other features

One feels there should be comparable features on the Diamondbacks' watch. Maybe a button which displays a countdown of the days and hours until we no longer are paying Bernard Gilkey, accompanied by a quick burst of We're In The Money... That would make it much more of an actual Diamondbacks watch, rather than it really is at the moment, a regular watch with a teeny team logo stuck on it. It does have a USB connection. Perhaps some enterprising hacker could get in there and carry out some custom modification. If I worked there, I'd add an "easter egg" to the Yankees version that replays the bottom of the ninth inning from Game 7, every year on November 4.