Your Acromioclavicular Ligament And You (and Chris Young)

Share All sharing options for: Your Acromioclavicular Ligament And You (and Chris Young)

I imagine most Diamondbacks fans probably felt like someone had walked over their grave when they heard that Chris Young had a slight tear of the AC ligament in his right shoulder, a result of the brutal collision with the outfield wall in left-center during Tuesday night's game at Chase against the Pirates. "Torn" and "ligament" was probably about the only part of the sentence that made much sense, and those are never two words one likes to hear with regard to your team's players, especially when they have started the season at such an incandescently-hot pace.

But before we panic, let's learn a bit more about what happened to Young.

The first thing to stress is that this AC ligament is completely separate from its more well-known colleague, the ACL. The latter stands for anterior cruciate ligamemt, which is one of the main components of the knee, and is often "blown out" by athletes, particularly in the NFL. Wrong limb. With that out of the way, Kevin Towers had this to say about the injury:

"It's a deep AC joint contusion, but there's a small, small little tear in the ligament there. If you ask CY, he'd probably want to come back tomorrow, but the doctors told us to take a couple of weeks off, so he doesn't do any more damage to it. Hopefully, we'll get him back in the next 2-3 weeks."

For those of us whose medical knowledge is limited to watching Grey's Anatomy, a quick explanation may help:

The shoulder is made up of three bones: the scapula (shoulder blade), the humerus (upper arm bone), and the clavicle (collarbone). The part of the scapula that makes up the top of the shoulder is called the acromion. The AC joint is where the acromion and the clavicle meet. Ligaments hold these two bones together... The AC ligaments surround and support the AC joint. Together, they form the joint capsule. The joint capsule is a watertight sac that encloses the joint and the fluids that bathe the joint.

While the shoulder is certainly a joint which can cause problems - it appears to have ended Brandon Webb's career, for example - this particular injury was not the result of stresses which came directly through playing baseball. The general opinion appears to be along the lines that, "Most shoulder contusions will heal in a couple weeks with only supportive care." The pain should resolve itself within about seven days, with nothing required more than rest, cold compresses and perhaps some anti-inflammatories like Ibuprofen. 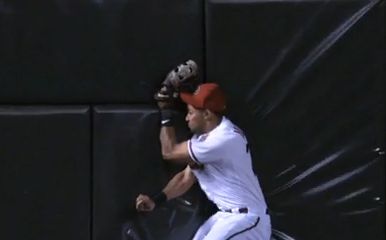 Slightly more concerning is the news that Young has a slightly-torn ligament. In milder cases, the ligaments would simply stretch during the collision or accident responsible for the injury - this is known as a Grade I injury. A partial tear moves things into Grade II, and if the ligament is completely torn, this is known as a Grade III, and surgery to repair the damage may be needed. There's no indication this seems to be the case with our center-fielder, but it's quite hard to evaluate the prognosis in this case, because it's not an injury commonly suffered by baseball players. Bike accidents, contact sports and car accidents are more common causes.

It also limits things because we don't know the exact extent of the injury: for some reason, the Diamondbacks have not seen fit to release the full MRI scan online, in a convenient PDF format. Sheesh. But there are actually four ligaments surrounding the joint: as well as the two AC ligaments, another pair, the coracoclavicular ligaments, help to hold the collar-bone down. Was only one of those affected? Certainly, from what Towers says, it does appear to be on the minor end of the Grade II spectrum, and it's quite possible that the damage might not have been noticed without this morning's MRI.

All told, I'm fairly optimistic that this will be a relatively minor issue. It's the first time Young has had to go on the DL since reaching the majors in 2006, and his loss is certainly a blow to the team, especially combined with the current questionable status of Justin Upton, who remains day-to-day with his thumb injury. But, as Towers points out, it's far better to lose Young for a couple of weeks now, than risk aggravating the injury and end up with him missing months or longer.