Coming into today's contest, the D-backs hadn't lost a series to the Pirates at home since 2005, and was hoping to keep the streak alive by taking the rubber match of this three-game set. Daniel Hudson was on the mound against Pirates starter James McDonald, but the D-backs lineup was missing both Chris Young and Justin Upton with injuries, so the rest of the bats in the D-backs lineup had their work cut out for them. Could Arizona's patchwork lineup keep their streak alive? The short answer: No. The long answer: After the break.

Hudson got off to a rocky start in the first, as he was unable to put away lead-off hitter Alex Presley, walking Presley on eight pitches. Presley stole second and Clint Barmes' ground ball to to the right side of the infield moved him to third, bringing Andrew McCutchen to the plate with one out and a runner on third. Hudson pitched around McCutchen, walking him on five pitches (McCutchen fouled off a ball inside and out of the zone), instead choosing to deal with Neil Walker. Walker put together a good plate appearance of his own, but wound up grounding the ball right up the middle as McCutchen was running, meaning that Willie Bloomquist was already on the bag and ready to receive the grounder, getting the force out and quickly throwing over to first for the big inning-ending double play.

Out of the jam, Arizona took little time to strike back, with Bloomquist leading off the bottom of the first against McDonald with a triple to deep right-center. After Aaron Hill hit a soft bloop line drive to second, failing to score Bloomquist, Jason Kubel delivered in the three-spot and shot a line drive to center field, plating Bloomquist and putting Arizona up 1-0. After Miguel Montero walked, though, Ryan Roberts and Lyle Overbay each flied out to end the inning with Kubel stranded at first.

Hudson began cruising at this point, and while he wasn't missing a ton of bats, he was working efficiently and generating plenty of contact on the ground, with two easy double plays ending Pirates rallies. Hudson also was able to work around a pair of errors in the top of the fifth inning, keeping the score locked down at 1-0. McDonald's early inefficiency knocked him out of the game after just four innings, but reliever Brad Lincoln - just called up from Triple-A - picked up where McDonald left off in stifling the D-backs' lineup.

Little else happened through the end of the sixth inning, in fact. There were occasional threats, such as those ended by Hudson's double plays and a lead-off triple from Aaron Hill in the sixth, but the game held steady at 1-0 through six, with Hudson squeezing out of jams and Lincoln plowing through the D-backs lineup. The next action came in the top of the seventh, when Hudson gave up a solo home run to Pedro Alvarez - hitting below .100 on the year - on a 2-0 changeup right over the heart of the plate. Hudson had walked Alvarez on five pitches in their battle prior to the home run PA, peculiar for someone who has struggled as much at the plate this year as Alvarez has.

The next scoring came in the top of the eighth, although Hudson certainly started the inning well. After inducing a fly-out from Josh Harrison and a swinging strikeout from Alex Presley, Hudson gave up back-to-back singles to Clint Barmes and Andrew McCutchen, ending Hudson's day. David Hernandez came on to try to strand the runners, but a cheap high pop in shallow right field managed to drop in for a single, and Barmes scored from second on the play. Casey McGehee popped out in foul territory to stop the damage, but the D-backs were down 2-1.

As it turned out, that was the deciding run of the game. Arizona had baserunners in both the eighth and the ninth in Aaron Hill and Miguel Montero (pinch-run for with Justin Upton), but a double play from Jason Kubel - the offense hero of the game prior to this at-bat - in the eighth and consecutive outs from Lyle Overbay and A.J. Pollock - making his MLB debut - in the ninth sealed the game for Pittsburgh. Arizona ends their three-game set with the Pirates with a 1-2 record, and now play four games at home against the Braves, trying to salvage their homestand. 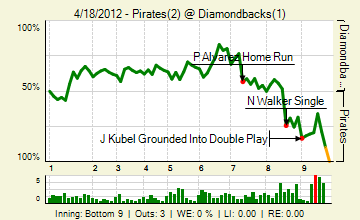 Dan didn't bother to pick a Comment of the Game [actually, he didn't bother with a Fangraph or box-score either...] I'm thus exercising executive authority and awarding it to Clefo. We can only hope he's right:

CY has been whisked away to Area 51 for more testing. When he comes back he will be a CY-Alpha Centaurian hybrid capable of eating your soul with his eyes AND hitting for more power

Founder of the 'Foundation for the Advancement of Clefoing' a 501C3