So, the plan was to pop out to the curry house with Mrs. SnakePit, enjoy a quick chicken tikka masala and a keema naan, then head back to watch this one. But barely had we arrived, when we get a call from the SnakePitette: "So, what time are we meeting there?" Er, now? Because you didn't reply to the email? Well, to cut a long story short, our quick CTM + KN, turned into a very pleasant family dinner with the SnakePitette, her boyfriend, his mother, Mrs. SnakePit's sister and a cameo from SnakePit Jr. In the interests of full disclosure, therefore: all I know about the first six innings, I learned from surreptitious peeks at my phone.

But, quick summary. Joe Saunders settled down after a shaky first, and the D-backs largely opted to bypass hitting with runners in scoring position, in favor of long balls from Aaron Hill, Chris Young and Gerardo Parra.

The team has now gone two complete cycles through the rotation. Following up on a question posed in the Gameday Thread, "Who had Saunders as having the best ERA of our starters?" For he followed up seven shutout innings with seven more solid frames tonight, allowing one run on six hits and two walks, striking out five Pirates. That's an ERA of 0.64. Now, admittedly, that won't last, and the Padres and Pirates don't exactly represent the toughest opposition you'll find in the majors. However, Saunders has done exactly what you'd expect from a pitcher facing such inoffensive offenses, all but shutting them down.

It didn't look like that was going to happen in the opening inning, when Joe had no trouble getting the first two outs, but then took five attempts to finish off the frame, with a stolen base (featuring a misfire of the Miggyzooka) and wild pitch thrown into the mix. Pittsburgh got onto the board first, and stranded three runners, when Saunders coaxed a fly-ball to Justin Upton with the bases loaded. It was his 24th pitch of the inning, and the scurvy swabs of HMS SnakePit were rattling their cutlasses and preparing to keelhaul Saunders with a bottle of grog and... something involving a parrot. Look, let's take the piratical references as read for the rest of the recap, shall we?

It was a different Saunders the rest of the way, I'm delighted to report. Only one Pirate got past first-base once we had escaped the first inning, when former D-back Rod Barajas doubled with two outs in the sixth. Otherwise, Saunders was particularly aggressive early in the innings, and was helped by his defense making the plays behind him. Even Montero redeemed himself, gunning a base-runner down after a lead-off single in the fifth caused some nervousness, with Arizona's lead at that point being only one run. Joe left, having thrown 102 pitches, and delivered another outing that was everything we could have wanted.

Meanwhile, the offense came right back, Aaron Hill clubbing his third home-run of the year in the bottom of the first to tie things up. There was reportedly a sighting of that rare beast known as "a D-backs hit with a runner in scoring position" in the fourth, Ryan Roberts making Pittsburgh pay for a pair of two-out walks and driving in Paul Goldschmidt [something Dread Pirate something]. However, Jason Kubel unwisely opted to advance to third on the play, and I don't have to tell you what that meant in terms of subsequent offense for that inning.

Then, in the sixth, Chris Young happened. Better yet, Chris Young happened immediately after Montero singled, giving him five HR and 13 RBI for the year - the latter is as many as the second- and third-placed Arizona batters have driven in combined this year. He also added a couple of singles, giving him a line for the season to date of .405/.500/.892. It's especially fortunate, while Upton continues to struggle: he was 0-for-4 this evening, and has still yet to homer or drive in a run for the Diamondbacks this season. While I'm not exactly concerned as yet, I'm concerned that I should be concerned, if you see what I mean.

Other good stuff this evening. Aaron Hill had a hit and a walk, Jason Kubel drew a couple of free passes, and Geoff Blum finally managed to end his ohfer the season, getting a pinch-hit single to center in the eighth. Speaking of pinch-hits, Gerardo Parra completed the Diamondbacks scoring in the seventh, with a solo home-run into the pool area at Chase. That was his first long-ball off the bench, a role which has not been kind to him in the past, with a career line as a PH of .136/.188/.159 in 48 games. David Hernandez and Brad Ziegler closed things out, with a walk by the latter the only Pirate to reach base. 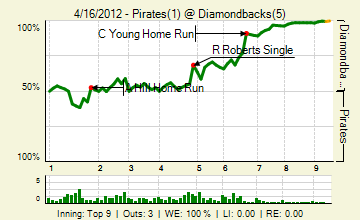 A trio of green comments, the most popular of which I do not understand at all, so is automatically disqualified. In fact, I'm going to ignore all of them, though one was brought to us by DivineWolfwood, who is winner of this evening's Premature Ejaculation award.

Is it too early for me to be upset we re-signed Saundo?

I trust we all know the answer to that one. :) A good evening for Arizona, aided by San Francisco and Colorado both losing [I don't care about my fantasy team, if that's what it takes to make Lincecum receive the L every five days]. We reconvene tomorrow evening at Chase when the same two teams face each other, hopefully with a similar result. Consecutive wins by more than two runs? I could get used to this kind of thing.