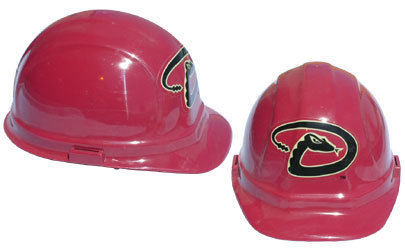 I was tempted to go with the 2006 rare minors EVAN LONGORIA ROOKIE RC CARD DIAMONDBACKS HOT~!~ trading card: I imagine a genuine Evan Longoria Diamondbacks trading card would actually be worth something, since he had never been involved with the organization on any level. Sadly, this appears to be a simple listing error. The same goes for the CHAD TRAVEY DIAMONDBACKS SIGNED BASEBALL. So, instead, let's go for something functional yet elegant, which goes to prove that, yes, MLB will pretty much whore themselves out for any purpose or product you care to suggest.

Safety directors will appreciate how MLB hard hats caps can complement a safety program.
With workers more inclined to wear them, the new line of MLB hardhats can actually improve wearer acceptance.
Show your favorite Major League team with pride...

I will admit, my first thought when I saw these, was that this was simply some kind of kids' giveaway, on Bob the Builder day at the ballpark: "Can we fix the bullpen? Yes, we can!" However, there's nothing about these hats that apparently make them a plaything. Given previous incidents, perhaps we should get Justin Upton one? Though I think, we should probably carry out some tests on these hats first, Something involving Baxter and a piledriver should prove suitable - y'know, purely to ensure they come up to the necessary requirements.

Yes, they do have specifications for such things, which is what "ANSI Z89.1 2003, Type 1 Class E & G Standards" means. ANSI Z89.1 is the name of the overall document which lays out the requirements. Type 1 means that the hat is "intended to reduce the force of impact resulting for a blow only to the top of the head," rather than off-center. Class E & G refers to the degree of electric shock protection provided by the headgear. Class E hard hats are "intended to reduce the danger of exposure to high voltage conductors. Test samples are proof-tested at 20,000 volts (phase to ground)."

That's some serious voltage, so these would appear to allow you to show your Diamondbacks pride when playing in the local sub-station. However, "this voltage is not intended as an indication of the voltage at which the helmet protects the wearer." I was under the impression that it wasn't really the voltage that was lethal anyway, it was more to do with the amperage - I think we need to defer to 'Skins on this, whom I seem to recall is a professional in this area. But, really, I would tend to imagine most people realize that a hard hat is more about preventing bumps on the noggin than short-circuiting your frontal lobes.

Interestingly, it does not appear that there are currently any more than token standards which MLB helmets are required to meet - as long as it has an earflap, its good. In August 2009, David Halstead, technical director for the National Operating Committee on Standards for Athletic Equipment, said that, "Major league players do not play with a helmet that meets any standards. It's remarkable to me. Once the earflap is removed, it can't be certified." While rule 1.16 does require players - and since 2008, coaches - to wear helmets at all time, it says nothing about what protection it needs to offer.

But that will be changing, with a new helmet mandatory for next season, which can withstand the impact of a 100 mph fastball. This was added in the new, 5-year collective bargaining agreement signed last November by Major League Baseball and the Players Association - it's in the "Health and Safety" category (Section VIII) of the labor agreement. Earlier attempts to get players to wear them failed, largely on the look and feel proving unacceptable: For instance, Frenchie was particularly unimpressed in 2009, snorting derisively, "No, I am absolutely not wearing that... It’s brutal. We’re going to look like a bunch of clowns out there."

Of course, while required for batters and coaches, the first- and third-base umpires won't need to wear them, which seems a little odd. And, certainly, far more vulnerable than either is the pitcher, as the Rockies' hurler we saw on Friday night, Juan Nicasio, will tell you. It was a fatal injury to another Colorado employee, coach Mike Coolbaugh, that led to MLB requiring helmets for coaches. One wonders what it will take before they mandate at least some kind of protection for those on the mound. Apparently, a broken neck isn't sufficient.