Share All sharing options for: Diamondbacks 5, Rockies 6: Fun In The Sun (And No Bees!)

If you are reading this, expecting an in-depth detail scouting report on yesterday's game, you're probably going to leave disappointed. Because, while we were actually there, and the game wasn't broadcast.. As the pic above illustrates, we were sitting abour 450 feet away from home-plate and, to be honest, the social aspects were a bit more vigorously exercised than the analytical skills. However, if you want to know who was there, who we saw, what snacks were consumed, and which Rockies were vigorously heckled... That, I think we can deliver.

Most importantly, however, we are pleased to report that that the number of days Salt River Fields has been bee-swarm incident free is now one. The Rockies, however, were taking no chances in this matter, sending bench coach Tom Runnels out to home-plate to deliver the line-up in a beekeeper's mask. Ah, spring training...

I think we were about the last to show up, with the kishis already present along with soco - mrssoco and 'charmer were off soliciting autographs, with a great deal of success. While Marc unfortunately had to pull out due to illness, there were a couple of guest stars: 'charmer bumped into 'hacks, while I chatted with mrs simons for a bit. The attendance wasn't that huge overall, at 7,758: personally, we're happy with that, since it meant plenty of space on the outfield grass, and no real traffic issues in or out. Worth noting that's more than comparable - about 10% up, in fact - on the crowd for the first Monday game last season, when Arizona also played Colorado, with the crowd there 7,025. 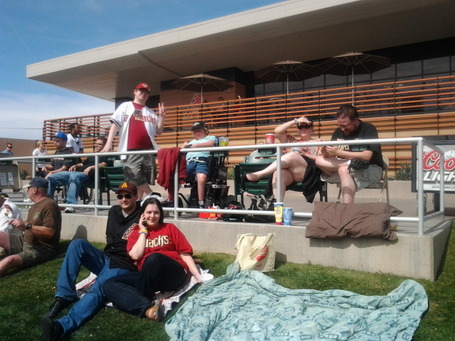 We were disappointed by the lack of Troy Tulowitzki in the Rockies line-up: allegedly "a scratch with a minor illness," we all know the real reason is that Tulo Fears The 'Pit, having seen our verbal brutalization of certain Rockies in the past (Ryan Spilborghs has never really recovered...). Fortunately, the baseball gods delivered us a gift of unusual size in Colorado DH, Jason Giambi: no prizes for guessing which direction we took in regard to him. Like most of the regulars, he was pulled from the game early - one imagines they wanted to be sure his sample got to FedEx before it closed. [Oh, and we play Milwaukee four times this spring: March 21/28, plus two warm-ups at Chase...]

From our side, we got to take in Gerardo Parra's first start of the year in CF. Do you think he has something he wants to prove? He hustled out a double to lead off the game, followed that up with a home-run (which we initially thought was another double!), took a free pass and then made a good diving catch in right-center. If this is any indication - and admittedly, a single spring-training game is about as meaningless a sample as they come - then Jason Kubel will have a fight on his hands for playing-time. Which is probably the exact intention all along. "I think it's just stay comfortable, play happy and stay concentrated on the field," he recently said. 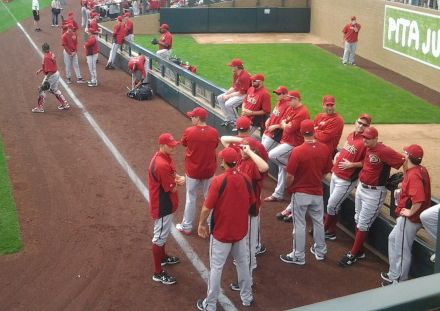 What's the collective term for a group of Diamondbacks?

While the sun battled clouds most of the afternoon, it remained warm enough to require frequent trips for beverages. If you're going to SRF, bring your own water - about the only consumable you are allowed to bring in, a stark contrast to the relaxed policy at Chase Field - since it will be pretty expensive otherwise, at up to six dollars for a bottle. Put it this way, I think it's the first time I've ever heard anyone selling water apologize for the price. Also unlike Chase, there are no free-market entrepreneurs set up outside, selling the product at discounted rates. Imagine the tribe clamps down on that, almost as much as if someone were to set up a row of slot-machines....

To be perfectly honest, I think we were largely happy to see the game come to a sudden end, one pitch into the bottom of the ninth inning. We don't leave before the finish, of course - that's a tenet of 'Pit philosophy - but when you've seen the bulk of the players you know, not just leave the game but apparently leave the park entirely [a gaggle/swarm/whatever of D-backs appeared to exit the stadium down the right-field line in about the seventh inning], then it's difficult to retain true enthusiasm, especially when you're all sticky and sweaty. Why they didn't build SRF with a retractable roof, I'll never know...

Still, many thanks to those who came out or stopped by, for the first gathering of the year - there'll be an encore performance on the 24th, for the game against the Kansas City Frenchies. And...baseball! Good to have you back. We missed you.