Glad I wasn't at Salt River Fields this afternoon, on a number of levels. Most obviously, because the field came under attack by a swarm of bees, resulting in a lengthy delay to this afternoon's game against the Giants. Do Not Like. It seemed to un-nerve the Diamondbacks pitchers a good deal more than the Giants hitters, with the former doing their best Nicolas Cage impression, and San Francisco ending Arizona's six-game winning streak against them, pounding out 21 hits. That's a whole month's worth for their offense.

Both teams wasted one-out doubles in the first, but the top of the second came to an untimely halt with two on and one out for Ian Kennedy. It seemed from the radio that the incursion began in right-center, with Chris Young + Adam Eaton the first to incur the wrath of the swarm. They weren't even passing through: it seems there was something in a camera well near the infield which was attracting them, and despite the best efforts of staff and even local firemen, the game was delayed for 41 minutes: CY and Adam Eaton signed autographs while waiting. It's actually not a first for Arizona in spring training: back in 2005, a game against the Rockies was similarly held-up in Tucson. 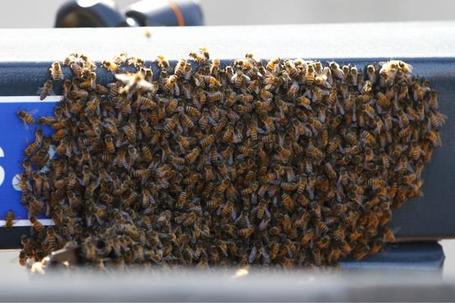 This marked the end of Kennedy's outing, but he was close to having got his work in anyway, having thrown 29 pitches with a scheduled limit of 35. He told KTAR, "It was pretty weird... First time I've ever seen that, hopefully the last!" He was replaced by Barry Enright, who immediately struggled, allowing an RBI single and getting a fortunate out to end the inning, when a batted ball his a Giants' base-runner. Things didn't get much better for Barry in the third, as the first six hitters all reached against him, on five hits and a walk, though he wasn't helped by Gerardo Parra apparently losing a fly-ball in the sun. Still, seven hits and four earned runs over 1.2 innings isn't a great line.

Things didn't improve for our pitchers. Joe Martinez was asked to pitch two, due to the shortened appearances by Kennedy and Enright, and allowed six more hits and three runs in his afternoon of work. The Giants scored every inning from the second through the seventh inclusive, with Takashi Saito being tagged for two unearned runs in his Diamondbacks debut (SS Chris Owings making his second of two errors on the afternoon), and another run scoring off David Hernadez in the seventh. Craig Breslow finally stopped the bleeding arterial spurting worthy of a samurai movie, with a 1-2-3 eighth, and Brad Ziegler left them loaded but scoreless in the ninth.

Meanwhile, the offense had an afternoon largely to forget, being held entirely scoreless until an Eaton ground-out scored Marc Krauss for the second out in the seventh inning. The Diamondbacks managed a mere seven hits, with Aaron Hill's double in our second at-bat of the afternoon, the only extra-base knock. The Gameday Thread died in the second half, but imstillhungry95 and NASCARbernet provided the majority of comments, as yesterday, with txzona in third. Also present: Dan Strittmatter, blue bulldog, Clefo, TylerO, hotclaws, soco, Jim McLennan, iheartdbacks, diamondfacts, dbacksfann, G.O.B., asteroid, DeDxDbacKxJroK, 4 Corners Fan, dbacks25 and Muu

All told, despite another record crowd of 12,546 - narrowly beating the mark set yesterday [I guess they crammed a few more in on the lawn!] - it was a game from which Arizona fans would rather move on . "These are the ones you just hope you get out of healthy," said Kevin Towers on the radio, and with the position players mostly out of the game by the end of the fifth inning, we should be ok there. Hopefully, things will go better tomorrow, with Daniel Hudson getting the start, since there will be a number of SnakePitters in attendance. Anyone know if they sell beekeeper's masks in Sedona Red?