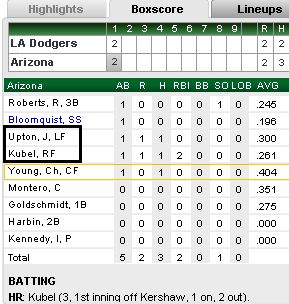 Gameday gets its April Fool on early...

So... I guess we win the day by an overall margin of 13-12, right? Oddly, it was the B-team, containing not one player you''d be certain of seeing in the Opening Day line-up, and with Chris Jakubauskas starting, who proved victorious over the Royals in Surprise. The A-lineup, with Opening Day pitcher Ian Kennedy, crashed and burned 9-3 to the Dodgers at Salt River Fields. Though, to be fair, it was less Kennedy's loss than the bullpen, who allowed six runs in their four innings of work.

We begin the afternoon at Surprise, however, since that was far more fun to talk about, the Diamondbacks plundering 14 hits against the Royals. They blew the game open with a four-run fifth that has me wondering if this inning was another one of Gameday's little pranks, as it included a two-run homer to Geoff Blum, and even more remarkable, a two-run triple to... Henry Blanco? Our catcher, who has exactly one major-league triple since 2006? Apparently so. There was another four-spot for Arizona a couple of frames later, the runs scoring courtesy of a John McDonald single and Adam Eaton triple.

Lyle Overbay led the charge for the Arizona hitters this afternoon with three hits, while there were two apiece for MoDonald, Eaton and A.J. Pollock. Blum and Cody Ransom each reached base twice, on a hit and a walk. Jakubauskas was solid, working five innings and allowing a run on six hits and two walks, though with only one strikeout. Bryan Shaw and Joe Paterson got in on the action with clean innings, though a rare J.J. Putz sighting didn't work out too well, with three singles leading to a run. Bo Schultz allowed a run in the eighth: if you didn't even know we'd signed him, you're not the only one. Apparently he touched 95 mph on his tryout.

Less pleasing were the results at Salt River Fields, where our pitchers were the ones surrendering the 14 hits. Craig Breslow's efforts to pitch himself off the Opening Day roster continued with a three-run sixth inning, where five of the first six Dodgers he faced reached base, on four hits and a walk. The outing raised his spring ERA to 10.80, with 14 hits and four walks in 8.1 innings. Brad Ziegler wasn't a lot better in the seventh, the Dodgers touching him for three hits, though he did generate a double-play ball to escape with only one run allowed. Keith Hessler allowed two runs in his inning, but with all respect to Mr. Hessler, I don't think we're too concerned about that.

It was something of a surprise to see Kennedy starting this afternoon, especially against a divisional rival this late in spring training. Mind you, the same could be said about Clayton Kershaw, who started for the Dodgers. Maybe the two sides decided that it didn't matter, since they won't be seeing each other "for real" until the middle of May. Kershaw didn't seem to last very long, being pulled before getting through the fourth inning, and looked some way short of ace-like, allowing six hits and a walk in 3.2 innings, leading to three runs.

Jason Kubel seemed to enjoy what was likely his first encounter with Kershaw, homering in the first, a two-run shot, and adding a double in the fourth. Given the woeful record of most Arizona batters against him in the regular season, e.g. Justin Upton 0-for-18 with seven strikeouts (though he did single this afternoon), we hope for more of that. Upton added a walk, and there were two more hits for Chris Young, bringing his spring average back up to exactly .400. Miguel Montero reached base three times, on a hit and two walks.

Almost 300 comments in the Gameday Thread, as we bounced back and forth between the two contests. However, it was fairly light in terms of participants. hotclaws led commenters, ahead of NASCARbernet and jjwaltrip. Also to be seen: Counsellmember, Jim McLennan, asteroid, Clefo, Muu, txzona, CaptainCanuck and rfffr. The calendar turns to April tomorrow, but it's more of the same, with the team heading over to the West side of town, to take on the Dodgers at Camelback Ranch. It'll be Daniel Hudson versus Chad Billingsley for that one.