Share All sharing options for: Diamondbacks 3, Padres 4: Believe It Or Not... 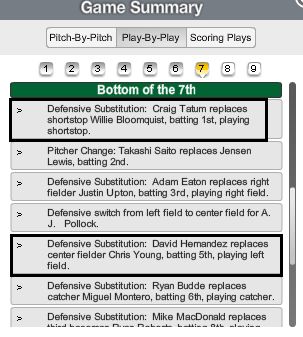 The above, apparently depicting our third-string catcher playing shortstop, and our set-up man roaming the outfield, is why I am not really prepared to vouch for the authenticity of anything that happened this afternoon in Peoria. "Don't believe his lies," to quote Memento. I am not even sure the five double-plays which the Diamondbacks reportedly hit into this afternoon actually took place, or are merely some cruel joke perpetuated by whoever was in charge. I mean, they even claimed the Padres had a prospect called - get this - Beamer Weens. Now, that's just going too far. So, with disclaimers taken as read...

Josh Collmenter started for Arizona, and seemed to do a little better than in previous outings. Though given his ERA coming in was a crisp 14.14, it wouldn't have taken much to get that going in the right direction. That number ended the day in single digits, after five innings of two-run ball from Collmenter, with five hits allowed, though his K:BB ratio was an unimpressive 2:2. He did retire seven batters in a row at one point, with clean innings in the third and fourth, before consecutive doubles to open the fifth, and plate the Padres' second-run. He worked out of further damage, and it good to see him appear to get things together, at least somewhat.

Jensen Lewis pitched the sixth and kept a lead-off hit from scoring, which preserved his spring ERA at 0.00. While it seems likely he'll start the season in Reno, since he signed a minor-league contract, three hits and no walks in six scoreless innings will have been noted. In the event we need an arm in relief, he'll be on the list for consideration. A fairly rare Takashi Saito sighting followed - he'd only pitched in one contest since March 16, part of an apparent plan to avoid overtaxing his fragile arm in spring training. A hit batter and first-pitch home-run later... Yeah. Wade Miley pitched a scoreless eighth.

On offense... We kept getting runners on-base, and them wiping them out, at one point hitting into double plays during four consecutive innings, from the fourth through the fifth. Two were by Paul Goldschmidt, with one each by Aaron Hill and Jason Kubel, with Miguel Montero's completing the day's quinfecta of suck in the seventh. I really hope we are just getting it all out of our system before the regular season. We finally avoid this fate in the sixth, with an Aaron Hill sacrifice fly, and made it interesting in the ninth by scoring two runs, and had the tying run in scoring position with one out, but couldn't bring it home.

That's the theory, anyway. Justin Upton and Montero each got a pair of hits... But then, so allegedly did David Hernandez, singling on a ground-ball to the aforementioned Mr. Weems. As David sardonically Tweeted,

"@CbakeSwag: ummm @DHern_30 ??? twitter.com/CbakeSwag/stat…" kind of hard to be in the outfield when I'm sitting at home.

Gameday eventually corrected itself, replacing Hernandez with Chris Ellison, but that was rather too late for the sarcasm to drip from our lips. Somehow, I ended up leading the Gameday Thread, though most of that was probably yelling at the newcomers for posting references to certain aquatic creatures. jjwaltrip was second, and hotclaws third, with the following also present: txzona, CaptainCanuck, LiamNeeson, snakecharmer, Clefo, NASCARbernet, rfffr, SongBird, and an honorary mention to Dan Strittmatter for appearing solely in one of the hidden threads. We discussed German pronounciation and learned about the US invasion of a small part of Britain.

Ian Kennedy gets the start for Arizona tomorrow, as we face the Cubs back at Salt River Fields, with a 1:10pm first pitch. Hopefully there'll be none of the following going on, which seems to be a recurring issue there...

#Rockies vs. @Reds may be be delayed by a swarm of bees behind home plate #SpringTraining #MLB #LosRockies