Baseball isn't a game I love purely for the sport, wonderful though it is. It's perhaps the most social of sports, with a pace that lends itself to talk in the stands, and there are times when this provides the real entertainment, and makes the experience what it is. Take last night. It was a meaningless spring training contest, that will likely be all but forgotten in the greater scheme of things, before many weeks have past. But personally, it was one of the most enjoyable games I've ever attended: I don't recall ever laughing harder over the course of a contest.

I mean, what other group except for SnakePitters, would see a pitcher called "Crow", and start quietly singing the theme to Mystery Science Theater 3000?

Mrs. SnakePit and I got over to that part of town early, and opted to park at the Talking Stick Resort, have dinner there, and then catch the shuttle to Salt River Fields. We can certainly recommend the Wandering Horse buffet, where we made up for having skipped breakfast and lunch [two desserts? Oh, go on then...], and then the shuttle dropped us over at the front door of the park - officially, you are supposed to be members of the Players' Club, but there wasn't exactly much checking going on.

By happy coincidence, we arrived there at exactly the same time the socos showed up - all three of them, this being the occasion of soco jr's first ever game. Not that he'll remember much about the event. being only four months old, but it has to be said, baseball seems to be in his genes, as he was a model child for virtually the entire game [even if his score-keeping abilities still need a little work]. We headed over to right field, and took up a position down low on the berm, by the foul pole, which was used to shade the pram. The kishis, who had been off foraging for snacks, soon joined us, on what was to become a very crowded lawn... 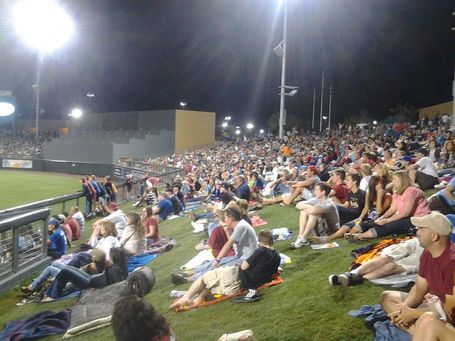 The main reason this game had been chosen, was because of the presence of the SnakePit's Favorite Player Not Playing For The Diamondbacks, Jeff Francoeur. Last spring, he had been the target of our surreal cheers as he played right-field, and seemed to enjoy it, recognizing the 'Pitters more than once. So, when we saw a Saturday against the Royals, it was immediately circled on the calendar. Adding to the enthusiasm, was that this was a night game - it has to be said, the sun being down makes for a much pleasanter viewing experience than having to slap on the SPF eight billion. But would Frenchie remember us?

Early signs weren't promising, and he stoically remained focused on the game in front of him. But, at some point, it seemed a light went on: "Oh, it's those guys..." and he acknowledged our surreal attentions, as we inquired about his opinion on The Hunger Games, and whether he thought the book was better than movie, among the usual broad range of topics. He lobbed a ball our way, which I briefly snagged despite paying absolutely zero attention at the time. I say, "briefly," as I was immediately Bambi-eyed by one of the small children roaming the lawn. Mindful of the Pit's reputation, and with no wish to go viral ["Selfish Man Hogs Ball From Child"], I handed it over to her.

There were many other young ball-hawks roaming the park, vocally requesting demanding balls, with a mixture of pleas and outright lies ["I'm a Kansas City fan!" yelled one, hard to believe given the Rockies shirt he was wearing...]. The clip above, from Finding Nemo, gives you a good idea of what it felt like, as they flocked from one part of the outfield fence to another. It got pretty irritating when they were packed right in front of you, Mrs. SnakePit muttered dark things, promising a mass toppling if the kids didn't get off our damn lawn. The boys also had a fondness for taking their shirts off en masse and waving them over their heads, which was, frankly, a bit creepy.

On the way in, I had remarked on a message on the Jumbotron, welcoming a fan from Germany over to his first game, but Mrs. S mistook this for me saying we were expecting a German in our group. From this angle, developed an entire thread of discussion - helped by Babefishing on my phone - as to what such a version of the 'Pit would be like. The consensus would be called Das Schlangegruben, making me Herr Schlangengrubenführer, and with soco jr. being the founding member of Das Schlangegrubenkinder. Uniforms are being ordered as we speak. Hey, at least the Gameday Threads will run on time. [And trust me, we got a lot more non-PC than that.] 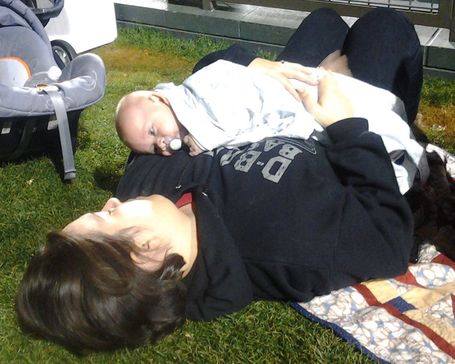 We were also graced by the asteroids and Turambar, as the game went on, who joined in with the cheering, hooting and hollering ("'Cos it's root, root, root for FRENCHIIIEEEEE!"), as the game itself, mostly unfolding 400+ feet away, slowly receded into irrelevance - mrssoco, for instance, was perpetually amused by my pronunciation of the word "buffet", flailing like an amphetamine-crazed Muppet every time I said it. However, do not mention the Tarantula Hawk wasp around her, as Turambar's description of the creature was truly the stuff of nightmares. I mean a two-inch long wasp? Amber wings? A SyFy original movie beckons...

Even after Francoeur was removed from the game, we persisted, labeling his replacement "The Anti-Frenchie", as the game wound down to its conclusion. We hopped on the shuttle back to the casino - the crowd on the return journey were rather more boisterous than the way out! - failed to hit the jackpot on Mrs. SnakePit's favored slot-machine [actually, I've never seen $40 vanish so fast!], and headed back to SnakePit Towers, tired but very, very happy. There will be plenty more baseball games this year, and in all likelihood, one or two of them might just involve socializing. But they'll be very hard pushed to match the quality of this one, or its sheer entertainment value. 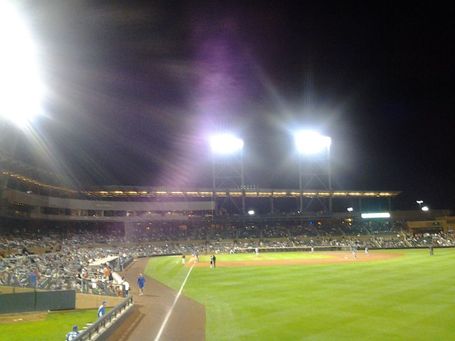