Share All sharing options for: SnakeBytes, 3/2: Then There Were 10 Edition

So, it's official. There will be two extra wild-cards in the post-season this year, one for each league [I think that's worth stating, in case you thought Bud Selig had simply given them both the AL East]. The two wild-cards will face each other in a one-game playoff to get thing going, with things progressing on from there, more or less as usual. However, the late announcement of this - after the 2012 schedule has been announced - means that there's no room for a travel day. So the Division Series will see the lower seed start off by playing two games at home, with #3, 4, and 5 as necessary, now taking place at the higher seed's park,. Quite why there was such a rush escapes me...

After the jump, there a round-up of the news from the last day before the Cactus League gets under way. Woo-hoo! And then, there was also this...

Tyler Skaggs will not start tomorrow as precautionary measure due to shoulder soreness. @BauerOutage will start tommorrow @SaltRiverFields 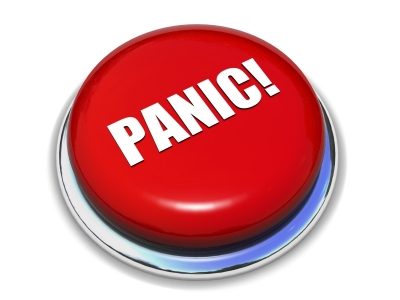 Everyone the Shoulder is fine!!!! It felt great today excited for the first game of #SpringTraining tomorrow

Phew. That was a brisk couple of minutes, huh? Steve Gilbert said it was just a "Little tenderness in front of shoulder," and that Skaggs was already feeling better - the team was just being uber-cautious. Seems there's no real cause for concern, given that Skaggs is still scheduled to throw a bullpen session on Sunday. It does mean Trevor Bauer will start tomorrow's game at Salt River Fields, with Patrick Corbin now scheduled to be the first man out of the bullpen. Nick Piecoro added that Gibson said our prospect felt "the soreness or tenderness or whatever" yesterday, and it was already gone shoulder today. Nothing to see here, folks...

Another pretty short day for the players today, it seems,.but there was some other news. The first weekend of games at Salt River Fields are now officially sold out, with the Diamondbacks "visiting" the Rockies on Saturday, and their official "home" opener the following day against San Francisco, both filled to the max. Between them, AZ and COL have already sold over 232,000 tickets, which is almost two-thirds of the record tally sold last year, and would be a record for a two-team Cactus League facility, except for 2011's number. As noted elsewhere, Monday will see JenFest2012, so we expect a rush of tickets for that. :)

If you're interested in knowing who's going to be where for tomorrow's opener, Steve Gilbert snapped a pic of the travel arrangements. Looks like players in green will be staying at Salt River Fields, and the rest will be making the short trip up o Scottsdale Stadium to see the Giants. So if there's a particular player you're looking to see, this should help. Of course, given the above paragraph, if you mistakenly got tickets for Scottsdale, it's really a bit late to swap 'em out... 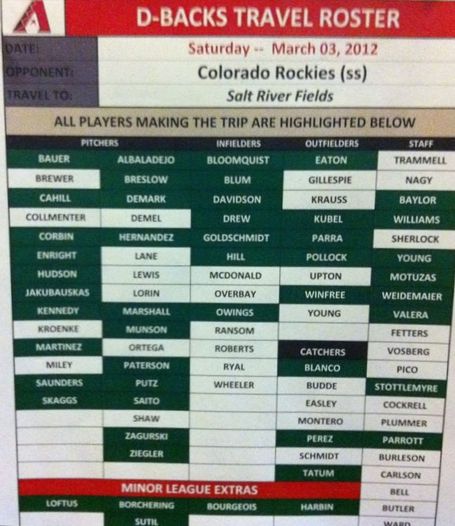 The radio broadcast schedule came out too, with all 162 regular-season games being on KTAR and ESPN Deportes 710, with the return of Greg Schulte for his 15th season, and the rest of the crew. They're also bringing back Diamond Talk for half an hour of chat after each game, which I'm pleased to hear, as I enjoyed listening to that on the way home. One step up is that 19 spring training games will also be broadcast: as well as the weekend ones on KTAR, Tuesday and Wednesday games will be streamed on mlb.com.

'Pit friend Donny Baarns, from the Visalia Rawhide will be working most of those, with Jeff Munn,. so that should be worth a listen. Donny said in an email, "I'm really looking forward to it, and I hope that D-backs fans will be tolerant of an unfamiliar voice (I know what it's like to hear a voice you're not used to calling your favorite team). I'm excited to do these games and am working hard to prepare for them. Good players don't take spring training lightly and I won't either." Fans who remember the awfulness which was Ken Levine from 2010 - the man described the hardly-obscure or anonymous Ryan Roberts as "an unidentified Diamondback" - will be glad to hear that!

With extending Miguel Montero now on the back-burner, the team appears to have turned their attention to the men at the front of the rotation instead. While Kevin Towers didn't specifically name them, Jack Magruder reckons he was talking about Ian Kennedy and Daniel Hudson when he said, "We have several guys here who we have talked about. We haven’t engaged any of them as yet. That’s not to say that at some point in time we might end up seeing if there is some common ground." Towers seems keener on long-term deals for position players, but added, "When they are young and in their prime, there is probably less risk for injury than when they are in their 30s."