Behind The Scenes With The MLB Network

Share All sharing options for: Behind The Scenes With The MLB Network

It's not too much of an exaggeration to say that the MLB Network has radically changed the viewing landscape, especially for the hardcore baseball fan like myself, who has little time for the other major sports. Basically, I never watch ESPN any longer, saving me from having to sit through endless NFL, NBA and college updates - especially in the off-season. For someone whose sporting interests are basically "all baseball, all the time," it's nice to have a network with a similar philosophy.

With spring in the air, the network is hitting the road, both with their 30 Clubs in 30 Days series, now in its fourth year of production, and also with the informal and irreverent chat-show Intentional Talk. Both shows were being taped just down the road from SnakePit Towers at Goodyear on Wednesday, and the 'Pit was invited to check out what went on behind the scenes...

[The Diamondbacks' 30 Clubs in 30 Days episode airs today at 5:00pm MST. Hosted by Matt Vasgersian with analysis from Kevin Millar and Larry Bowa, the episode will feature on-site field reports, analysis, and interviews with Kirk Gibson, Miguel Montero, J.J. Putz, Trevor Cahill, Joe Saunders, Ryan Roberts, Chris Young and Justin Upton. Trevor Bauer will also discuss his unconventional pre-game routine and delivery in a demo - that should be fun to see! - plus Geoff Blum will give a tour of the complex. The episode will look at projected lineups, pitching rotations and previews of top prospects for the 2012 season and beyond.]

Like most TV programs, production resembles a swan: the end product looks smooth and serene, but the viewer doesn't get to see the frantic paddling required beneath the surface, to achieve that immaculate illusion. 30 Clubs in particular has several aspects in its production which are problematic. It not only requires interaction between reporters in the field and those back at network HQ in Secaucus, New Jersey, but the schedule requires shooting over multiple days. It's typically a three-day cycle, with two days of physical shooting on location, and the episode airing on the third day, after being edited together at home base.

However, since the title is not 30 Clubs in 90 Days, this means there are multiple episodes being filmed concurrently. MLBN have two crews out in Arizona, working on separate episodes at the same time. While one crew is at Camp A, getting things started by filming b-roll, interviews, demos, etc. the other crew is at Camp B, finishing off another episode, by shooting footage for that show, which will air the following day. The need for organization and planning to avoid a descent into anarchy, chaos and insanity is obvious: ensuring that happens are among the (thankless) tasks of producers like Mark Capalbo and Mark Caiafa. There are spreadsheets involved. Lots of them.

It's a bit like peering into a bee-hive. To the untrained eye, i.e mine, there is a good deal of milling around, but everyone has their role, and stuff gets done, because everyone knows their job and is working toward the same end. The crews are fairly sizable: there's about 16-18 people in Arizona for Talk, including camera and lighting men, technical managers, audio managers and operations managers. [Yeah, even in the glory which is an Arizona spring, you still need artificial lighting!] 30 Clubs doesn't need as many people on the road, partly because a significant part of that show is produced in Secaucus, and the crew for it is ten or less.

Even beyond the organizational aspects, production is an impressive technical exercise, generating several hours of footage per day, which has to be ready in time for the late-afternoon slot on the satellite feed, when it all gets beamed back to base. It''s likely something which would have been impossible, or at least a great deal more difficult, until recent advances in communications technology. These advances were to be found in the truck with the large dish, parked just on the other side of the stadium fence.

On the human side of the equation, most of the MLB Network presenters are former players, and that's apparent in the clubhouse-like banter which flows between them, even when the cameras are not running. Making the move from the field to the booth has presented some interesting challenges. As Intentional Talk co-host Kevin Millar put it, "You don't go to school to learn how to broadcast. Every day, you're still learning something... I think once you stop learning, you don't get any better." He still finds interviews a challenge: "I've always answered questions. So learning how to make it a conversation and ask questions of other players, that's the toughest part." 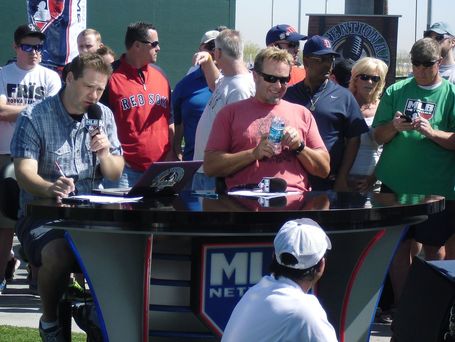 Chris Rose (left) and Kevin Millar, getting ready to record Intentional Talk in front
of a live crowd at Goodyear Stadum

For Dan Plesac, one of the 30 Clubs presenters, patience was something he had to learn. "When you're playing, you control everything. If you just don't want to do an interview, you don't do an interview. You can come up with an excuse why not to do it - I've got a meeting, I'm running late. As a player, I don't think you realize how you don't accommodate requests from the media. Someone's waiting for you at 1pm to do an interview, and if you get there at 1:20, the hell with it, make them wait. But when you're on the other end, you're there at ten minutes to one, waiting to sit down and do an interview, and the guy's not there, it's irritating."

What was clear is a genuine enthusiasm for the game. That was displayed by all the hosts, and manifests itself in a strong personal involvement with their shows. Chris Rose, the other half of Intentional Talk, said "I love to get my hands dirty," describing himself as "a producer that just happens to be on television." Rose explained his broadcasting philosophy further: "I think when you take ownership in a show, it invests you a little bit more, you're not just showing up five minutes beforehand and saying, "Hey guys, what are we doing?" Personally, that's not the way I like to do business."

Plesac is similarly hands-on with his segments, but also is aware of the limits of his knowledge. "I'm the last guy that's going to break down a hitter's swing... I have one hit in 18 years of baseball. I don't expect you to believe me and I'm not going to sell that, because that's not my area of expertise. But when it comes to pitching, I have strong opinions about things, and I voice them.. If I feel really passionate about something, I'm going to do it, it'll get done. But I'm not going to do something that I don't feel I can put my name behind. When I get off the air, I stand by what I say." 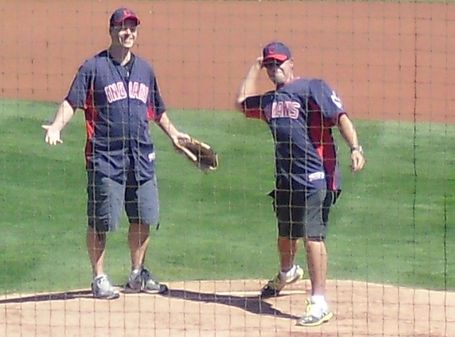 Millar and Rose also threw out the first pitch - to be taped and analyzed on future shows...

Intentional Talk comes over as a casual chat between two friends - which it is, Rose and Millar having known each other for eight years. "We always talked about wanting to do a show together," says Rose, "And here we are. I don't know if the executives regret it." There doesn't seem much pretense either. "That's the way we are. He's the nutty, crazy guy and I'm the guy that's got his hand on his forehead half the time, based on what he's saying. When we're hanging out, I look at him - "Are you kidding me?" His oldest kids are six, and I'm like "You have the mentality of a four-year-old!" some days, but that's the thing that makes it fun."

Millar enjoys the uniqueness of the show, saying "There's nothing like it in baseball." To him, it's about showing the human side of the players, which is easy to lose in a world where they are often reduced to their name and their salary. "There are some great personalities. They've got kids at home crying, they've got dogs that are taking poops in their yard... Let's see the dogs, let's see the family, what car you're driving, I want to talk about the normal life stuff. What position you played in high-school, what sports you played. And if you played tennis and wore some godawful outfit, we'll try to find it!"

But even on a "cocktail hour" show, as Rose calls Intentional Talk, preparation seems important for the presenters, across the board ."It's a very difficult job to be good at, if you don't put the work in," says Plesac, who spends two hours or more each night, simply looking at the day's results. "You have this adrenalin rush right when you get off the air, it's hard to go home and fall right asleep. So what I try to do is, go over the box-scores. And something might jump out at me: hey, this guy pitched well, I'll do some research on this guy. [And if] J.J. Putz has strung together ten scoreless outings, then I'll maybe have an idea to do a breakdown or a demo."

One of the challenging things for MLB Network presenters is having to keep up on all 30 franchises. "Some teams are easier," says Plesac. "The major market teams that play on national TV, you're more familiar with. But it's a challenge." Rose agrees about that aspect, though adds that he doesn't find the work involved a chore. "I'm not going "Oh, boy - I have to watch another one of these games?" That's not it. I enjoy watching, I enjoy trying to find some of the young players that you don't know about."

Plesac sums up what makes the channel what it is. "This network has given baseball fans a completely different way to look at baseball... We have the time where we can go in depth and break down games, break down pitchers, break down hitters, teams that are hot, teams that are not. We have the time to do it." As a final word, he adds, "If you love baseball, this is the channel to watch." It's very hard to argue with that.

[Thanks to Kevin, Chris and Dan for their time, and also particularly to Lou Barricelli of MLB Network for his invaluable help in putting it all together. As well as talking about the network, I also quizzed the presenters about a lot of other topics, such as the upcoming season and the D-backs chances of repeating. That will all be posted next week in "MLB Network: The Raw Feed." so stay tuned for that!]