Diamondbacks 2, Indians 3: Saunders Downed But Not Out

Share All sharing options for: Diamondbacks 2, Indians 3: Saunders Downed But Not Out

Well, the loss is one thing, but I don't think Arizona will mind too much, after seeing starting pitcher Joe Saunders hit on the side of the shin by a sharp comebacker off the bat of Cleveland's Carlos Santana, only two outs into the game. He had to be removed, and my memories instantly flashed back to last spring training, where we lost Zach Duke to the DL after he fractured a bone in his hand while pitching against Colorado. Even more ominously, that was a year ago to the day. Fortunately though, there doesn't appear to have been any significant damage this afternoon, and Saunders should be fine. Phew.

"I probably could have stayed in the game, but it was pretty sore pushing off. But that's when they said enough's enough. They played the side of being cautious and I can't really fault them for that. If I got hit on the shin bone, I'd be toast -- so fortunate that didn't happen. My arm felt good. I felt like I was going to throw pretty well today so that's a disappointment. It was coming out good, though, so that's a positive."
- Joe Saunders 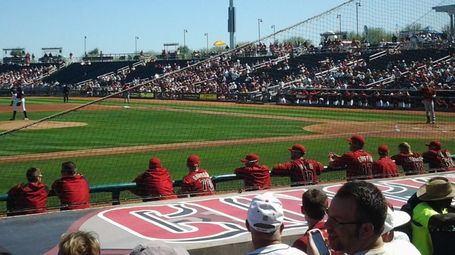 Mrs. SnakePit and I made the trip to Goodyear to see this one: if you're going out there for any other games, you probably want to add an extra few minutes for traffic. Even though there was only a little over five thousand in attendance, the car-parking situation seemed rather disorganized, and we had to pull at least two U-turns before we reached a lot with space - albeit space off the end of the tarmac. We were just getting in to the lot when we heard the national anthem coming from the park, but fortunately, we had already got tickets, so we didn't need to join the long line of purchasers, and were able to see Willie Bloomquist rifle a double to get Arizona started.

The D-backs proved successful at getting him over and getting him in, Willie scoring on a groundout by Jason Kubel. A Chris Young double put another runner in scoring position, but he was stranded, and then the bottom of the first unfolded as above. To replace Saunders, the team went with Joe Martinez, who allowed the inherited runner to score, plus one of his own, and was somewhat fortunate to escape further damage, getting Aaron Cunningham to strike out with the bases loaded. [If Cunningham's name is familiar, he was once an Arizona prospect, part of the package sent to Oakland for Dan Haren. He's been through the Padres too, on his way to Cleveland]

Martinez's outing took him through the third inning, with five hits and a walk over 2.1 innings. Zach Kroenke worked the fourth, but he also struggled, walking in a run before also escaping with three Indians on base, on two hits, the walk and a hit batter. However, the rest of the pitching was more solid: Bryan Shaw, Joe Paterson and Jensen Lewis each faced the minimum, with Paterson looking particular good, making his first two hitters look like little leaguers with a beautiful pair of strikeouts. Between them. Paterson, Lewis and Brett Lorin have a "perfect game", having retired all 27 batters they've faced this spring.

Unfortunately, the Arizona offense just couldn't take advantage of the many opportunities they had, going 1-for-14 with runners in scoring position. Bloomquist drove in the Diamondbacks' only other run of the afternoon, scoring Rusty Ryal from second, and finished the day with two hits and a walk. Chris Young also had a pair of hits plus a stolen base, and Adam Eaton had a good day, with two hits, a couple of hard-hit outs (one of which we thought was going to get out of the park) and a #gibbyup [(TM) 'Charmer Productions, Inc 2011] endorsed hard slide into second to break up a double-play.

We did get to see Good Wheeler - and it was necessary to label him, since the Indians also had a Wheeler of their own this afternoon. He came in as a replacement for Paul Goldschmidt at 1B, though struck out to end the game. We were going to yell "Good Wheeler!" as Ryan came to the plate, but we were thrown as the public-address announcer seemed to announce him as "Dan Wheeler", who is actually the Indians' evil nemesis. The nefarious plan worked: by the time we'd worked out what had happened, the moment had passed, and a few pitches later, so had the game, with Arizona dropping to 3-6-1 in Cactus League play.

We quite like the park, and particularly liked it after the sun went down far enough to put our seats in shade. As well as a plump sausage with cheese and grilled onions, we enjoyed a mango ice, some chips and queso and a couple of shredded pork tacos, all of which were tasty. Mrs. SnakePit was particularly impressed with the Mr. Softee van parked on the concourse, this having been a staple of her youth in New York. It's probably not as pretty a park as SRF, not least because the main field seems some way off from the other parks, but it does have its own charm: we noted the open-air bar in the outfield which would seem a fun place to see a game. 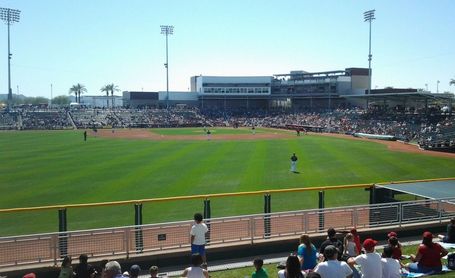 A brisk Gameday Thread, passing 500 for what I think is the first time this spring. Bcawz came out on top, falling ten short of three figures, and was followed by soco and snakecharmer. Also to be found in the comments were: NASCARbernet, Clefo, Bryan J. Boltik, kishi, Rockkstarr12, Muu, justin1985, blue bulldog, txzona, PR151, hotclaws, asteroid, BattleMoses, rfffr, Jim McLennan and Dbacksrock8.

It's back to Salt River Fields for Arizona tomorrow, as they take on Albert Pujols and the Angels, with Trevor Cahill starting and Tyler Skaggs also slated to pitch - Anaheim will start Dan Haren. This game will be on Fox Sports Arizona, and will also be screened later on the MLB Network. I'll actually be heading back to Goodyear personally, on a project that will come to fruition later this week - by coincidence, that will also be Yu Darvish's second spring start, so I'm sure there'll be a good crowd for that. Of Japanese media personnel, if nothing else...