I got the group outing chart through from Geno last week, and took a look at it over the weekend to begin the process of looking for dates that might be suitable for SnakePitFest v5. However, on checking the price-list, I got a bit of a nasty surprise. It's not all a direct raise - they've changed the way in which games are put in to price bands. There's no price list for single games available at this point, but if those are being priced in the same way, it marks a fundamental shift...

Over recent seasons, the tendency for most teams has been to go towards a model best described as "airline pricing", where the aim is to relate the cost of any ticket to the demand for it. This can be done in a variety of ways, up to the near-mystical level of the Giants' dynamic pricing scheme, which takes into account not just the opponent, but special promotions and even who is the starting pitcher. Arizona, however, simply divided their games into a series of bands, and adjusted prices based on those. Here's what last year's group price chart looked like, with the SnakePit's favorite section, behind our bullpen on the lower level, outlined in white. 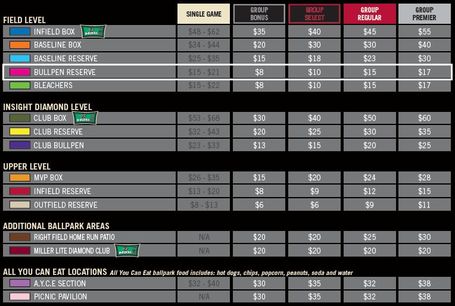 But you get the picture. The opposition? Irrelevant. On the other hand, since we have had people coming to this event from all four corners of the state [including, literally, Four Corners], SnakePitFest has to be on a weekend. We're not a local church or school, for whom a week-night could be a practical proposition, since it's just a question of showing up for first pitch, and beating the rush by leaving after the seventh. No, it's a full day, a SnakePitPaloozza celebrating our fandom. You wouldn't try to cram Mardi Gras or the Rio Carnival into a weekday evening, would you? Same for SnakePitFest. Which is why this year's ticket chart came as an unpleasant shock. 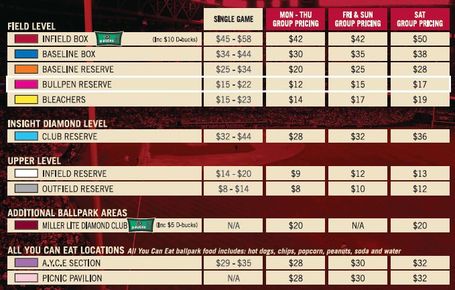 If you can't quite read the image, I'll summarize. Single-game ticket prices for Bullpen Reserve have hardly changed: they did range from $15-22, and now are $15-23. The most expensive group prices remain $17 as well. But the bottom end of group prices has evaporated entirely, with the $8 and $10 rates now a thing of the past; weekday games are $12, with Friday and Sunday coming in at $15. And the tickets to Saturday SnakePitFests v4.1 and 4.2, that cost us ten bucks last season? We would now be looking at paying $17, for the equivalent games in 2012. For the mathematically-challenged, that's a 70% increase. Ouch.

To a large extent, this new structure does make sense, in that it reflects the apparent demand for tickets - more so in Arizona than elsewhere, it would appear. Below is the average home and road attendance for the D-backs in 2011, by day of the week - I've excluded the Opening Day contests, both at Chase and Coors:

Here, Friday and Sunday games were about 20% better attended than the relatively flat numbers seen from Mon-Thu, with Saturday about 30% higher. The same sharp, consistent split does not seem to be seen in crowds seen by the team away from Chase .Saturday does remain the highest number, but Monday was second-highest, with three of the seven road dates there pulling in crowds of over 40,000. This might be the result of a scheduling quirk, with two of those games falling on holidays: July 4 in Milwaukee, and September 5 (Labor Day) in Colorado, the third being August 1 against the Giants. But in general, the differential does seem smaller elsewhere.

I can thus see the logic in encouraging groups towards those weekday games. However, I'm not sure a sharp increase in prices - many weekday contests were in the now-defunct low tiers - is the way to do it. The increase also seems to have been greatest, in percentage terms, for the cheaper seats, presumably most favored by groups, especially on the lower level. If we'd been in the bleachers, last year, the cost would have been the same as the bullpen reserve. This year, Saturday seats would be 90% higher, at $19; that's two bucks more expensive, for a seat further from home-plate, without a back.

The pricing doesn't seem too disparate from other NL West teams, though finding detailed info is not exactly easy. I did dig out the info for the Rockies, both regular pricing and for groups. The closest in terms of ballpark location appear to be the Lower Reserved, Outfield and Corner sections, the regular season price for which at Coors ranges from $17-26 - the group rates for the same tickets are $13-21, depending on whether it's a "Classic", "Premium" or "Value" date. I was completely unable to locate anywhere on the schedule that lists what games are which, so I don't know if they operate the same strict "day of week" approach as the D-backs.

[One thing I did see the Rockies doing, which I don't think we do, is offer "Splitseason Tickets", a set of web-based tools to help if you are getting together with friends to buy a season-ticket package in a group. It's something we've thought about doing, but the logistics involved has always seemed like a nightmare: a tool like this would seem to be a significant aid in the process]

But, as a consumer, all the above issues are less relevant, than the end result - which is a serious increase in the cost of our tickets. We could save a couple of bucks by shifting to a Sunday, and that seems a likely outcome. But the effect may well be to shrink from two SnakePitFests to one (or perhaps have an additional SnakePitTowersFest instead - tickets to our couch not being 70% more expensive this year...), not least because I can't afford to front the additional couple of hundred bucks in deposits required as a result of the increase.

Final decision will likely await the unveiling of the full promotional schedule at FanFest this weekend [personally, I will be getting the D-backs lucha libre mask from the July 7th game vs. LA!], but all thoughts, comments, etc. are welcome. Are people prepared to pay $17 for a Saturday game? Or is $15 on Sunday preferred? I also want to be very certain there's enough interest at the new, higher prices, so expressions of intent would be welcome [send no money now! We'll make sure you send us lots later!]