Spring SnakeBytes, 2/25: All Together Now Edition

Share All sharing options for: Spring SnakeBytes, 2/25: All Together Now Edition

First full squad workout tomorrow!Bout to be #OnAndPopping!!!Gonna be good to officially get out there with my team! #Big2012

Everyone should now be out at Salt River Fields, with the position players formally reporting yesterday, and arriving for their first sessions today.

As J.RyanWalters noted in his fanpost, the Nats may be interested in Parra. Bill Ladson writing they are "still looking for help in the outfield and they have expressed interest." Left-hander John Lannan is mentioned as on the block, and also that Washington have "a surplus of starting pitching." See the fanpost for discussion, i.e. D-backs fans shooting that down. However, for a cheap laugh, read the MLB.com story comments: Parra is "Interchangeable with Rick Ankiel HR and RBI-wise, with a higher BA but without the cannon arm." Er... Another suggestion is Parra for a backup catcher. No. Just, no. Man, I knew Washington DC wasn't a state, but it apparently is a state of denial...

Here's a bunch of other stories, which we trust are grounded more firmly in reality:

Tweet of the Day is a communal award, given to all those D-backs who covered the day's rookie spring training hazing, which appeared to involve sending a bunch of the n00bs - Trevor Bauer, Charlie Brewer, Tyler Skaggs, Patrick Corbin and, for some reason, Josh Collmenter - out to the RenFair dressed in appropriate garb... Daniel Hudson first broke the story, but those Tweeting in included Barry Enright, Rossmel Perez and Adam Eaton, as well as Brewer, Corbin and Bauer.. Why, yes - yes there were pictures, thank you for asking... Here's Barry's, showing the whole group, but I'm going with this one from Charlie B, of Collmenter "fueling up our Renaissance horse" 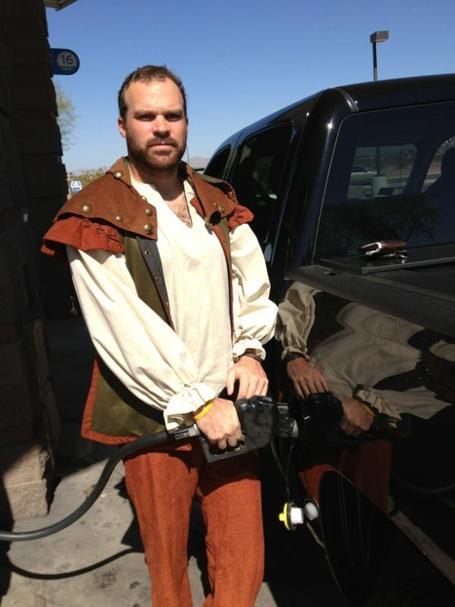