Diamondbacks Spring Training: It... Has... Begun...

Share All sharing options for: Diamondbacks Spring Training: It... Has... Begun...

What a frenzied moment that was, didn't they maintain an exhausting pace?
What a thrilling, absolutely chilling, running of spring training Opening Day...
[With deep, heartfelt apologies to Lerner + Loewe]

Never have so many, so ardently watched, so many professional athletes...jog at a moderate pace from one end of a lawn to the other. Reports suggest a big turnout of fans at Salt River Fields for the first day of "proper" workouts, with even the pitchers and catchers who phoned in their 'reporting' yesterday, showing up for duty. However, if you were expecting any revelations to be unfolded for the hundreds in attendance, you'd probably have been better off sitting home watching Judge Judy. Welcome to spring training, folks! But, hey, it's still baseball, dammit!

Let's start with the only real nugget of significant information today, as Jack Magruder brings us the first update on Stephen Drew taking ground-balls:

He worked for about 15-20 minutes before taking a turn in the batting cage. "It was weird and good at the same time. Overall, I was pretty pleased. It was a good day," Drew said. Drew began hitting earlier in his rehab process and expects to be on the same schedule Tuesday, ankle permitting. "We’ll see when I come in", Drew said, referring to his arrival on Tuesday. "That will be the key -- how much can I do before I can’t do anything and have to take two days off? We are kind of playing it by ear."

Admittedly, the work consisted of Kirk Gibson hitting balls with a fungoe bat at him from the pitcher's mound, but it's a start. If he has already been hitting, that would seem to be good news as well, since that's something you can't do without a stable platform in your ankles. Gibson appeared impressed: "He had more movement than we thought he would have at this point. (Monday), was a big first step."

That's about it for the opening day, and I think any actual 'news' is likely to be thin on the ground until the full roster shows up at the end of the week. So don't get over-used to these updates, since I won't necessarily do 'em, unless there's sufficient information - or, at least, amusing Tweets from our inside spies, e.g. Mr. Harry Penwright [not his real name] to merit these. But still, here's a few bits of randomness.

Leave it to baseball to make you feel like a kid again. #jackedup like its the first day of school! #ilovethisgame

First day of @dbacks Spring Training today. Really fired up! So blessed to be able to consider a baseball field my place of work.

Photo of the day comes to us courtesy of Barry too: looks like John McDonald is being honored with some "special" treatment in the locker-room this season... 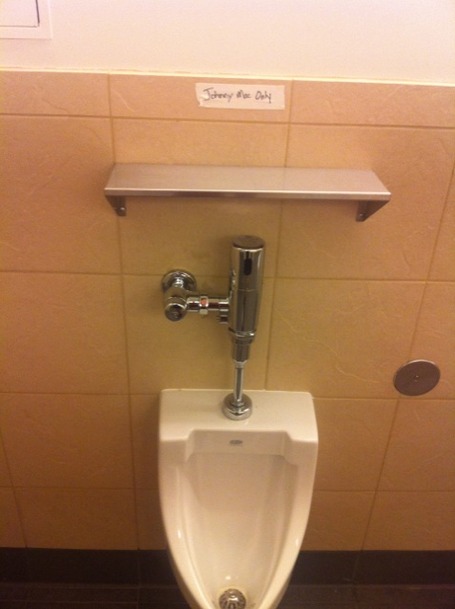