Today's is the 100th anniversary of Arizona becoming a state, so I figured it'd be nice to commemorate the occasion by picking an all-time team of players who were born here. I vaguely recall having done something like this some time ago, but couldn't locate the details - I know I certainly discussed Flame Delhi [the search function on the 'Pit doesn't go back far enough to locate it]. Regardless, I started this one from scratch. though apologies if any of this is familiar - given the centenary, it seemed particularly appropriate to do!

89 major-league players in history have been been born in Arizona, less than one-half of one percent of those in the game. Still, it's more than 16 other states - though not the District of Columbia, which has had 95 born within its borders. By coincidence, this is exactly the same amount - for now, anyway - as were born in the British Isles (42 in the UK, 47 in Ireland. Interesting more come from the latter, which has a much smaller population, but I think its inhabitants were more likely to emigrate in those days; the last Irishman played in 1945). It's also less than six other countries: Dominican Republic, Venezuela, Canada, Puerto Rico, Cuba and Mexico.

If you look at the history of Arizona players, you'll see that the overall numbers very closely match the expansion in the inhabitants of the state. Here's a graph plotting major-league debuts per decade against state population, for each ten-year chunk since we came into statehood (population is at the start of the decade in question, and to get the scales matching better, is measured in sixths of a million). 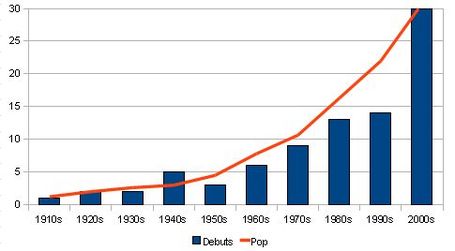 You should note that the population of the nation as a whole has also increased significantly over this time - as has the numbers of players in the majors, though not as fast. In 1912, 604 players were used, with a population of 95.3 million. Last year, while about twice as many (1,173) players were used, the American population had more than tripled, to over 310 million. So relatively speaking, it's harder to make the majors now, than it was a century ago - even discounting the rise in foreign-born players, which made up 25.1% last year, and only 3.8% in 1912. But in that time, Arizona's population has increased more than 30-fold, hence the growing representation of the state.

That's also shown in the chart below, which plots the number of Arizona-born players active in the majors since the beginning of the twentieth century. These numbers mirror something similar, but we see particularly explosive growth of late, with the number doubling from 2005-08, before dropping off a little over the past couple of years - though we are still seeing a figure in the high teens, unprecedented prior to 2007. Also, there were a mere two Arizona players in the majors as recently as the 1977 season: White Sox closer Lerrin LaGrow and future Cy Young winner, John Denny. 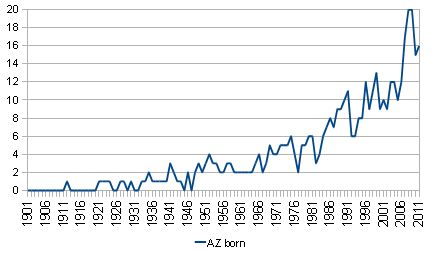 Of all those Arizona-born players, I've assembled a team of the dozen finest from the copper state [random factoid: we're one of only two states to have an official state gun]

C. Ron Hassey: Tucson, 1978-1991, 12.6 WAR
Hassey's main claim to fame is as the only player to catch two perfect games - Len Barker in 1981 and Dennis Martinez a decade later. He played for the A's when they made the World Series three times, in 1988-90. He didn't play in it the year they won, 1989, but hit .323 over his 16 post-season games. Hassey stayed with the game after putting away the catcher's mask. He was a coach with the expansion Rockies in their inaugural season, and worked as a scout for the D-backs from 1997-2003. He's currently manager of the Jupiter Hammerheads, the High-A affiliate of the Marlins.

1B. Shea Hillenbrand: Mesa, 2001-2007, 4.5 WAR
Despite a somewhat fraught relationship with management in both Boston and Toronto, he seemed to have no public issues in Arizona, after being traded here for Byung-Hyun Kim. Though he only accumulated 0.3 WAR in 233 appearances for the Diamondbacks, he still holds the franchise record for total bases in a game with 15, going 5-for-5 with three homers against Colorado. Last seen in organized ball in 2008, but Hillenbrand still lives locally. The animal-rescue operation he ran with his wife, Marley Farms, closed last month - their new home seems to have caused a bit of controversy,

2B. Solly Hemus: Phoenix, 1949-1959, 25.3 WAR
To start with, why not check out this 1954 Sports Illustrated story about the joy of collecting baseball cards - and the rarity of this player... Hemus was one of the last player-managers in baseball, a species not seen since Pete Rose (and that ended well, didn't it?), appearing in 24 games for the 1959 Cardinals while also running things from the dugout. Hemus was the Carlos Quentin of his day, leading the league three times in HBPs. Two of those came during his best seasons from 1951-53, when he was worth 15.4 WAR, though never finished higher than 31st in the NL MVP voting.

SS. J.J. Hardy: Tucson, 2005-present, 13.9 WAR
Hardy has pro sports in his blood, being the son of a tennis pro and pro golfer. He played his baseball at Sabino High School in Tucson, and was an All-State selection in 1999, 2000 and 2001, making All-American in the last year mentioned. It looked like Hardy was going to be a stud after making the All-Star Game at age 24, but he struggled in both 2009 and 2010, moving between Milwaukee and Minnesota. The Twins traded him to the Orioles for last year, and Hardy responded with his first 30-homer season and a career-high 117 OPS. At age 29, he should pretty much be in his prime, so this WAR total should increase significantly going forward.

3B. Jack Howell: Tucson, 1985-1999, 8.6 WAR
Howell used to be our hitting coach, but his services were not retained by the D-backs after the 2010 season, and he was hired in November by the Mariners to be their minor-league field coordinator. He had a pretty lengthy major-league career, spanning 1985-1999, though he had perhaps his greatest success in Japan, being named MVP of the Central League in 1992, batting .331 with 38 homers in only 113 games. After his MLB career ended, he was affiliated with Arizona in a number of positions, including managing the Missoula Osprey, and being hitting coach down in Tucson.

LF. Rex Hudler: Tempe, 1984-1998, 5.3 WAR
A true utility guy, Hudler started seven or more MLB games at every position on the diamond bar pitcher and catcher. He gained the nickname "Bug-Eater" after a game in St. Louis when he picked up an enormous junebug off his hat - his Cardinal teammates passed the hat and paid him $800 to eat it. After retiring, he became a color commentator, performing the task for a decade in the Angels' booth, before being replaced - a move not without controversy. Hudler will be working in Kansas City this year. Apparently, they've forgiven him for his 2003 arrest at the airport there, on possession of "marijuana and drug paraphernalia" charges.

CF. Hank Leiber: Phoenix, 1933-1942, 13.6 WAR
The first AZ-born player to get more than 50 at-bats, his career tally of 2,805 wouldn't be surpassed until Hassey did so in 1989. Leiber player for the New York Giants in both the 1936 and 1937 World Series, though his team lost both times. He ended Game 2 in 1936 with one of the longest fly outs ever: Joe Di Maggio caught the ball an estimated 490 feet from home-plate at the Polo Grounds, a mark unlikely to be repeated. Missed significant time in a couple of seasons, due to beanings from Bob Feller and Cliff Melton. After baseball, he returned to Arizona to work in real-estate, and died in Tucson in 1993.

RF. Andre Ethier: Phoenix, 2006-present, 12.0 WAR
Went to ASU, or so I vaguely recall someone mentioning once.

RHSP. John Denny: Prescott, 1974-1986, 29.5 WAR
Managed the rare feat of winning the Cy Young award, without ever going to an All-Star game - it hasn't been done since. It's kinda weird, since his first half ERA was substantially better (2.13 to 2.57), but this was a time when Winz! mattered, and Denny was 13-2 post-break, after reaching it only 6-4. Drafted out of high-school in the 29th round by the Cardinals, 1983 was easily his best season, Denny never reaching a dozen wins any other year. According to Wikipedia, Denny became a low-level pitching coach for us, but was fired in 2003, "following his arrest for domestic violence assault against one of his children and disorderly conduct."

LHSP. Alex Kellner: Tucson, 1948-1959, 12.7 WAR
Signed with the Reds at age 16, but it wasn't until seven years later that he reached the majors, having served in the Navy, on the destroyer USS Callaghan, in WW2. Maybe he is the original good-hitting Arizona pitcher? For Kellner batted .215 over 643 ABs, including a .733 OPS in 1957, one of his three home-runs that year coming off former All-Star Bob Keegan. One of only a few major-league pitchers in the integration era, to lose 20 games the season after winning 20 (1949-50). The wins came in his rookie campaign, but he came second in Rookie of the Year balloting to Roy Sievers.

RHRP. Bob Howry: Phoenix, 1998-2010, 9.8 WAR
If you've forgotten his time with the D-backs, you're lucky, as he and Kevin Jarvis the only pitchers in franchise history to post double-digit ERAs for Arizona, in double-digit innings. [The full list of all sixteen 10+ ERA guys is here. Man, some names on there...] Easy to forget Howry was actually damn good prior to that, with a 126 ERA+ over 731 games from 1998-2009, though reached ten saves just once, with the White Sox in 1999. Howry retired last February, and is one of only four players with 750 appearances, no starts and less than 100 saves; Guillermo Mota (717 games) may join the club this year. Mike Myers' 883 games is #1 on that list.

LHRP. Jeremy Affeldt: Phoenix, 2002-present, 7.6 WAR
Affeldt bounced between the rotation and the bullpen early in his career, starting 42 games over his first five years, in addition to 169 relief appearances. Since 2007, however, he has been a pure reliever, and has been highly-effective, posting a 140 ERA between Colorado, Cincinnati and San Francisco, putting him in the top 10 for leftie relievers (min 100 IP) over that timeframe. Affeldt seems like a pretty hardcore Christian, looking at his blog, but that didn't help him last September. His season came to an untimely end, after he badly cut his hand separating burger patties. He was rumored to be available for trade this winter, but still seems to be with the Giants.

Note that this list is largely independent of players who were drafted from Arizona educational establishments, which would be a much more impressive roster. For amusement, here's that list:

Finally, as yet, only six players born in Arizona have played for Arizona. Two were mentioned above (Hillenbrand and Lopez): I was going to naming the other four a trivia question, but it's probably damn near impossible, so I'll just list them: Ed Vosberg (1999), Albie Lopez (2001), D.J. Carrasco (2010) and Cody Ransom (2011). Who'll be next?