Share All sharing options for: The Fest Wing: Diamondbacks FanFest 2012

Let's get this party started. It's a whole different vibe to an off-season when you come off a division title. Sure, every winter, you look forward to spring, but the feeling for Arizona fans this winter is definitely skewed more towards expectation than hope. That was apparent in the massive turnout for the FanFest at Chase Field this morning: estimates were that anywhere up to 25,000 fans were present, which would be double the number from last season. S'funny what winning does for fan interest!

Needless to say, the SnakePit was there, representing like a....representing thing. Whatever that means. Pics and commentary after the jump. 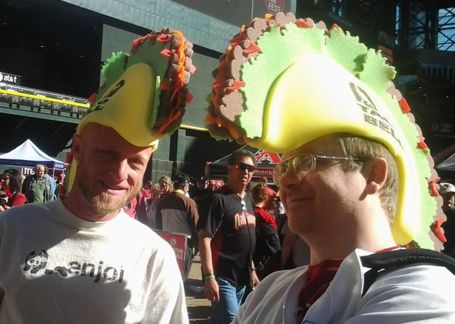 We arrived a little after 10am, splashing out the five bucks for parking nearby. A kind SnakePitter, unable to use their season ticket early entry ("not morning people" - to which we can relate!) had passed us their early entry passes, and so we were able to get in immediately at Gate A, rather than the very long regular line. Matters were also speeded up by our disinterest in the autograph tickets, and we headed more or less immediately down to the field - which was already significantly populated with other early birds.

As is traditional, we made a bee-line for the Diamondbacks Yard Sale, and it seemed we weren't alone in this thought, as was obvious from the concourse - it was easily the most populated corner of the field at this point. The main theme this year seemed to be "leftover All-Star stuff," with a whole host of T-shirts, caps, programs, and other items from the festivities. Twenty bucks would even have got you an ASG voting booth. I momentarily thought about getting one - it'd look great in the corner of a den or office... - but wiser counsel [Mrs. SnakePit] prevailed. Speaking of historical memorabilia, I was intrigued by one blast from the past. What's wrong with this picture? 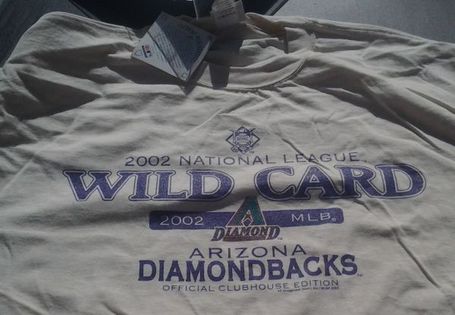 The answer is, of course, that the D-backs were not the 2002 NL Wild Card, they won the NL West. However, they might have been, with only a two-game lead over the Giants in the final week. Generally, I thought this "phantom memorabilia" was destroyed, so interesting to see some of it apparently resurface a decade later. We also picked up a trio of the Mark Reynolds batting practice jerseys for a dollar. Not each: three, for a dollar. This was mostly a gesture of pity by Mrs. SnakePit, so we may end up giving some of these away to (more or less) deserving applicants. Otherwise, I was pretty restrained: after all these years, I think I have enough stuff. Well, almost...

The other main pleasure is seeing just about everyone - players, staff and coaches - interacting with fans. Whether it was Wade Miley running around the wiffleball fields, chasing down fly balls, with Matt Williams hanging out in the field next to him, all the way up to the panels, where the likes of President Derrick Hall and GM Kevin Towers took questions from the crowd. Good to see Derrick looking well - last time I saw him was the Tweet-up, the night before his prostate cancer diagnosis was announced - and I briefly got to chat to Kevin, and thank him for talking to us. Turns out his family was originally out of Ireland, so we compared Celtic bloodlines. He does have more of a tan. :) 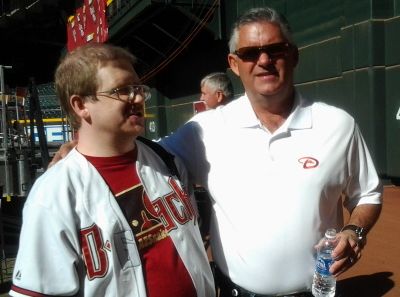 Couple of new innovations this year. One that was particularly good, was getting some concession stands down on the field, including Streets of New York and Macayo's. That removed the need for the long trek back up to the main concourse. Though "removed" is probably less the case than "delayed", as eventually those carbonated beverages made their way through - and there was no escaping the stairs there. There was also the D-backs Digital Pavilion, showcasing the team's social media outlets, with a Hashtag Scavenger Hunt; we got as far as finding six of the eight, before my phone battery and the queues for the Clubhouse Tour combined to defeat me.

That was certainly an overall issue: the line for that stretched almost across the entire field, and the lines for autographs, pictures, etc. were similarly monstrous, and reports suggest our early arrival helped us miss the worst of the carnage at things like the yard sale. This is, to be honest, only to be expected given last year's success, to some extent. However, looking back at our report of the 2008 Fanfest - which also took place after we won the division - it doesn't seem to have been on anything like the same scale. That could seem a hopeful sign that the team is genuinely getting people enthusiastic, not just bandwagoning, which is great. 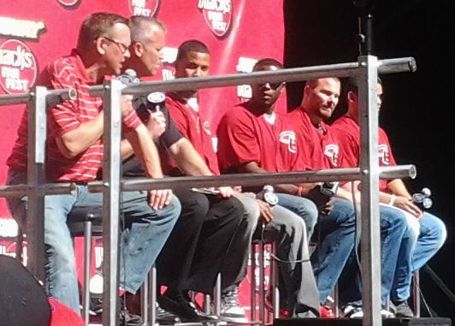 The only SnakePitter I bumped into was Kishi, who had just won a Joe Paterson autographed ball playing Kachingko - I was up there scavenging the hashtag there. I do know there were a good few others in attendance, but again, with so may people in attendance as a whole, the odds of bumping into selected individuals were sharply lower this year. Still, it was fun as always, and equally as always, sets the stage and whets the palate nicely for the coming season. Pitchers and catchers report in eight days, folks!