Brandon McCarthy: Sinkers, Twitters And A Potential Bargain For The Diamondbacks

Brandon McCarthy becomes just the latest in a long line pf players going from Oakland to Arizona, or vice-versa, after the starting pitcher signed a two-year deal with the Diamondbacks this afternoon.

Share All sharing options for: Brandon McCarthy: Sinkers, Twitters And A Potential Bargain For The Diamondbacks

Now that I'm on the inside of this process, I've done the math and figured out that 96% of all hot stove info & rumors are complete nonsense

McCarthy's Tweet from the other day now makes a good deal more sense. Though I'd put the figure at nearer 90%, given that a quick scour of Google News shows me that his name was linked by gossip, apparently incorrectly, to the (deep breath!) Twins, White Sox, Royals, Cubs, Red Sox, Angels, Tigers and Rangers, as well as re-signing back in Oakland. Anaheim, in particular, was reported to be making a strong push: But the deal reached with Arizona seems very reasonable, and it looks like we avoided, as Kevin Towers said during the winter meetings, "second-tier guys...being paid like first-tier guys."

If McCarthy stays healthy, this could be a real steal for the Diamondbacks. As Dan pointed out, we paid very little more (only $500 K) for him than Joe Blanton received earlier in the week, also for a two-year deal. But over the past two seasons, Blanton's ERA+ is 82, and he has been below replacement level, at -0.1 bWAR (though fWAR likes him a lot better, at 3.0). McCarthy's ERA is 121, and even though he has missed significant playing time through injury, he has still been worth a total of 4.9 bWAR and 6.6 fWAR. Anything like that will be more than acceptable for Arizona, who will pay him a $2.5m signing bonus, than salaries of $4m and $9m for the next two years.

The "if" is the obvious issue, with McCarthy's shoulder in particular, being a factor why he has only 65 appearances over the past five seasons. He reinvented himself late in the 2009 campaign, adding a two-seamer to his repertoire to generate groundballs, and this paid off in 2011, with a season-high 170 innings, as the quicker outs helped him go deeper into games and reduce stress. [ESPN wrote about the metamorphosis - it's a fascinating story, worth a read, which also includes nuggets like McCarthy (and fellow stathead Craig Breslow) forgoing Brad Pitt at the Moneyball premiere, to hang with Bill James, and that McCarthy had our Texas cousins Lone Star Ball bookmarked!]

However, the breakout hit a road-bump this year: he had two stints on the disabled list in 2012, both with shoulder soreness, the second one lasting seven weeks. He was quoted at the time of that as saying, "The last two weeks have been about as mentally harrowing as I have had in my career. Dealing with pain every day is miserable." Hopefully, it's an issue he can avoid for the next couple of years - along with screaming line-drive, like the one that ended his season - and as Brandon v1.0 proved, being able to generate a lot of ground-balls is something that can be very useful in Arizona, where fly-balls tend to travel longer than almost anywhere else.

The signing would appear to reduce significantly the odds of the Diamondbacks trading for a starting pitcher. The added depth McCarthy brings to the rotation would also suggest that any deal Kevin Towers makes to get us a shortstop, is more likely to involve a pitcher, rather than Justin Upton. Right now, the team have Trevor Bauer, Patrick Corbin and Tyler Skaggs for one spot in the rotation, and even that's only needed until Daniel Hudson comes back from Tommy John surgery, likely in the second half. Now, pitching depth is good, certainly - but we can't ignore the issues elsewhere on the team, particularly at short-stop.

Towers seemed somewhat equivocal on that topic, saying that this could make moving a shortstop easier, "in the right deal," but then adding, "If we end up keeping all of our pitching depth, I’m fine with that as well." I think most fans will be happy that we've managed to acquire the veteran front-line starter we wanted, without having to give up anything except money (I'm aiming to have a post over the weekend looking at what the D-backs payroll is now like, after all the maneuvering over the past couple of days). Get us a long-term solution at short-stop, and we'll be ready for spring training, I reckon.

I think I'm going to like having McCarthy on the Diamondbacks. He not only maintains the long line of Brandons to have played for Arizona, being the sixth of that name since Mr. Webb first took the mound in 2003, he is also a fanatical Tweeter - @BMcCarthy32, if you want to join me in giving him a follow. With just shy of a hundred thousand followers, he takes over from Justin Upton (75,000, despite only one Tweet of his own in the past month) at the front of the Diamondbacks pack. Curious to see how the organization reacts - at the very least, it should take some of the Tweet-heat off Trever Bauer! That this is McCarthy's current Twitter profile pic tells you all you need to know... 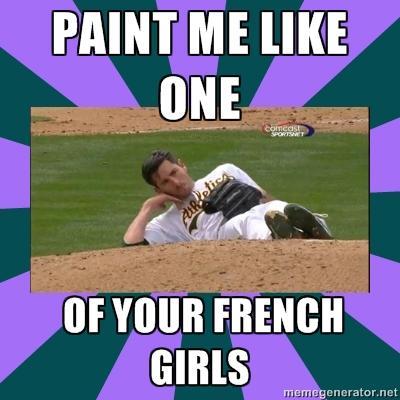 Just snuck outside to do a fart that sounded like a whale sighing. Now I'm ready for dessert.

There are people that are optimistic enough about politicians to dance and sing at campaign HQ. This baffles me.

A three out of ten success rate is great for a hitter in baseball. It's also good if you're my wife parallel parking.

Those helpless two weeks after the cable company changes your channel lineup is prob my best comparison for concussion recovery.