How Have The Diamondbacks Done Under Kevin Towers?

The Bauer trade brought down a storm of criticism on Arizona GM Kevin Towers, with demands for his firing. But how have the Diamondbacks actually fared since his arrival after the 2010 season?

Share All sharing options for: How Have The Diamondbacks Done Under Kevin Towers?

As with managers, it's always a difficult task to evaluate a GM, because the success of a team is not only affected by the talent of the person in question. Most obviously, every team has a budget within which they have to operate. While spending money is no guarantee of success (as we'll see), there's no denying that it does make it easier to compete You can acquire established players, whose performance is more projectable, and you tend to have more wiggle-room to deal with injuries, or if a contract suddenly turns into an albatross.

There is also the fact that almost no GM builds a franchise from the ground up. They acquire an existing portfolio of coaches and players: some can perhaps easily be traded if desired, but that may not be possible for everyone. The farm system, too, is a legacy from the previous front-office. Even if a new GM changes drafting strategy immediately, it will likely be several years before the products of that new approach are ready to help out the team at the major-league level. A solid foundation laid by a previous GM, can make his successor look smarter; or, conversely, a lack of new talent can cause a franchise to struggle, for reasons outwith the current incumbent's control.

But as we saw in reactions to the Bauer trade, a GM's reputation is the absolute epitome of, as Janet Jackson (or Eddie Murphy, depending on taste) put it: "What have you done for me lately?" That the Diamondbacks came within a squib of the National League Championship Series last year, while spending only more than the Pirates and Padres in the league, has apparently all been forgotten. Instead, Towers has often been dismissed as "lucky" at best, and incompetent by many. Let's see if the past two seasons have provided anything to back up those assertions, focusing for data on the simplest input and output: budget and team record.

To do so, we'll introduce the concepts of Marginal Wins and Marginal Payroll, which was originally developed by the late Doug Pappas, for Baseball Prospectus in 2003. This was done to counter a couple of the problems with a simple approach of just dividing wins by payroll: specifically, that a team has to spend some money, and that even a team of complete scrubs is going to win some games. Pappas figured that the least a team could get with spending would be 28 times the major-league minimum (25 for a roster, and three DL spots), and that such a squad would have a .300 winning percentage, or 48.6 games in a season.

To work out a team's efficiency, you take the minimum salary away from actual payroll, and also 48.6 wins off their actual win total. Those give you Marginal Payroll and Marginal Wins, and find the ratio of those - the cost per Marginal Win. I've done the math for 2011-12 combined, taking the Opening Day payrolls and number of wins. One slight adjustment: I used Pythagorean win totals (based on runs scored and allowed) as a better measure of "true" performance. Actual W-L can be skewed by swings in a team's record in one-run games, as we saw both this year and last! It evened out for the D-backs; our two-year Pythag of 174 is just one below the actual tally of 175 wins.

Even without any adjustment for budget, Arizona are doing pretty well. The only National League teams with a better Pythag over the past two seasons are the Brewers (175 wins), Braves (177), Cardinals (181) and Phillies (184). This ties to half the National League having seen post-season play in that time: never mind repeating as World Series champs, simply reaching October again is tough. The nine available slots have gone to eight different teams, with St. Louis the only franchise to reach the postseason both years. The rest of the NL West trail in behind the Diamondbacks as follows: Dodgers (170), Giants (168), Padres (154) and Rockies (146).

If we plot marginal wins against payroll, you can get a better idea of which team is getting most bang for their buck. This chart is shown below, and has been divided up in to four quadrants, with the axes drawn at the median of Marginal Payroll and Pythagorean Wins ($147.7 million and 168 wins respectively). 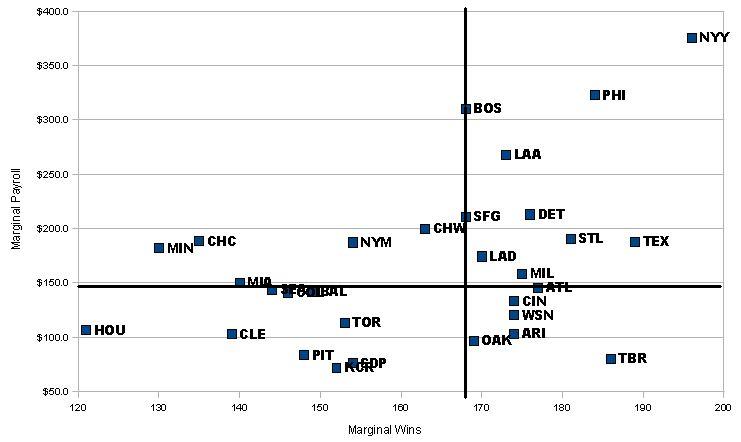 You can look at the four quadrants like this:

There are a couple of these that are no great shock: the Yankees had a marginal payroll of over $375 million: only the Phillies ($322m) and Red Sox ($310m) came within a hundred million dollars of New York's spending in 2010-11. But they won more games than anyone else over that time, so I guess it was worth it. But who would have guessed that the Twins, who used to be an example of small market success, are now a case-study in bloated failure? They've averaged spending of $103.4 million this season and last, but no team in the American League has a worse record, and they are nine games back of the next-worst Cleveland indians.

The Diamondbacks over the past couple of seasons fall solidly into the second category, getting more marginal wins than most, but spending less. Indeed, if you draw a line across from Arizona's dot to the left, you'll see that we actually have spent about $3.4 million less than the Astros in that time - but have picked up an astonishing 53 more victories. And, while there are certainly teams with more victories than the D-backs, all of them have spent more money except for our expansion siblings in Tampa. The Rays have done really well, especially considering their division: 46 more wins than Miami, while on a budget almost $75 million lower over two years.

[As an aside, the overall correlation between payroll and wins over the two campaigns came out at 0.42, so there is a definite connection. However, it also means that only about 18% of a team's win total can be explained by a linear relationship between salary and wins. So there are a lot of other factors in play beyond payroll.]

Next, let's drill down, figure out how much each team paid, in payroll over minimum, for each win over minimum. There's a very wide range here, with the 30th-placed team spending more than six times as much as the least generous. Here's the full list, with the cost in millions of marginal dollars paid by a team for each marginal win.

The two extremes hammer home just how much of a difference there can be. I'd be hard pushed to argue that the Rays' GM Andrew Friedman is the most-savvy GM in the majors, given their success and the ferocious spending of their division rival Red Sox and and Yankees. It might be more of a surprise to see the Royals coming out in second-place, but they have spent less cash over the past two seasons than any other franchise, and are the only team with a total less than $100 million. On that basis, coming out with more Pythagorean wins than nine other teams is not bad at all.

Spots #3-5 are basically identical in efficiency, separated by the loose change from Brian Cashman's sofa, only $10,000 per win between them. It's interesting to see Arizona under Kevin Towers actually coming out ahead of the A's and Billy Beane. Cue a movie about the Diamondbacks in 3...2...1... Or not. :) The Nationals, in sixth are now reaping dividends out of the draft picks that resulted from the lean years: most obviously, Stephen Strasburg and Bryce Harper were worth 9.2 fWAR combined this season, yet didn't get paid like it. Suspect they are likely to continue climbing this chart next year.

Dropping down to the bottom end of the table, we find the Yankees and Red Sox next to each other, in 26th and 27th place respectively. However, that does demonstrate why it's important not just to consider the M$/MWin figure, because New York made the post-season both times, while Boston fell short. Even if you're paying round about the same amount per win, not all wins are created equal... Below them, the Astros prove that, if you're putting out a team perilously close to replacement level, any cost is too much. The only sides spending more per win are the Twins, whom we already discussed, and the Cubs. Let's all laugh at the Cubs, shall we? 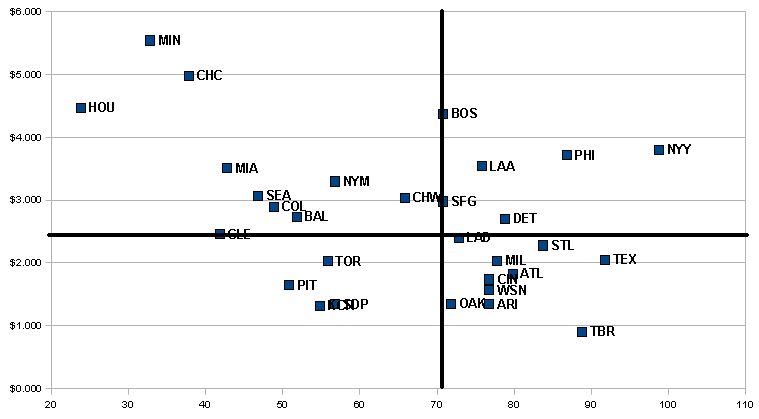 Back in 2003, Pappas characterized the four quadrants as follows:

It's also instructive to compare the D-backs efficiency over the past two years (M$1.340 million per marginal win) with the figures put up in 2010 (2.427) and 2009 (2.371). If we plotted that - 2.399 and a total of 46.8 marginal wins - the closest dot would probably be... I dunno, somewhere around Cleveland, I guess? [Nowhere anyone wants to be, that's for sure!] Suffice it to say that the team has done substantially better, by this metric at least, in the Towers era. Does this mean it is guaranteed that we will continue to do in future? Absolutely not. But it's impossible to deny that KT has had significant success so far; maybe we should hold off pillorying him until we see a losing season...