Uni Watch has the inside scoop on all 30 teams' new batting practice and spring training caps - introduced just in time to make the ones you got for Christmas out of date...

The article covers all 36 caps - in case you're wondering, some teams have separate home and road ones, which seems like an unnecessary money-grab to me [oh, look: the Yankees are among those teams. Who'd ever have thought they'd squeeze their fanbase for every cent possible?] There are some interesting choices in there, most obviously the Atlanta Braves opting for something extremely retro, going from the simple A logo, to something almost designed to infuriate Native American activists everywhere: 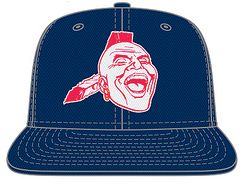 Oh, my... I'm not exactly the most politically-correct of people, but even I would be dubious about wandering round Salt River Fields [land owned by the Salt River Pima-Maricopa Indian Community] with that on my head; though maybe things are different in Florida, where the Braves have their spring training. But even there, the Cleveland Indians have gone for a simple blue C on a red background, rather than a screenshot from Last of the Mohicans. There are a few other franchises which have adopted a throwback style though, such as Oakland, who have an elephant on their caps, and the Mets have their mascot, Mr. Met.

But on to the Diamondbacks. Here's the new design. along with what the old caps looked like:

Uni Watch is quite glowing in praise, giving it an "A" grade, and saying "Really nice mix of the team's original logo and its current color scheme. Well done." Regular fans will probably be going "Eh?" to that - since it's the same combination of logo and color which has been seen all over the place since the big change for the 2007 season. Still, must be said that I do quite like the color scheme: the two-tone approach seems quite popular in this year's models, and there are certainly worse combinations of shades out there. Looking at the pic, it does appear they have changed the shade of red, but that may just be an "artist's impression." We'll see when the full caps appear.

47 days until pitchers and catchers report, people. And single-game tickets for spring training games at Salt River Fields, go on sale to the public a week Saturday (January 5th) at 10 a.m. MST...