Fall Of The House Of SnakePit

The annual SnakePit outing to the Arizona Fall League took place last night. After last year's Frostbitepalooza, we were hoping for slightly better weather conditions to enjoy the action. Were we successful? Well... Yes and no....

Share All sharing options for: Fall Of The House Of SnakePit

The weather forecast claimed only a 10% chance of rain, which was largely at odds with the sky, black as a Carlos Zambrano mood ring. And little drops started falling on the windshield as we hit the freeway, heading up the 101 towards Salt River Fields. Still, having survived the Great Freeze of 2011, a little water wouldn't put us off - as long as the players were on the field, we'd be there too. And, besides, that's what the stands are for, even if it's not often in Arizona that the roof is appreciated for its protection against precipitation rather than sun. Still, one of those nights where it was better to be a spectator than a player, as this animated GIF shows:

Fortunately, that was only a temporary worst, but it was enough to send the less hardy spectators from the uncovered seats back, leaving largely a ring of moist emptiness around the pitch. Though Superfan Susan, of course, was one of the few, the happy few, who would not be be moved. We opted for a dry spot to begin with, due to the presence of coco Jr. in our party. That's our excuse, anyway, and we're sticking to it. Also present were both of soco Jr's parents, the kishis, Asteroid, myself and Mrs. SnakePit, with self-proclaimed Pick 6 anti-guru Tabor36 joining us in progress.

The attendance was officially announced as 1,326, which was almost four times the crowd for last year's excursion, as we discovered when we tried to park, ending up somewhere in the middle of a soccer field. A good part of the reason, it seems was Chandler Chamber of Commerce having organized a "Young Professionals Night" for the game, which included former SnakePit ticket guy, Mike Dellosa speaking. If we'd known about that - okay, that and the dollar beers also included - we might have mounted a raid on to the upstairs patio. Young Professionals? Pah. Who needs them, when you have Middle-Aged Amateurs?

Interesting to see Rick Schu - not one of the listed coaches - in the Rafters dugout alongside Matt Williams. Was this coverage in case Matty got the Rockies' managerial post? (he didn't) Or is Schu possibly in line for the additional hitting coach's job the Diamondbacks are looking to fill this winter?

We had the good fortune to see most of the Diamondbacks prospects on the Rafters in action. Chris Owings was batting leadoff and playing shortstop, while Matt Davidson was the team's designated hitter for the night. Pitcher Chase Anderson was the starter - he has been receiving rave reviews, named AFL Pitcher of the Week at the end of October. and selected to the Rising Stars game at SRF last Saturday. And reliever Kevin Munson came in to work the ninth inning for the Rafters. As we'll see, their evenings had rather different outcomes.

Things started brightly, with Owings singling to lead off the Rafters in the bottom of the first, then scoring immediately, on a double by the Nationals' Anthony Rendon, the 6th overall pick in last year's draft. However, it would be 25 more outs until the Rafters put another run on the board, that coming on Davidson's second home-run of the AFL, with one down in the ninth. when he drove a ball on to the left-field berm. He ended the game having gone 1-for-4 with his home-run, and Owings went 1-for-5, both men striking out twice. 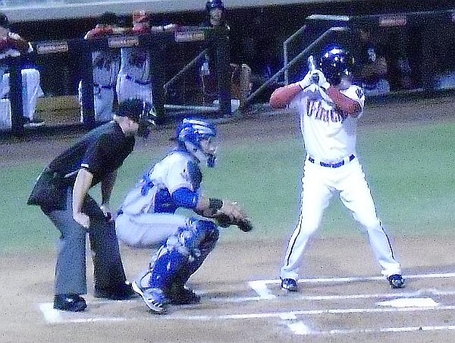 Anderson was very solid early on too. Through two outs in the fourth inning, he had given up only one hit, a single, with two walks and three strikeouts. However, he then seemed to flag, allowing three consecutive hits to tie the game. He was lifted with two outs in the fifth, but the Rafters bullpen did him no favors, Washington reliever Paul Demny allowing the runner on first to score before recording the third out. Anderson's final line for the night was 4.2 innings, with two runs allowed, both earned, on five hits and two walks, with four K's. His overall AFL stats remain good, with a 3.44 ERA and K:BB ratio of 23:7 in 18.1 innings.

It wasn't such a good night for Munson, who was brought in for the final frame, with the Surprise Saguaros holding a 3-1 lead. He walked the first two batters faced, and the third reached on a bunt, loading the bases with no outs. Munson almost escaped damage, getting a shallow fly-ball and a swinging strikeout, but a two-run single followed before he could get the third out. That proved crucial insurance for the Saguaros, as Davidson's homer was part of a three-run ninth for Scottsdale, but Owings made the last out of the night, representing the tying run at the plate, striking out on a foul tip, to make the final score Surprise 5, Salt River 4. 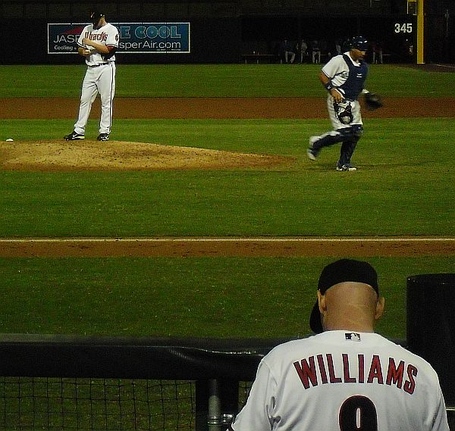 Despite the defeat, the River Rafters still led the East division of the Fall League by one and half games over the Scottsdale Scorpions. With six games left to play, going into this afternoon's contest against the Mesa Solar Sox, there's a good chance they'll make it to the championship game a week tomorrow, most likely against the Peoria Javelinas. [Update: the Rafters lost today, but so did the Scorpions, so the margin remains the same, but with only five games on the schedule]

Out in the stands, we were snacking on leftover Halloween candy, and being supportive of the D-backs in our own, ah, "unique" way. Tabor told us that Chris Owings found it distracting if people chanted his name when he was in the batter's box. Inevitably, this meant that we cheered his at-bats wildly if he was not in the box, then fell completely silent when he was. Step out after a foul? Rapturous applause. Step in? Monk-like silence. Even if we were simply trying to be helpful, I think we succeeded in confusing just about everyone in the park - except the young professionals, for whom the $1 beers on the upper deck were clearly flowing...

It was, as ever, a bittersweet occasion. There's nothing quite like watching meaningless games with good friends, but there's also the realization that the 2012 baseball season is basically over now, even in Arizona, and for the next four months or so, there'll be nothing but the MLB Network and ESPN Deportes (with Mrs. SnakePit translating the color commentary) to provide our baseball fix. Looks like it's time for hibernation, folks... 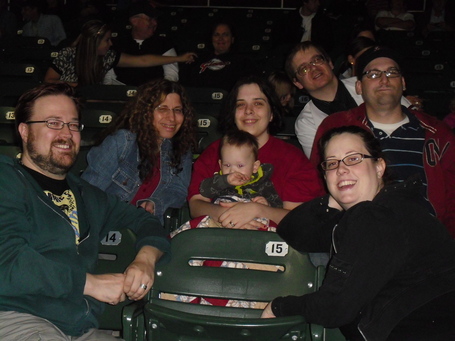