Pit Your Wits Epilogue: A Winner Is You

After 24 weeks, a PYW champion has been crowned, but who is it? Read on!

Share All sharing options for: Pit Your Wits Epilogue: A Winner Is You

So we are here now. This is a statement that is true at any time or place that you say it, but we are here. 25 challenges later and we are ready to crown a Pit Your Wits champion for 2012. It's been a remarkable journey, we've laughed, we've cried, we've found the ratio between laughing and crying to be fluctuating.

Last week, we used piratedan7's challenge of plotting out a fangraph. Now, these are pretty long entries and you just want to see who won the whole thing, so here is a link to it and feel free to browse through it.

In honor of wailord, who began this feature last year, I will use his nicer looking medals for the awards for this challenge.

Gold goes to piratedan7. It's like he thought up the challenge himself. Blimey.

Silver is a joint venture between blank_38 and imstillhungry95

I am going to use an unnecessary paragraph break to tease this.

Yes! Our other resident young'un who needs to get off my lawn back in my day dagnabbit is your 2012 Champion! ISH made a remarkable surge in the second half of the season, scoring 35 points after the All Star Break. I was gonna test for Rec Enhancing Drugs, but all I could use to ship them was FedEx. Irony of ironies!

Here are the final standings! 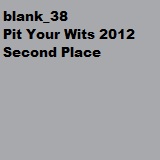 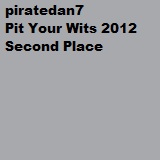 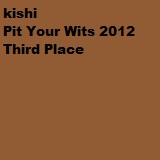 And now a personal award that I give out in a subjective and capricious manner:

This is awarded to soco's entry in Week 10, which probably was the most effort put into any entry this season and, in my opinion, totally worth it.

we have information regarding the cyberian invasion that is now imminent

we aren’t at a safe channel

follow us here and eliminate all trace of this communiqué

Tomorrow is another day.

Watch out for Bizzaro DBacksSkins 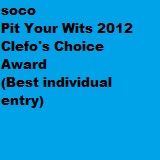 So there we have it. Congratulations to all who won stuff, and I want to send a personal thank you to everyone who participated in some way this season, we had fun, no? We may see you again for more Pit Your Wits in 2013, where it will be ALL SPECIALIZED POETRY CHALLENGES.