A fabulous start by rookie Patrick Corbin was nearly derailed by lack of offense and David Hernandez. But Aaron Hill hit his 26th home run of the year to send the Diamondbacks to just their second walk-off victory.

Patrick Corbin made his final start of his rookie season this evening, start number 17, on his mother's birthday no less. He rewarded her with seven innings of very well-pitched baseball, made up of six great innings and one so-so one. Corbin allowed his only run in the second inning. The inning opened with back-to-back singles by Andrew Brown and DJ LeMahieu. An uncharacteristic error by Gerardo Parra in center field allowed Brown to get to third base, and he scored on a ground ball double play to put the Rockies up 1-0.

But then, between the 2nd and 6th innings, Corbin set down 12 straight Rockies. With one out in the 7th inning, LeMahieu tripled. Charlie Blackmon fouled out, and after a consultation with Charles Nagy, Jonathan Herrera was intentionally walked to bring up the pitcher's spot. Now, normally, in a one-run game in October with your starter already out of the game and 10-12 extra guys on the bench, it's a no-brainer to pinch hit for the reliever... but, this is the Rockies, so they let Guillermo Moscoso hit. Rather, they let him strike out. Corbin threw a beauty of a curve ball to get Moscoso to swing and miss.

Yet Corbin was initially not in line for the win tonight, because stranding baserunners was the order of the evening for the Diamondbacks' hitters. In the 1st, there was a two-out walk by Justin Upton; in the 2nd, a two-out single by Chris Johnson, and in the 3rd, a two-out double by Aaron Hill. I swear I thought they were going to strand a two-out triple in the 4th inning, but Miguel Montero broke that streak by getting a leadoff single, followed by a one-out walk to Jason Kubel. Johnson ended that threat by grounding into a double play. The Diamondbacks went 1-2-3 in the 5th. Jhoulys Chacin clearly had the D'backs' number, but he was then at exactly 75 pitches, so out he goes. The Diamondbacks immediately threatened in the 6th off of Moscoso with back-to-back singles, but a GIDP took care of that momentum.

Then, Patrick Corbin was in line for the win because the Diamondbacks found a way to score in the bottom half of the 7th inning. Kubel led off with a double, his 30th of the year, making him the seventh Diamondback to accomplish that feat. Two batters later, John McDonald took a hanging slider from Moscoso deposited it into the Diamondbacks' bullpen - the fair side! As good of a time as any for Johnny Mac's sixth home run of the year, it gave Arizona 2-1 lead.

Then in the 8th inning came David Hernandez. Normally, this is a good thing, but tonight... not so much. Josh Rutledge singled, Tyler Colvin doubled, and Pacheco's double scored them both and put the Rockies back on top 3-2.

It wasn't looking good for the Diamondbacks when Rex Brothers deposited the hitters 1-2-3 in the 8th. Not only was it 1-2-3, but it was on six pitches. Forgive fans for being skeptical at anything interesting happening in the 9th. After all, the team has only had one other walk-off victory all year.

But MAGIC happened on this fine evening. With one out, McDonald singled. With two outs, Gerardo Parra singled. And after that, Aaron Hill blasted a no-doubt home run to the left field bleachers, giving the Diamondbacks a 5-3 victory over the Colorado Rockies, guaranteeing themselves of no worse than a .500 season. 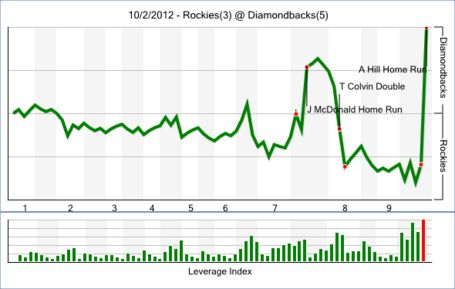 I seem to have re-broken the makeshift rollcall tool today, so, no roll call, but I'm almost positive ish95 lead the pack. [AHA, I fixed it. Yes, he did. I was second, Songbird third. All present were: imstillhungry95, Jim McLennan, xmet, AzDbackfanInDc, asteroid, snakecharmer, piratedan7, SongBird, hotclaws, soco, The so-called Beautiful, Muu, Dan Strittmatter, coldblueAZ, kishi, and Diamondhacks.] asteroid gets COTD today:

If Goldy sits in the dugout visualizing his at-bat

Can we ask him to visualize he’s facing Lincecum?

Well. Here we are. 161 games down; 1 to go. I'll have a more maudlin post about this later this week. For now, I can say that as up and down as it has been watching and recapping this team, I don't know that I'd trade it for much else.

See you all tomorrow at 4:10pm for the last game this year.