Thanks, D-backs. As we went into the seventh inning tonight, I was anticipating a quick finish, and the rest of the evening catching up on Haven, Doctor Who and Dexter off the Tivo. But, noooooo... Here, we are, approaching midnight and I'm still recapping an extra-inning loss. Sheesh. I'm almost not sorry the season is nearly over. Almost... Wade Miley allowed two runs in the eighth inning, to see his 17th win of the season slide away. Though Paul Goldschmidt tied things up in the ninth with his 20th home-run, Brad Bergesen and Mike Zagurski combined for four runs in the 13th, handing the season's longest game to Colorado.

Share All sharing options for: Diamondbacks 5, Rockies 7: The Longest Night

Wade Miley looked to be fully intent on bolstering his Rookie of the Year chances early on, Through the first four innings, he had retired 12 of 13 batters faced, allowing only a two0out single in the first. He had also struck out seven - a tally Miley had passed only three times previously this year. He gave up another two-out hit in the fifth, but stranded the first runner in scoring position he had faced, and retired the Rockies in order in the sixth. At that point - admittedly, with the benefit of hindsight - we could have sent Miley to the showers with a line of six innings, two hits, no runs and eight strikeouts, and in line for that 17th win, with the Diamondbacks two runs up.

However, it was not to be. He allowed a solo home-run to Colorado's slugging catcher Rosario in the seventh: fair enough, and we still had the lead. But a bunt single to lead things off in the eighth inning should really have brought in either David Hernandez or Brad Ziegler - the former was already warming up, and was certainly ready by the time a sacrifice advanced the runner. Miley did get a strikeout for the second out, but disaster then followed. A fly-ball just eluded A.J. Pollock's despairing face-first lunge into the outfield fence, and the next delivery was ripped down the line for another double. The lead had become a deficit in two pitches.

Hernandez then showed up - two batters too late - and picked up his 95th strikeout of the season to end the eighth, leaving Miley with a thoroughly decent line, of three runs on six hits, over 7.2 innings, with no walks and a career-high ten strikeouts. However, he now had no chance of the 17th win, and could only hope for a no-decision at best. Certainly, 16 wins and Miley's 3.33 ERA are nothing to complain about, but I have a feeling that a couple of wins were left on the table, at various points this year.

Initially, it seems as if both teams were in a hurry to be elsewhere. Aaron Hill hammered a hanging change-up with one out in the first, his 25th HR of the year, and Parra went to the opposite field in the fifth. But the Diamondbacks generally didn't handle the Rockies' Drew Pomeranz as well as they had in the series at Coors Field. The Colorado bullpen was also much more solid than we anticipated, retiring 13 hitters in a row at one point, and outside of the two long-balls, the Diamondbacks managed only one hit before the ninth inning. Goldschmidt got Miley off the hook with a one-out homer, giving Goldie twenty for the season, and bringing us bonus baseball for the seventh time.

Brad Ziegler, J.J. Putz and Bryan Shaw all allowed hits but put up zeroes for Arizona in the ninth through twelfth innings, with Shaw going two for the fourth time this year. Shaw threw 33 pitches, a number not surpassed since the 34 it took him to get through his major-league debut in June last year. Between them, they scattered four hits and two walks, but did the needful. The Arizona offense had a couple of hits, Chris Young coming off the bench to get one in the 10th, and John McDonald singled in the ninth, but neither got past first. Again, with hindsight, perhaps a crucial decision came just after Goldschmidt's bomb.

Miguel Montero singled with one out and was pulled for a pinch-runner, Tyler Graham. Graham didn't go anywhere past first, and the replacement of Montero's bat and pitch-calling with Konrad Schmidt probably didn't help things the rest of the way. And when I say "rest of the way," I mean the top of the 13th, when Brad Bergesen and - I know you probably won't believe this - Mike Zagurski combined to allow four runs on three hits, two walks and a pair of wild pitches. Bergesen came in, allowed a double and an RBI single, walked the bases loaded with one out, and Zagurski then allowed all three inherited runners to score, while somehow lowering his own ERA.

Those tack-on runs proved particularly unfortunate, as Arizona then chose to make a game of it. Four of the first five batters reached, on three walks and a single, to bring the Diamondbacks one run closer, and put the tying run on first-base with one out. Birthday boy Chris Johnson hit a sacrifice fly to left, scoring one run but giving up an out [he ended his special day 0-for-5, the only NL player this year and first Arizona hitter ever to be hitless in six PAs on his birthday]. Gerardo Parra then struck out wildly, the 29th strikeout of the evening between the two teams, and the first time since July 21, 2010 both the D-backs and their opponents have had 14+ K's.

It was, by innings, the longest game of the season, and indeed the longest in over two years - that July 2010 game mentioned above went 14 innings. However, at four hours 14 minutes, it was not quite the longest by duration, in part because the early stages galloped past, with the first four innings being done in about an hour. The dubious honor there goes to the 4:19 contest on September 4, where we beat the Giants 8-6 in 11 innings, and Bruce Bochy trotted out eleven different pitchers. Even though this game ran two extra innings, Colorado used just eight and Arizona only seven. 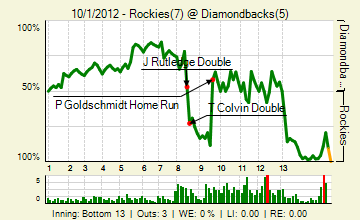 Courtesy of Eric Simon and 'charmer, we have a roll-call! Sort of. Still needs some manual tinkering, but it's an awful lot better than having to try and tally things by hand. Which you know is so not going to happen after a game like tonight. I actually came top for once, despite the absence of an X key on my laptop. imstillhungry95 was second, and 'charmer third, despite being FAR more interested in the A's game. [A wise decision, in the end...] Also present: 4 Corners Fan, BattleMoses, BrokeNBattleX, CaptainCanuck, Diamondhacks, Flexstyle, GuruB, PR151, PatrickPetersonAZ, Ridster09, asteroid, blank_38, coldblueAZ, kishi and piratedan7.

Comment of the night to asteroid, with this early bit of punnery:

Which is where I’m sitting.

We'll be back tomorrow night, as we see if we can go back above .500. Arizona now needs to win the remaining two games to have a winning record this season.