And so we prepare for the end of another long season, one that ends not with a bang, but with a whimper. But that's okay, because as Nyjer Morgan taught us last year, sometimes seasons that end with bangs aren't always that fun. No one wants to read another series preview about the Rockies, given that this series means virtually nothing for either team. So instead, I'll present to you the manuscript of one final clubhouse meeting, before the 2012 Diamondbacks skulk quietly into the night once and for all.

Diamondbacks Clubhouse- Before the final series of the year.

Adam Eaton: "So d'ya think it would be a good idea to let Mr. Kendrick know about my hand injury? I mean, since he's the owner of the team and all, he deserves to know, right?"

Chris Johnson: "What're you guys talking about over there?"

Johnson: "Why is everyone's still calling me that? Half of this team just arrived from Reno last month! Hell, I've been here for longer than you have, Adam!"

Gibson: "First things first, I know the end of the season is right around the corner, but we still have one more series and we can't afford to take the Rockies lightly."

Miguel Montero: "Yeah, like there has literally not been a series all year that matters any less than this one. If we can't take this lightly, what can we take lightly?"

Aaron Hill: "Plus, the Rockies are kinda terrible."

Upton: "I'm not sayin' their pitching is bad, but Drew Pomeranz literally gave up three runs during the ride to Chase Field from the Sheraton."

Gibson: "Ok, ok, fine. Feel free to just do whatever in this series. Gerardo, ignore as many cut-off men as you want. Miggy, swing as hard as your 3-0 greenlight-loving heart desires. If you want to just go crazy, Justin, feel free to even get your uniform dirty. But I called this meeting for reasons far more important than the Rockies."

Gibson: "So, we're almost to the end of another long season."

Tyler Graham: "God, tell me about it. I'm just exhausted."

Gibson: "I won't lie to all of you, this wasn't the season I was hoping for. Hell, I don't think any of us were hoping for a third-place finish behind the f**kin' Dodgers and Giants. I took some of the credit when we won last year, and I deserve some of the blame for what happened this year. I know I can manage better than I did this year, just like I know each and every one of you can play better than you did this year."

"Which is why, starting in February, we're working harder than ever before. Because I know that you men are too damn talented to be looking up at the Dodgers and Giants. You work for everything you have in this world, men. And you all better come ready to work next year, because I want a pennant! WHO'S WITH ME!"

Gibson: "And speaking of next year, here's general manager Kevin Towers to let you guys know what's going to be happening over the winter and to introduce our very special guest speaker."

Kevin Towers: "When I first put this group together, I really thought you guys would take the next step. And the fact that you didn't has as much to do with me as it does any of you. Sure, injuries were a factor, as was bad luck, but we have to keep moving forward. And that means more moves are coming this offseason."

Upton: "Who the hell is Elvis? My name's Justin."

Towers: "Right. Justin. Sorry. Just...thinking ahead to the offseason already."

"But I guess what I'm trying to say is this: no matter what happens, you can never have too many relievers."

Towers: "You heard me. I'll see you all in the spring. But before I go, here's a special guest who wanted to say a few words to you guys." 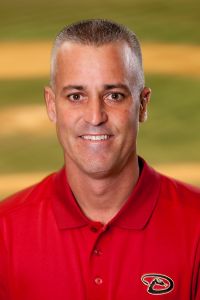 Montero: "I thought you weren't allowed to be here?"

Towers: "He's not, Ken and his friends don't know about this. But he contacted us through discreet channels, and Gibby and I thought, 'Hey, why not?"

Sutton: "I don't have long before Ken finds out and makes me go back to [REDACTED], I just wanted to say a few words:"

"But, at the same time, you don't win (at least) 80 games without a lot of things going right, and I think those don't always get celebrated in seasons like this. I mean, where would this team be without someone like Wade Miley, the Rookie of the Year in all of our hearts, whether the media acknowledges it or not."

Sutton: "Think back to the beginning of the season for a minute. Back then, no one was sure whether Paul Goldschmidt was just a half-season fluke. I think we have a much better idea of that now. Thanks for being an absolute mensch this year, Paul."

Sutton: "Mazel Tov. And what about the best hitting second baseman in all of baseball, who did something that only 294 players have done in the entire history of baseball...and then did it again less than a month later for good measure. Thanks for making history, Aaron."

"I've been with this team for six seasons now. Some of you have been on the team for that entire time, while others of you are so new I've never called a game of yours. And I've seen a lot during that time: I've seen a team win put up the best record in the NL despite getting outscored. I've seen a bunt turn into an inside-the-park home run, and I've seen a no-hitter where the pitcher walked eight guys. And I've seen a lot of you grow up and come together. Particularly you two, Justin and Chris."

Upton and Young: /do Troy and Abed-style handshake.

"But, I've never seen a Diamondback team with as much talent as you guys have. You showed everyone that last year, when you won 94 games and were a Nyjer Morgan single away from having home-field advantage in the NLCS. With a little luck, a little health (I'm looking at you, Justin), and a lot of heart, this team can win a World Series. Now, I'm not saying that it'll happen next year, or even at all. That's up to you guys. But I know this: I don't envy the 2013 Giants or Dodgers."

"Thank you for your time. Now, go out there and do what Brandon Webb used to do to Rockies hitters not named Brad Hawpe!"

Eaton: "That was cool and inspiring and all, but who the hell is Brandon Webb?"

Hill: "I saw his video one afternoon. Apparently, he's a really good fisherman."