OT Sunday: The Hall Of Fame

Share All sharing options for: OT Sunday: The Hall Of Fame

Slightly-less off-topic today than usual: if not a Diamondbacks-related query [and it won't be until Randy Johnson shows up on the 2015 ballot!], it is at least about baseball. The results for the 2012 class in the Hall of Fame will be announced tomorrow. For your consideration, here are this year's candidates, along with their career numbers.

More thoughts on this tricky subject after the jump...

Unlijke the MVP awards, the Baseball Hall of Fame are entirely silent on the matter of what criteria should constitute a suitable candidate. It's thus left entirely up to the eclectic group who make up the college of the BBWAA - and, unlike the actual BBWAA awards, it's not a case of two from each city, with some voters no longer actively covering the sport. Not that this is necessarily a bad thing. After all, we're dealing with players who are no longer actively playing the game. But it does mean there is absolutely no consistency with regard to standards.

Nowhere is this more apparent than when it comes to the matters of PEDs. It's something which has already seen the first ripples reaching the ballot, with the likes of Mark McGwire becoming eligible. And it's only going to get a lot worse. As Grant Brisbee recently pointed out, next year's ballot will include the likes of Sammy Sosa, Roger Clements and the tsar bomba of PED users, Mr. Barry Lamar Bonds (did you know he went to ASU?). Right now, the prospects don't look good for them, going by the numbers received by those predecessors - or even those, like Jeff Bagwell, for whom no solid evidence has emerged.

Personally - and I stress that, since I make absolutely no claim to having "the" answer for what is basically a question or your own moraliry - I am comfortable with that, as I tend to think the Hall of Fame should be a celebration of what's good about the game (hence the question above about its purpose). Certainly, it should acknowledge baseball's darker side, but this does not include enshrining those most directly responsible for it This is especially while there is no mechanism to remove players from Cooperstown - if you think we know the truth about the extent of PED use in the majors, you're more trusting than I.

A common counter-argument is that this relies on a notion that somehow a previous era was pure and unsullied. Obviously, that isn't the case: before there were steroids, there were amphetamines - according to infamous D-back Jason Grimsley, placed in clubhouse coffeepots labeled "leaded" and "unleaded." Various Hall of Famers have admitted to using these. However, as always with a voting award, winners are a product of their time. If the 1941 Oscar was picked now, I suspect Citizen Kane might just beat out How Green Was My Valley. So it is with Cooperstown: amphetamines weren't part of the discussion then.

To me, that doesn't mean PEDs should not be part of the discussion now. We evolve, hopefully in ways that improve our ability to assess players. Players are judged on contemporary standards not those present when Ralph Kiner (an admitted speed user) was elected, in the same way that WAR or UZR are now part of the debate, replacing pitcher wins and ribbies. To me, part of the criteria is whether or not a player cheated. Otherwise, to quote Joe Torre, "It's like letting some guys use metal bats and other guys have to use wood." But this causes another problem: extending Torre's simile, how do we tell who was using metal bats?

It would be a lot easier if, as mentioned above, there were a method to remove inappropriate members. There are plenty of those in there already, mostly from the relatively early days of the Hall, e.g. Ray Schalk or Rabbit Maranville. Instead, the current situation means that, as a result, I am inclined to err on the side of doubt. I'd rather keep honest players out of the Hall of Fame than let cheaters in, so don't need a positive test or an admission, because I don't think it needs criminal levels of "beyond all reasonable doubt." I'm prepared to settle for it being sufficient if the balance of probability is that the player in question took steroids.

Which brings me to Jeff Bagwell, a man for whom there is no direct evidence of steroid abuse. There is, however, an awful lot of circumstantial evidence, starting with his raw numbers These days, I tend to think forty home-runs in a season is about the most any but the very best hitter can legitimately produce on a consistent basis. The last is important, because there are plenty of fluke seasons, even well before the steroid era. For instance, Roger Maris's 1961, where he hit 61 homers - he never had another 40-homer season in his career. The same goes with Hack Wilson's 56 home-runs in 1930. Indeed, Bagwell's 1994 MVP season is another example: before and after, he had 20 HR/.903 OPS and 21/.894. But in the middle, it was 39 HR and a 1.201 OPS.

But averaging 40+ homers over an extended period is very, very hard these days. Over the past three seasons, Albert Pujols is the only player to have done so, hitting 126 home-ruins That's ten more than the second-placed guy, Prince Fielder [incidentally, third is our old friend, former Diamondback Mark Reynolds, on 113. Who knew...] From 1999-2001, Bagwell hit 128 home-runs. So, if you think he was clean, you're basically saying Bagwell was a better power hitter than anyone currently playing in the major-leagues. He was good, sure. But better than Pujols? That, I'm afraid, I just don't credit.

Actually, Pujols' tally - remember, easily more than anyone else over the past three years - was matched or bettered by no less than seven players in the 1999-2001 period when Bagwell was at his peak. One was Todd Helton, who should perhaps get a pass - he didn't need steroids, because he was playing in pre-humidor Denver. [In the first year of the period covered here, 38% more home runs were hit in Coors than at the second-ranked park in the NL] But along with Bagwell, the others are Sammy Sosa, Barry Bonds, Alex Rodriguez, Rafael Palmeiro and Mark McGwire. And Manny Ramirez, at 123, just missed out.

That's pretty much a rogues' gallery of PED abusers. While there may be no 'smoking gun' for Bagwell in terms of a positive drug test, Mitchell report name-check or even tell-all memoir by a former team-mate, when your numbers are generally consistent with those of more or less proven cheats, it's a huge red-flag to me. That's what I'm seeing here. numbers consistent with those produced at the same time by those for whom there certainly is strong evidence of PED abuse. Yes, this is guilt by association, but my mother had a good Scottish saying: if you fly with the crows, you'll be shot with the crows. 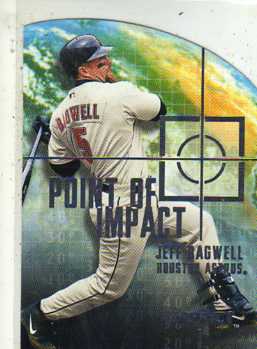 I'd be more inclined to give Bagwell the benefit of the doubt if he had shown power tendencies over the bulk of his career, but that isn't the case. In all of his 210 minor-league games, Bagwell had six home-runs - or "a good week," as Paul Goldschmidt calls it. He did better in the majors, but through his age 30 season - which should cover the best hitting years of his life on just about any aging curve, and did include his MVP campaign - he averaged 28 homers. While good, not exactly Hall of Fame-worthy. But then, from age 31-35, at an age when your production should decline, Bagwell suddenly averaged 40 homers per year - seems like he was growing old disgracefully...

Individually, these points of data wouldn't each mean much, but when considered together, I (again, personally) reckon the balance of probability is that Bagwell did use some illegal means to improve his power numbers in the later stages of his career, and as such, should not be considered for the Hall of Fame. However, I fully accept there are valid counter-points to this position, and I'd love to hear them,