In last week's installment, we spoke to Arizona Diamondbacks' left-hander Joe Paterson about coming to the team from San Francisco, his major-league debut and what he does to prepare to face major-league hitters. In the second part, Joe talks about what goes on in the bullpen, life under Kirk Gibson, and making the post-season in his rookie season.

AZSP: What's the atmosphere like in the bullpen during a game?
JP: Everyone's kinda paying attention, but talking - it goes back and forth between talking about the hitters, and relaxing. I think a lot of guys have different ways of going about it. Some guys don't want to think too much about what's going on, get too worked up two hours before they're going to go in. You'll see, as the game goes on down there, as every inning goes, it gets a little more serious; once you hit the fifth, everyone's pretty locked-in, talking about visitor's scouting reports. But for me at least, I don't want to be down there in the first inning, ready to go, and it's going to be at least an hour or two. I don't think you can be that locked in, that early - I think it's gradual. But different guys are different. I'm sure there are guys down there that are locked-in from pitch one.

AZSP: J.J. Putz was the veteran down there, but also has a real reputation as a prankster. Was he the leader of the bullpen?
JP: He definitely was our leader, no doubt, but he does little jokes: everyone knows about the bubblegum! He usually comes down a couple of innings into the game - a lot of closers do that. In the bullpen, there's a lot of jokes - especially on the receiving end, being a rookie, but everything's in good spirits. There's no doubt J.J. was our leader, he was great to all of us. He really taught me how, in the major leagues, you go about getting ready for a game. It was a dream come true to play last season, and it was fun to have J.J. as the leader of the team during your rookie year. You couldn't ask for a better situation.

AZSP: We've seen the pictures of the rookie hazing this year, in which you had to wear bikinis. That must have been an interesting experience!
JP: [Laughs] Yeah, that was! But you look through the Internet and you see every team has something. We're leaving in our bikinis - I think we were playing the Padres and they were leaving. It's all in fun, nothing too bad: just getting on the plane in our bikinis!

AZSP: I think last year they did Speedos, I don't know if you'd have preferred that!
JP: I think no matter what you do, you're going to be showing skin, and it's not going to be comfortable! I think it's designed for that, so I don't know if it really matters which year... You're going to be wearing something crazy. But it was fun; hearing the rookies talk, you're still in the major-leagues, even if you're wearing that. You'd go for it any day: rather than going on a bus-ride in the minors, you're in the major-leagues on a plane. In a bikini, but it can't get any better than that!

AZSP: The Diamondbacks didn't start 2011 too well, but seemed to improve as the schedule went on. Could you see a change in the play, the attitude, etc?
JP: It was partly confidence. I felt like we had the confidence: we had a tough stretch, then everything starts falling your way, and the ball keep rolling. I think being on the team, you don't notice that much. Obviously, you start noticing you're winning, and it becomes a normal thing. You like it, and you start to believe in it more. But the way we came into spring training, and the way they talked, you felt like that the whole time. I know our spring training was awful, but every talk we had, every time we got together, it was all about how good we were going to be, and just keep working hard. It was also so positive the whole time, even in spring training. You knew we were losing, but it felt like we were getting better, and you took positives out of it. Once the season hit, and we hit our stride, it really shows how that kind of thing helps with our mind-set. The ball started rolling, and we went with it. 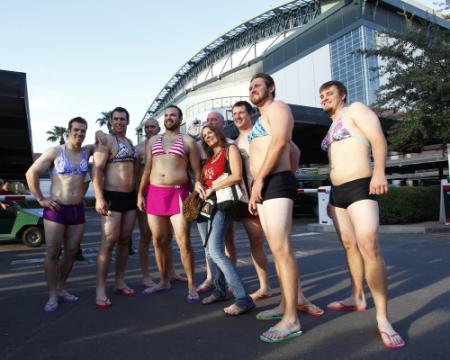 AZSP: What is Kirk Gibson like as a manager? Did you have much interaction with him?
JP: Yeah, during BP, he walks around talks to just about everybody that's out there. A lot of times in baseball, it seems that pitchers are basically dealing with the pitching coach, and everyone else interacts with the manager. But he was really into everything: off the field or on the airplane. He really interacted with everybody, and that was great. More, you're talking with the pitching coach and the bullpen coach, so Nags (Charles Nagy) and (Glenn) Sherlock, those guys we're talking to non-stop, all the time. But it was really cool that Gibby was going around during BP, so that was great, it was a good experience.

AZSP: I'm sure you've learned a lot over the course of the year. What were the most important things?
JP: I'm not sure. You do learn a lot. I'm sure it's different for every pitcher, it feels like it's crazy at every level, with a different approach to pitching to guys, they're looking for a different thing. So I was adjusting to that, at the major-league level. Getting ready for a game, and the way you pitch, at every level it changes a little bit, and I was learning that. They always say the league starts adjusting to you and you have to start adjusting back. I think it was during the middle stretch of the year, when I felt nothing was working - adjusting and working through that. Which you do at every level; you have streaks where it feels like it just goes bad. In the major-leagues, there's a bit more pressure, some more eyes on you. Once you go through something like that, you go into the next season with a little more confidence, because you know if it happens - which most every year it does - you have the hope and belief that you can stop the bleeding a little quicker and move on, make it a better year for you, and hopefully the team as well.

AZSP: Obviously, it didn't end how you'd want, but how was the playoff experience?
JP: Yes, simply because the energy is just so different from the regular season. For me, the first game, the first BP, it was like my major-league debut, where you're looking around, noticing everything. The next day, you go back out and it's baseball again. But it's a different energy, you're excited, feel you can get warmed up a bit quicker. I think it's like that with September too. It's extremely fun to go to the ballpark when you have a lead, or you're competing for a spot. The intensity goes up a little bit, and it's so much fun to be a part of. The playoffs in your first year, that's cool - and that I even got to go in and throw, was something I'll always remember. It really drives you to get back there the next year. Some of the guys had playoff experience, but for us young guys, I know we all go back wanting that, do as much as we can to make the team and go on, because you want that feeling again. It was unbelievable.

AZSP: What are your hopes, expectations and goals for 2012?
JP: It's always to make the team and have a better year than I did this year, and for the team to do better than we did last year. You never want to take a step back, so your goals are a couple of notches above what you did the year before, and what the team did. You could really tell this off-season, just paying attention to what the Diamondbacks are doing, really making some moves to get better. It's exciting. You go to Spring Training, there's a couple more lefties than there was last year, that makes the whole team better, even just in my little spot as a left-handed bullpen pitcher. At every position down the line, once you get a bit of competition, it makes everyone better. For me, being a second-year guy, I have no idea what somebody's thinking, so you go in with the mindset that you need to battle for your spot and go from there. It'll be an exciting year, I know for the Diamondbacks, and I look forward to being at Spring Training, working out again and being with those guys.

AZSP: You got to see a lot of cities and parks this year. Which were your favorites and least favorites?
JP: I like any of the parks that have a great fanbase and are sold-out, like Philadelphia, St. Louis, San Francisco. Those are just fun games to be a part of, when the crowd's that loud - there's so much electricity in the air that it's awesome to play. Some of the places that don't have as many people - it's still exciting, you're in a major-league game... But the crowd takes it to a whole other level.

AZSP: Off the field, what are the best and worst things about life in the majors?
JP: Coming from the minor-leagues, which everyone does, it's a lot easier just to play. Instead of going on bus-trips, or your flight leaving at four in the morning, when you leave, you go at a decent hour - if it's early, it's nine a.m. It's not that hard to get up for, and it's definitely not four a.m., from a little airport in a puddle-jumper! It's more comfortable to do the travel. and when you stay at places - you're not having a room-mate and staying at a Days Inn motel. You'd don't really think about that part of it when you're in the major-leagues, because it's so much nicer than the minor-leagues. The worst part? I don't know. I would have ever to complain about playing in the major-leagues! It's just a lot better.

AZSP: Are you already anticipating getting back to Salt River Fields?
JP: Oh, yeah - it's exciting! Especially being here, you've got to do a lot of your stuff inside. So going there, being outside, and with all the guys, it's fun. You train to do all this on your own, and once you get there, the competition starts, it's the next step - that part of your game kicks in, the competition level, then you're ready to go for the season. I'm extremely excited. Last year was such a great year, you didn't want it to end, so you want to get back as soon as you can and start all over again.

Thanks again to Joe, and also Jordan, for their time and helping with the interview.