There were a lot of good things about 2012 for Diamondbacks fans. One undeniable plus was the arrival of Joe Paterson as our lefty specialist - a troublesome spot in the bullpen over the past few years. A Rule 5 pick from the San Francisco Giants, Paterson made his first appearance in the opening series against Colorado, and had great rookie season, posting a 2.91 ERA over 62 games. We had the chance to chat to Joe about coming over to the Diamondbacks, his big-league debut and recent pwnership of Prince Fielder.

AZ SnakePit: What have you been up to this off-season?
Joe Paterson: The first couple of weeks to a month is just resting, then slowly getting back into training. We're back at home in Oregon - we actually had an extremely dry December, so it was nice to get out, work outside for a change. My wife and I are both from Oregon, so we always come back and I get my training in with my old coaches here.

AZSP: Going back to this point last year, did you think there was a chance you might be taken in the Rule 5 draft?
JP: I thought about it a little bit, when I was in the Arizona Fall League, and they assigned everyone to the 40-man roster, and I wasn't. When you're not put on the 40-man, and you feel you're doing things just as well as the other guys who are put on - I liked the Giants at that point, but you kinda hope that something happens. So I thought maybe I had a chance, but after that, I didn't think about it until the phone rang, the morning of the draft. I got a call from some of the front-office people for the Giants telling me that I was picked, and that they appreciated me being there, and the hard work I'd put in, and they wished me the best of luck. Soon after, I heard from the Diamondbacks - it was a pretty exciting morning.

AZSP: You went from the reigning World Champions to a team that had just finished back-to-back last places in the division...
JP: And I instantly became a huge Diamondbacks fan! When a team gives you a huge chance like that, you're so grateful that you even get a look - I'd never even been invited to big league spring training before, so it was a whole different opportunity that I'd never been given. One of the main reason that I wasn't going to get a shot with the Giants was that they'd signed Javier Lopez. I was looking at the Diamondbacks roster; they had lefties, but they didn't have a true leftie specialist. I figured that if I did what I could do, and they wanted a leftie specialist, I had a good chance of making the team, so it was a great opportunity and a great situation for me to be in.

AZSP: Was there any extra pressure on you in spring, knowing you had to make the roster or be offered back to the Giants?
JP: Not particularly - just the pressure of wanting to make a major-league team. The biggest pressure is really when you start to 'smell the finish line', once you get to Triple-A. So it was no different pressure than I felt all that year in Triple-A. You usually have a lot of good friends - at that point, I'd played for four years, and I had so many friends in the minor leagues with the Giants, that you kinda look at it like, if it doesn't work out, I can just go back. But I think you're perhaps trying a little too hard. I think the way I came in to the Diamondbacks, and the way they treated me - I wasn't expecting it, and it just put me at ease. Like I said, it was the perfect situation for the kind of person I am.

AZSP: When did you hear you were on the Opening Day roster?
JP: On the day we were leaving for Denver, they told me. So I came with my bags packed, either to go to, what I would assume would have been Fresno or Denver - either with the major-league team or back to the Giants. It was probably the most nervewracking of the whole experience, that day and the morning. I don't sleep, and then you come in, did a full workout before I even heard. Then Gibby called me in, I went into his office and told me I made the team. It's something you've always dreamed about, so for that to come true is pretty cool.

AZSP: You made your debut in the second game of the season, at Coors Field. What do you remember about that experience?
JP: More relief, than excitement - that it's over, and I can consider myself a major-league player. You're still in the bullpen, but you hadn't done anything the day before. The first day, just getting there and doing all that stuff - I think I warmed up in the eighth, but it ended up, Aaron Heilman struck the guy out to get the third out and I was warming up to get the guy on deck [Todd Helton!]. That day was pretty nerve-wracking. I'm glad I got up, and was going to be thrown into a pretty sticky situation, because I think for the next day, it really calmed my nerves. After you get in, you're ready to roll. You became a major-leaguer, and now you're ready to get to work. You remember it a lot because you notice all the fans the first, but it's a relief that you can get back to work and you're playing baseball again. 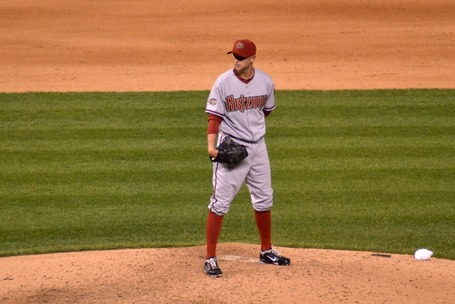 AZSP: In the minors, you mostly worked an inning or more, but this year, you were the left-handed specialist, often brought in for one batter. Was that a significant transition?
JP: I think the way I threw in the Giants organization, you could tell that they were throwing me in spots where I would be a leftie specialist. I'd go in with two outs, bases-loaded to face a leftie. If I got him out, I'd go out for another inning. So I felt like a lot of times I was going into a leftie specialist situation - but then I'd continue to pitch. So it wasn't like I was getting thrown into situation I'd never been in. At first, you throw a third of an inning, you come out, and the adrenalin's still going, you really want to contribute a little bit more. It takes a little bit of getting used to that, just because you have so much adrenalin - especially if one pitch gets you the out. But it's a lot of fun. Usually, if it's a leftie specialist, you're going into not a very comfortable situation, so you feel like you're contributing - going in with runners on, a big-name leftie up there. I had a lot of fun with it, it's a pretty cool opportunity to get to do something like that.

AZSP: As fans, we particularly enjoyed your success against Prince Fielder this year - you've struck him out swinging four times in a row now. What's the secret to that?
JP: I think with all those guys, they're such good hitters, you try to find something that they don't see as well, and you just ride that. The first time I faced him, I threw him an inside fastball, that I thought, even looking at the video, that it was a good pitch, good location - he just turned on it, got a base-hit. You just have to figure it out. Some guys, the first couple of times I faced them, I threw some sliders and they were right on it - so maybe an inside fastball to get them out, a fastball outside. I think different guys see the ball differently off me, so it's just trying to figure it out, what gets the guys out and trying to execute those pitches to the best of your ability.

That's why it's nice, once you get to face teams a little bit more. Sometimes, facing them for the first time, they don't know what you have; but sometimes guys take advantage of that - they've seen the scouting video, and know what you're going to throw to a guy like them. So it's nice to face a guy a couple of times, get a feel for what you need to throw, and as long as you execute, most of the time you get them out - but you make a mistake to a major-league hitter, he's gonna make you pay! I like facing guys multiple times, just knowing it's up to me to execute my pitches. It's easier to go out there with confidence. If you believe you're going to execute your pitch and it doesn't happen, it doesn't happen. But at least you have the thought that you're going to go in there and execute, your confidence is high.

AZSP: When you take the mound for what's a one-out appearance, do you have a clear idea of what you're going to throw, or do you like to improvise as the at-bat develops?
JP: For me, I've always gone in with a plan, and whatever Miggy thought we should go with. A lot of times, if you're feeling good, you just go with what he calls, and a lot of times, that matches up. Sometimes, I go in with a plan, and really want to stick with it, because I know the hitter. So if you get something else, you shake him off, but for the most part, especially in streaks where we're going good, and you're on the same page - I think that goes for every pitcher - you just keep throwing down what he calls. But I think I usually have a plan, and those catchers are so darn smart they know all the hitters. They've been there all game, squatting down there, so you really trust what they're calling.

AZSP: Can you tell us a bit about your preparation? Do you use video, talk to other pitchers, work with Miggy before the game going over the hitters?
JP: You have team meetings and stuff like that; I look at videos, usually every series. I feel that in the beginning, I did a lot of that, but you start to second-guess some of the stuff - so I'll usually just try to get a good idea, and then go with what I feel. If I think I don't know a guy, I'll watch a little bit more video, but I just try and get myself ready physically, and that helps you mentally - you start thinking of different things when you're in the weight-room. That's my time to start making a plan and preparing, visualizing. I like to get there and do a work-out, some running, catch, BP. By game-time, you have an idea of who I'm going to face and what you're going to do. And a good amount of time, that happens - you go in and face the exact guy you've been thinking of - it's all about executing your pitches by then.

Thanks to Joe, and also Jordan, for their time and helping with the interview. Part 2 will follow next Tuesday, covering topics including life in the bullpen, the play-off experience and manager Kirk Gibson.