The score may not show it, but this game was a pitchers' duel for most of the night. Cory Luebke and Ian Kennedy are both known for being strikeout pitchers, and the game lived up to its billing. (Although with the Reunion Weekend festivities starting tomorrow, I don't how much billing this contest actually earned, as the game was sparsely attended at Chase Field and in the Gameday Thread.) With San Francisco having the night off, Arizona returns home looking to put a little more distance in this pennant race. And to be honest, it's looking less like a "race" and more of a "hang out near the finish line."

Read on for more on Ian Kennedy's solid night.

Cory Luebke and Ian Kennedy started their pitchers' duel from the get-go. Kennedy had two strikeouts in the first inning, which passed his career-high (168 Ks) set last year. He obliterated that total with nine more over the rest of the game. In the 2nd, it was clear Ian Kennedy had his good stuff. After he struck out Jason Hermida to end the inning, he stomped off the mound, a good sign he was confident about his pitching. Kennedy had another good stomp after his strikeout of Andy Parrino in the third inning. He didn't get the call on the outside corner, but Parrino could just look on as the curve ball got him. Kennedy struck out seven Padres through five innings, then struck out the side in the 6th. Also during that 6th inning, Ian Kennedy passed 200 innings pitched for the season.

Meanwhile, Cory Luebke was having almost as nice of a game himself. Luebke struck out the side in the first inning around an Aaron Hill single, which extended his hitting streak to 11 games. Luebke had five strikeouts through two innings and eight strikeouts through five innings, one more than Kennedy but with a much higher pitch count. Luebke had 93 pitches after five, and didn't make it out of the 6th. Including the Hill single, the Diamondbacks had precious few chances to score. Ryan Roberts walked and stole second base in the 2nd inning (he also did it in the 8th), and Willie Bloomquist did the same in the 5th inning.

But the Diamondbacks don't need no stinkin' baserunners to score runs. Paul Goldschmidt put Arizona up with a solo home run just over the top of the wall in the 4th inning, during a nice at-bat that Paul took from 0-2 to 3-2. Justin Upton's solo home run to left field in the 6th inning went a bit (10 rows or so) farther than Goldy's. The Diamondbacks added two insurance runs in the 7th inning. Ian Kennedy was hit (in the jersey) by a (breaking) pitch, and Bloomquist singled behind him. Aaron Hill almost ground into a double play, but Willie slid into second base hard and Orlando Hudson threw the ball wide, scoring Kennedy to make it 3-0. Upton was intentionally walked ahead of Miguel Montero, and left-handed reliever Joe Thatcher came in just for him. Montero took that personally and singled to the opposite field to score Hill and make it a 4-0 lead and 16-game hitting streak.

Kennedy went into the 8th inning at only 86 pitches, but he lost it a bit there. The Padres led off with back-to-back singles and with two outs, Will Venable singled to score Nick Hundley and break up the shutout. At 99 pitches, 11 strikeouts (one shy of a career high) and no walks, Kennedy reluctantly left to a standing ovation from the small but happy crowd. I'm not sure Kennedy would've been able to go for the complete game, but he definitely wanted to get out of his own mess. Luckily, Brad Ziegler needed only one pitcher to end the inning. J.J. Putz came in for the save, and after a strange "Cameron Maybin singled to catcher" play (the ball spun out in front of home plate, and Montero jumped too far in front of it to make the clean pickup), he struck out Nick Hundley to nail down the win. 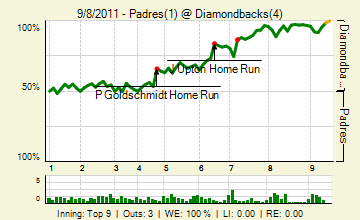 Now that's the kind of fangraph I like to see.. one that doesn't ever sway in the opponent's favor! Chris Young's struggles continue with his 0-for-4 night, Goldschmidt continues to be hot (2-for-4) or cold (the other two were strikeouts), and Ryan Roberts worked three walks and two stolen bases. Justin Upton was replaced by pinch-runner Gerardo Parra due to "illness" and was seen talking to the trainer in the dugout, but Gibson said after the game that he'll be fine tomorrow. Steve Gilbert added that it's just a head cold.

A no-doubter for Comment of the Day tonight, after Goldschmidt homered...

Tonight's win, which was the Diamondbacks' 13th straight at home, officially clinches a winning record for the team was apparently just icing on the cake because I did my math incorrectly, and we clinched a winning season yesterday. Just think about that for a second. This is a team many thought would struggle to get to .500, a team many of us would have been happy to see get to .500. Yet here we are in still-early September, having already clinched a winning season and on pace to win 93 games and the NL West title. Because, why not us?

Tomorrow night is the start of 2001 Reunion Weekend, which kicks off with Game 7 throwback uniforms, white pinstripes and purple t-shirts. Break out the purple and teal! See you tomorrow, folks.