Share All sharing options for: 'Pit Your Wits: Week 23

Egads, almost forgot to put the finishing touches on this week's post. It sat near-completed in a tab all by its lonesome for most of today, all challenge-less and pathetic. Not too much of a write-up for the results of last week, but it's there. The standings are also updated and it appears there's been a bit of a shakeup at the top, with someone dethroning the user that's spent much of this season atop (if not the entire season... not entirely sure). Exciting, isn't it? I thought so. We're getting towards the latter half of this season of 'PYW, so it's interesting to see the top still not solidified. Is that enough incentive to participate this week?

Last week's challenge was pretty simple, so I'll just do a quick rundown of the games. If you remember, everyone had to submit their predictions regarding the outcome of the last six games, and those that correctly guessed the record would receive two bonus points. We dropped the first game of the ('PYW) week against the Giants 4-2, one short of ten straight victories; we took game two against the Giants, 7-2; game three against San Francisco ended the season went to us as well, 4-1; we took game one against Colorado, 10-7; game two went to Colorado, 8-3; and finally, we took the final game against the Rox, 5-3. For those keeping score, we won four and dropped two. This means Swag11, porty99, Rockkstarr12, emilylovesthedbacks, DeDxDbacKxJroK, since_98, Baja F1, and Torpedosneak will receive two points a piece. Congrats.

So, after weeks of holding onto the top spot (shared or otherwise), it appears that blank_38's been usurped by BulldogsNotZags, a user that's hung around the upper echelon of the leaderboard for his fair share of time this season. Relative to that, there's no other huge changes on the leaderboard, other than the fact that we have a legitimate top five this time instead of a top ten (eight tied for third as of last week). So, without further adieu, this week's challenge. And, yes, it's caption time, folks. 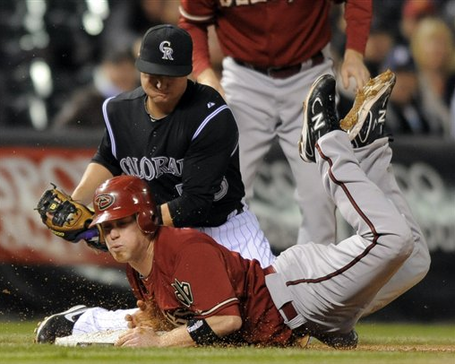