Willie Bloomquist did not make an out on the base-paths this afternoon. However, it seems like he was about the only Diamondback not to do so, as the team ran into 1 1/3 innings of basepath fail. Fortunately, the bats were adequately equipped with antivenom, and dealt with this unexpected epidemic. The B-lineup may have been in this afternoon, yet Geoff Blum, Henry Blanco and Collin Cowgill combined to go 6-for-12, with three walks, four RBI and three runs scored. In Gibby We Trust... Meanwhile, Wade Miley looked like he was getting "humidored" early, but recovered to go seven strong. The bullpen staged their own throwback game to 2010, but Arizona held on to win.

The teams traded solo home-runs in the first inning. With two outs, Justin Upton got into a pitch and deposited his 27th ball of the season into the bleachers - that's a career-high for him, and he is also closing in on his bests for RBI (86, now at 82) and hits (158, at 155). However, Miley struggled with his control earlier, falling 2-0 behind Dexter Fowler, who tied the game up with his third homer [he added a fourth long-ball with two outs in the ninth; all of them this season have come against the D-backs]. Miley then put two Rockies on with one out, but settled down to escape further damage.

The Diamondbacks had another chance to score in the top of the third, but saw Henry Blanco gunned down at the plate, after a Willie Bloomquist single resulted in a highly-questionable decision by Matt Williams to test the arm of CarGo, and send our 40-year old catcher home from second. No prizes for guessing how that worked out. And the Rockies took the lead instead, with another unexpected power display, Mark Ellis hitting his fourth home-run of the year. Some of which have apparently come against other teams.

Arizona came back in the fourth. Paul Goldschmidt walked, Aaron Hill doubled, and Blum singled them both home, to make it 3-2 to the visitors. One out later, Blanco singled, moving Blum to third; Miley came up and put down a bunt, but Blum tried to come home, and was thrown out easily, the second base-runner lost at home by the D-backs. We failed to add on, and wasted a bigger opportunity next time up, with men on the corners and no outs in the fifth. Goldschmidt struck out, Upton was caught stealing second, and Hill popped up to strand the man.

Miley escaped a serious jam in the bottom half, after a lead-off double to Fowler [though there were some debate as to whether the runner overslid the bag, or was pushed off by Hill as the umpire seemed to think] and a walk. That brought up the deadly duo of Cargo and the Tool. However, Cargo grounded out to Goldie, and - joy of joy! - the Tool lined the pitch right to Goldschmidt, who calmly tapped the bag to complete the double-play. Troy-boy looked like someone had taken away his dummy. Priceless.

Princess Momentum opted to stay in the Diamondbacks dugout for the sixth. Blum led off with a home-run, Collin Cowgill singled, Miley drew a walk - his first ever in his entire professional career! - and Bloomquist singled home Cowgill from second (CC can apparently run a little better than Henry. Who knew?). Upton was hit by a pitch for the 17th time this year, tying him for the NL league and leaving him one short of the D-backs franchise record. That loaded the bases, and Goldschmidt emptied them with a double down the line, though probably inevitably, was nailed at third, our fourth out on the basepaths this afternoon.

Meanwhile, Miley had settled down very nicely. Still a few too many baserunners, especially early, and I'm not sure he can continue to strand them with such epic success, but on this occasion, he did. His final line was seven innings, two runs allowed on the pair of solo home-runs, and a total of six hits and three walks, with a solid six strikeouts. It only took him 91 pitches, but with a comfortable 9-2 lead - oh, did I forget to mention he drove in his first major-league RBI with a seventh-inning ground out? - there was no point pushing him further.

Zach Duke replaced him, continuing his role as an expensive mop-up guy. This was his tenth appearance since moving to the bullpen: in eight of those, he has come into the game when the margin was four or more. In his three outings were the D-backs were ahead, we have been leading by five, five and seven. As Dan noted in the thread, his spot on the (obvious disclaimer is obvious) post-season roster, seem perilous at best. Here, he allowed a run on three hits, and escaped further damage thanks to a nice play from Hill.

A Cowgill single returned the lead to its previous seven-run margin, but Micah Owings struggled horribly in the ninth, after getting the first two outs easily enough. He went homer, walk, walk, home, and all of a sudden, it was a three-run game [albeit not a save situation, since to qualify for a three-run save, you have to throw at least an inning]. Bryan Shaw came in, and struck out Kevin Kouzmanoff, to give Arizona their sixth consecutive win over Colorado, and keep the Giants [beating up on the Padres as I write] at bay.

Blum finished the day with three hits - his first such game since August 6 last season, when with the Astros. There were multi-hit days for Bloomquist, Upton, Hill and Cowgill, and every starter bar Miley was on base at least twice, through hits or walks. Outside of a rocky couple of innings from the back-end of our bullpen [Duke and Owings combined to allow five runs in 1.2 innings, on five hits and two walks], this was a solid outing. Happy to see the team avoid any potential let-down from the Giants series and keep the pedal down. 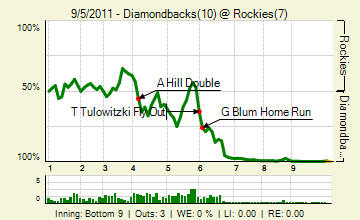 Comment of the day nicely sums up the situation, which is a comfy chair with an extra cushion and cooling beverage close at-hand. Which, by coincidence, is exactly where I'll be spending the rest of the day.

The Giants have scored 7 runs today

And it still doesn’t matter!