It's really nice being in the driver's seat. We're done with the whole "well, yeah, but they won, too". It's all on us right now, and we've been given a three-game set against San Francisco to close this season out. That phrase still weirds me out - how are we the ones closing the season out on top? I'm not going to get ahead of myself, so I'll simply state the situation that we're looking at: before tonight's game, we were up five games with two more against San Francisco (in their own place) and just 24 games left in total. San Francisco and its fans know that a sweep of this three-game set is a must if they wish to contend. After taking one last night off of Joe Saunders, the collective hope of Giants Nation probable went up ever-so-slightly; after all, they were two games away from "getting back into it". They'd have Tim Lincecum on the mound the next night, and the magic could be there again.

Well, it wasn't. Ian Kennedy and Paul Goldschmidt showed the city San Francisco who exactly leads the NL West and why. It's the team that was supposed to be in the cellar in 2011. Now it's the team that's six games up.

Tim Lincecum vs. Ian Kennedy in September in a meaningful game for both teams. Whodathunkit? I doubt I was alone in thinking we'd get to see some fine pitching in a contest between two of the NL West's elite. I can call Ian elite now, right? 'Cause I'm going to. The funny thing, though, is that we did get to see some fine pitching, only it didn't come from Lincecum. Don't get me wrong, Lincecum was horrid or anything, striking out seven Diamondbacks with some nice stuff, but Arizona knocked him around on Saturday night. He went through the first two innings unscathed, but an Aaron Hill double -- his second on the night, mind you, in only the third inning -- brought home Bloomquist and gave the Diamondbacks the first lead of the night. The Giants decided to answer back quickly; Cody Ross, he of the beady eyes, singled to start off the inning for San Francisco, and just two batters later, Carlos Beltran doubled to right, putting Ross on third. Pablo Sandoval scored the run on a sac fly, tying the game up at one and making it all the more interesting.

As soon as the run scored, the game instantly reminded me of a playoff game. I guess I'm getting antsy at this point, but with us fighting against a rival this late into the season and the teams battling back and forth, the game just felt so... playoff-y. It's a feeling I'm not entirely used to (I wasn't as big a fan in 2007), and something that will probably end my life prematurely once if we make it into the actual playoffs. Goldschmidt's playing the role of clutch rookie for our squad at this point, and he continued to murder Lincecum in the fourth. If you don't remember, Paul hit his first career dinger off of The Freak, and his sixth followed the same format. With one down, Goldie absolutely crushed a ball into the deepest part of the park as a righty. Hank Schulman, the beat reporter for the Giants, had the following to say:

The kid's good. He also singled home our third run in the fifth, giving Kennedy a two-run lead to work with. It became increasingly easy to breathe as the night wore on: in the sixth, Ryan Roberts and Gerardo Parra led the inning off with back-to-back doubles, tacking another run on and (more importantly) knocking Lincecum out of the ballgame. Yes, Timmeh went just five against us, giving up five four runs (later five after Parra scored) in the process. Guillermo Mota was brought on to try and clean things up, promptly hitting Bloomquist, walking Hill, and walking Upton with the bases loaded to bring the game to 5-1. The point was made before Mota was terrible that an "off" Lincecum was the better option. Guess they were right.

The game then went quiet until the eighth. You could probably talk about how that's representative of the season, with Giant stagnation simply closing the window of opportunity, but I fear it may be too much of a reach. Regardless, Kennedy continued to be awesome, and by awesome, I mean ace-like. After the Ross single in the third, Kennedy allowed just two more batters to reach on just one hit  (Beltran, snake-killer, singled in the fifth). He pitched seven innings before David Hernandez was called in, and had the game been in Phoenix, Ian would have left to a standing ovation. He dominated the offense of a rival (a weak one, albeit) in September when we needed him to do so. I suppose pitchers like that are make teams like this. Hernandez allowed a run on two hits, but was saved from further damage on a bonehead play from Beltran (summary: he tried to run on Parra). The game was blown open in the ninth, when we added two more on, and a semi-erratic Bryan Shaw closed the game out. Six games up. 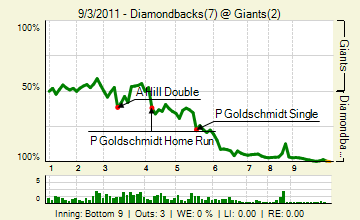 Comment of the Night went to Stile4aly, for the following. It needs no context:

Dan Hudson vs Ryan Vogelsong tomorrow, folks. If we win, we'll be seven games up. I don't wanna get ahead of myself, but if we win tomorrow... it'll be big. Very big.