Share All sharing options for: Diamondbacks Thing of the Week: 2001 World Series Pennants 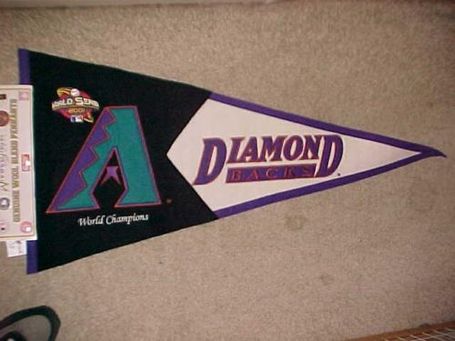 Next weekend is the 2001 re-union, with everyone who was anyone (and some people who weren't really anyone at all) on the World Series winning D-backs team, returning to Chase Field to take part in festivities to mark the tenth anniversary of that epic season. So, figured I should mark the occasion with a TotW that harks back to the magical time of turquoise and purpleness. If you want to have a souvenir of that time - or, rather, quite a few souvenirs of that time - this week's auction should be right up your alley.

WOOL BLEND PENNANT ORIGINAL COST WAS $45-$50. THESE PENNANTS ARE NOT THIN REGULAR PENNANTS. THEY ARE THICK HIGH QUALITY PIECES.

When I saw the price on this one - $500, plus shipping - my immediate reaction was confusion. Was this signed by every member of the team, for example? Made of solid goldf? Or, better yet, woven from Luis Gonzalez's jersey worn in Game 7? That might be worth five hundred bucks. But then I noticed the "100 ct": at first I thought this was some rwally well-refined bullion, confirming my gold hypotheses, but then light dawned, and I realized that the price was not for one pennant, but a box of a hundred. That reduces the price per piece down to a much more reasonable five dollars. Mystery explained.

Or, at least, one mystery. For this really raised more questions than it answers. Where had these hundred pennants been for the past ten years? Or were they of a more recent vintage, produced to coincide with the tenth anniversary? That seems a little more dubious. While there might be a market for these things next weekend at Chase, I can't see too many people outside the state of Arizona wanting to celebrate this occasion - and the seller is located in New England, where I suspect the market for Dbacksmabilia is probably pretty slim.

But if these are genuine 2001 vintage pennants, have they spent the last decade sitting in a dusty warehouse - possibly next to the Ark of the Covenant and a curiously-aging portrait of Craig Counsell? And how did they end up in Massachusetts? Admittedly, that would be the perfect location for them to lie, undisturbed, for ten years, due exactly to the reason states at the end of the previous paragraph. In AZ, they'd be wanted; in NY, they'd be used as fire-lighters; but if, through some mis-directed USPS shipment, they ended up somewhere else, I can see how someone would stash them somewhere and "deal with them later". Much later.

Part of me thinks it would be fun to get these, and sell them outside Chase next weekend. If they are true "antiques" [and in this state, anything older than a decade counts as a heirloom!], then you could probably get ten bucks a pop for them, easily. But could you sell enough of them to justify sweating your extremities off. I think I'll leave this particular auction where it is, but will blow the dust off my never-worn, pristine condition, 2001 World Series Champions T-shirt. Wonder how much that'd be worth?