About an hour ago, it seemed like this would be just another boring recap of a depressing loss to end the regular season.  Heck, that's what it should have been.  Arizona fell behind early as their starter struggled through six innings of work and their offense was shut down by a pitcher who they had tagged for six home runs and 13 earned runs in 23 innings (5.09 ERA) over the four previous times they had faced him this year.  The D-backs feel further behind when they were forced to go to the bullpen, and were down by seven runs late in the game.

This recap was half-written, and it'd maybe be another 20 minutes after the end of the game to slap on the final details before I could post it and go rinse out the bad taste in my mouth from a regular-season finale that Arizona had mailed in.  And why not?  After all, Milwaukee had capped off a victory while Arizona was still in action and the Cardinals had finished their epic overtaking of the sputtering Braves, making the outcome of tonight's game literally irrelevant to the team's post-season path.

I forgot one important detail, though: these are the 2011 Arizona Diamondbacks.  It just wouldn't be a fitting end to this team's regular season without a late-game rally.

The Dodgers struck first in the top of the first inning, beginning with a single from that pesky infant Dee Gordon (if you saw his random celebration with Rod Barajas, you'd get this), who singled to lead things off and promptly stole second base.  Justin Sellers moved him over to third on a groundout, and after Matt Kemp was hit by a pitch, Juan Rivera hit a sac fly to bring in Gordon and put the Dodgers up 1-0.  The D-backs tried to replicate that offensive plan in the bottom of the first, as Willie Bloomquist singled and swiped second for his 20th stolen base of the year, then Aaron Hill moved Bloomquist over on a fly ball to right field.  Unfortunately, Justin Upton's popout to James Loney failed to score Bloomquist and Paul Goldschmidt - who is in the midst of a rather awful stretch of games - struck out to end the threat.

Both the Dodgers and D-backs went down in order in the second inning, but Gordon once again started a rally in the top of the third with a one-out single.  He didn't need to steal second again, as Sellers promptly doubled to left-center, easily scoring Gordon from first.  Kemp and Rivera were retired to end the inning, but the Dodgers were up 2-0.  After Arizona failed to score in the bottom of the third, L.A. struck again in the fourth.  With a runner on first and two out, Jamey Carroll crushed an RBI triple down the right field line, and subsequently scored on an RBI single from Lilly.

The top of the fourth inning ended... strangely.  Lilly tried to steal second on the rocket-armed Henry Blanco, sliding hands-first into second base despite being out by a solid three feet.  On one hand, the last game of the season is as good of a time as any to break your hand as a pitcher, since you wouldn't have to miss any action recovering over the off-season (granted, other such injuries would keep you out a tad longer), but... well, Mark Grace summed it up best: "that might be the dumbest play I've ever seen."

The D-backs had runners in scoring position in both the bottom of the fourth and bottom of the fifth, but failed to score each time.  The Dodgers would prove to be the next team to strike once again, as James Loney teed off on Saunders with one out in the top of the sixth for his 12th home run of the year.  Two more baserunners reached in the sixth but the inning ended without any additional damage, with L.A. now up 5-0.  That ended Saunders' night, an underwhelming performance, with Saunders giving up five runs on nine hits and a homer in six innings, striking out just two batters and hitting another.

Saunders' lackluster regular-season finale opens the door for a debate on just where Saunders should slot in in Arizona's post-season rotation: fourth behind Josh Collmenter, third between Collmenter and Daniel Hudson, or even second right behind Ian Kennedy in order to keep Saunders out of Chase Field?  Should be interesting to see how this unfolds, but something tells me that the most likely outcome will be Joe pitching in Game Three at Chase, keeping together the IPK/Hudson 1/2 tandem but slotting in the veterany Saunders ahead of the rookie Collmenter.

The D-backs brought in the B-lineup C-lineup AAA-lineup for the top of the seventh, with Wade Miley, Sean Burroughs, Collin Cowgill, Robby Hammock, and Cole Gillespie replacing Saunders, Aaron Hill, Chris Young, Justin Upton, and Gerardo Parra.  It was a move faintly reminiscent of my high school basketball career - putting in the fat kid when you're up (or, in the D-backs' case tonight, down) by 30 with two minutes left in the fourth quarter so he feels like a part of the team.  Oh, how I miss high school... (/sarcasm)

Possibly making an audition to be the second lefty out of the bullpen in the post-season, Miley's inning didn't go very well, as he gave up back-to-back one-out extra-base hits to Sellers and Kemp, the latter tattooing a two-run home run to put the Dodgers up 7-0.  It didn't seem like it at the time, but those extra two runs proved to mean a lot more than the minuscule WPA shift would suggest.

WE INTERRUPT THIS REGULARLY-SCHEDULED DEPRESSING RECAP TO BRING YOU:

Just one night after Arizona overcame a five-run deficit in the bottom of the ninth with a two-out rally, could the D-backs really pull off another feat of epic comeback proportions?  Ramon Troncoso took the mound for the Dodgers, and promptly gave Don Mattingly a series of Vietnam-style flashbacks of the horrors that took place on the pitcher's mound in the bottom of the ninth just one night ago.  Troncoso got the first batter, pinch-hitter Lyle Overbay, to ground out for the first out of the inning.

Then things went more bananas than the Peanut Butter Jelly Time video.  Paul Goldschmidt broke out of an epic slump with a line drive single to left field, then Cowgill poked a ground ball single through the right side of the infield to put two on.  Ryan Roberts walked to load the bases, setting up... THIS.  Man, I love Daron's grand slam calls.  Sure, Arizona was still down by three ru-... what's that?  Oh, Henry Blanco came up to the plate and immediately followed it up with THIS?  Well, of course he did.  The deficit was down to two runs, and there was still just out in the inning.  You could almost feel the magic in the air at Chase Field.

Then, the swirling black hole of airborne-ballpark-magic destruction otherwise known as Kenley Jansen strode to the plate and ended the fairy tale.  Sean Burroughs and John McDonald each flied out - heck, just not striking out was an accomplishment - and the game ended with the score frozen at 7-5.  Still, for a game that could have very easily ended 7-0 without anybody being too in too much of a tizzy, it's always great to know that this team will give you nine innings worth of baseball, whether it's in an irrelevant game or Game Seven of the World Series.

The Fangraph doesn't do the bottom of the ninth justice, in my opinion. 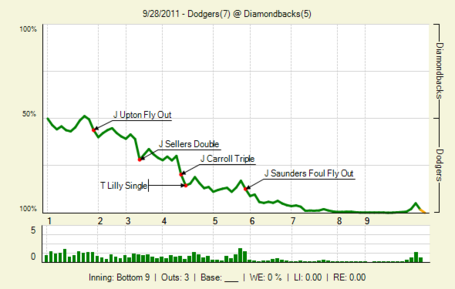 What a great regular season.