Share All sharing options for: Diamondbacks 7, Dodgers 6: Miracles Do Happen

If you expected the post-season picture to clear up as a result of the penultimate day of regular-season games, you'll largely have been disappointed - in both leagues, two teams go into the 162nd game tied for the wild card. And we still have no idea whether we play at home or on the road, after perhaps the most amazing comeback in baseball history. We were five runs behind in the tenth, with the bases empty and down to our last out, only to have six consecutive batters reach base, capped off by Ryan Roberts' grand-slam - RyRo doing the Gibson arm-pump (above) as he rounded the bags...

Overshadowed by a tenth inning that went from nightmare to ecstasy, was Jarrod Parker's arrival in the major-leagues, certainly the most eagerly-awaited event in Diamondbacks' prospect news for quite some time. Sure, we wanted to see Paul Goldschmidt's arrival, but few really knew who he was before the season started. In contrast, this game has been anticipated, almost since Parker was our first-round pick out of high school, in 2007, and it lived up to expectations. Jarrod went 5.2 scoreless innings; he's only the fourth NL debutant to do that in the past five years, following Adalberto Mendez (FLA), Ryan Sadowski (SFG) and James Parr (ATL).

Basically, he was as advertised. Excellent control,. late life, typically living around 94 mph, but with an occasional change-up to keep the hitters honest. He also touched 96 mph, but was also clocked throwing at below 70, which is an impressively-broad range. Jarrod scattered four hits and a walk, though one of the hits was a bad-hop ground-ball which ate up Geoff Blum. Parker was pulled by Gibson after a surprisingly-low 73 pitches, after he walked his first batter of the night, to put men on the corners with two outs in the sixth. Also surprising, was that Parker, who had struck out 7.7 per nine innings in the minors, managed only one K tonight, the opposing pitcher.

However, Jarrod did pick up his first major-league hit. He had come in with the reputation of being a good hitter - or, business as usual for Diamondbacks' starters. And he lived up to that, delivering the team's first extra-base hit of the night, doubling down the right-field line with one out in the fifth. However, he had apparently been taking base-running lessons from Willie Bloomquist, as when Bloomquist flew out to center, Parker had strayed too far off second-base, and was doubled off. As was noted by just about everyone in the Gameday Thread, that base-running blunder makes him officially a member of the 2011 Diamondbacks...

After Parker was lifted, Joe Paterson came in and tidied up, to ensure that Parker's ERA remained a pristine zero. However, the B-bullpen couldn't repeat the feat in the seventh. Ryan Cook allowed two of the three base-runners he faced to reach and was replaced by Alberto Castillo. He did retire his first batter, and it looked like Willie Bloomquist might have had a chance to nail the runner on third, who made a wide turn, but delayed his throw just long enough to let the Dodger scamper back. That came back to bit Arizona, as a single to left-center allowed the Dodgers to score the go-ahead run.

For Arizona, it was definitely a case of "anyone but Kuroda," as the Diamondbacks had been able to do very little against the Dodgers starter. The D-backs had only five base-runners in six innings, no-one getting past second-base, with Parker's hit the only time we'd reached even there with less than two outs. Gerardo Parra, Geoff Blum and Bloomquist [with a hand from Parker] were unable to do anything with the three opportunities we had with RISP, and so entered the bottom of the seventh down a run.

As we saw on Monday, the Dodgers' bullpen is not without its issues, and so it appeared, at least initially in the seventh. Chris Young walked, and Lyle Overbay then drove a ball just over the head of Matt Kemp, to tie the score at one. Another walk followed, and it seemed Arizona were poised to go ahead. However, Ryan Roberts had his second questionable bunt in as many nights. Yesterday, it was questionable timing; tonight, poor execution, as he sent the ball back to the first-baseman, who easily got the force at third. Paul Goldschmidt was called off the bench to pinch-hit... Unfortunately, it was actually a pinch-GIDP, ending the D-backs' threat.

Enough pussy-footing about with the fringe relievers. That was clearly Cap'n Kirk's opinion, as David Hernandez was called upon for the eighth, and destroyed the heart of the Dodgers line-up. The Diamondbacks had more chances in their half of the inning, thanks to a Parra walk and Justin Upton single, but Miguel Montero, much as last night, was over-swinging badly, and K'd as a result. Chris Young took a called strike three, and seemed to have some issues with it, angrily firing the bat and his equipment away afterward.

J.J. Putz made things...interesting in the ninth [it wasn't a save situation, but the book says in a tied game at home, you play for the win and use your closer at this point]. He retired the first two batters easily enough, but then allowed back-to-back singles, to put the go-ahead run in scoring position. Former D-backs heart-throb Aussie Trent Oeltjen pinch-hit - and, yes, he still has that smile! However, after working the count full, Putz fired a split-fingered fastball past him for a called third strike. Despite a lead-off pinch-hit single for Sean Burroughs - his 16th hit off the bench, second in the majors this year - Arizona were unable to score, and we were into free baseball.

It initially seemed we would have been better off saving everyone time and effort, by letting Oeltjen score the run. Firstly, it appeared that Micah Owings does not like free baseball. A broken-bat bloop double was followed by a bunt, but Owings threw the ball wildly past third, attempting to get the runner there: Los Angeles took the lead as a result. The next batter singled, driving in a run, with an error by Young allowing the hitter to advance, and the inning unraveled rapidly from there. The pinnacle was a drive off the right-field fence which somehow rebounded to hit the chasing Upton - making his return after a beaning - in his forehead. About the last thing we wanted to see.

J-Up was dropped by the impact, but did recover his senses, walking off the field under his own steam, and seemed a bit peeved to be removed, which is a good thing. However, by the time the middle of the tenth was reached, the Dodgers had scored five runs off Owings. It looked all but guaranteed that the Diamondbacks' first home play-off game would be Game 3 of the NLDS, next Tuesday night. And also that Owings would lose his first game of the year, blowing his pristine record. This looked even more likely, as the first two Arizona batters were meekly retired, and we were down to our final out.

However, Cole Gillespie legged out an infield hit, aided by the pitcher failing to cover first. Then Montero singled, Young walked, John McDonald reached on a error, and suddenly, the tying run came to the plate, in the shape of Aaron Hill. He drew a walk, making it 6-3, and the winning run was up - Roberts had had a miserable night, and had been struggling badly of late, but absolutely and completely atoned for everything. Ryan wasted no time, cranking the first pitch into the left-field bleachers for the most astonishingly improbable victory in D-backs history, even surpassing the Matinee Miracle from a few seasons back.

Micah somehow escaped with the W, despite allowing five earned runs. He is the first reliever to do that since Ed Whitson for the 1986 Mets, and he worked 3.1 innings. He's the sole pitcher in more than 75 years to get the W for five earned runs in one inning: the last was Jack Knott in 1934. It was a similar scenario there: Knott gave up five in the top of the ninth, only for St. Louis to score six in the bottom half. I'm sure Micah would admit he didn't deserve the W, but barring something unlikely, Owings will end the year 8-0. Only two NL pitchers in the integration era have won more games with zero losses, the last Frank DiPino, who went 9-0 for the '89 Cardinals. 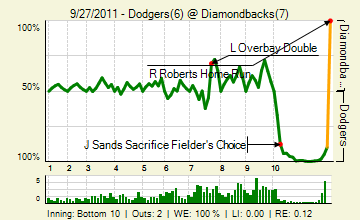 S'funny. I wasn't supposed to be recapping this, but 'Skins had an emergency to handle. His loss is my gain - I'm pretty sure I would otherwise have turned this one off in the middle of the tenth, like a good few other people! Unsurprisingly, the thread can be divided into three categories: the tense pitcher's duel, covering the front nine innings; the FML section, comprising the top of the tenth and first two outs in the bottom half; and the rest, where emotion pretty much matched the Fangraph above.

Comment of the Thread? Got to go with imstillhungry95's comment after Gillespie's infield hit that started things off. It was either eerily predictive or wildly inaccurate, depending on how much sarcasm you care to read into it...

a two out infield hit to make it go on longer

Reading: It's highly overrated!
I <3 Vuvuzelas!!!